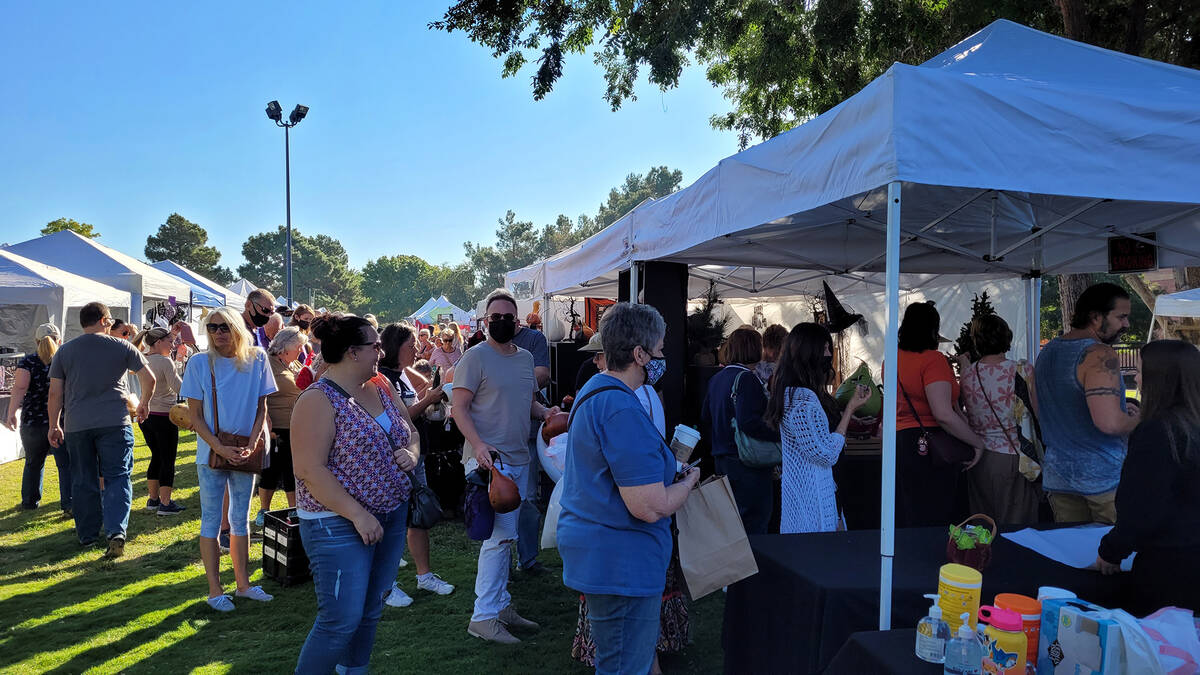 Celia Shortt Goodyear/Boulder City Review The "Out of Our Gourd" booth at Art in the Park was packed with people Saturday, Oct. 2, before the festival opened at 9 a.m.

“After losing out on last year due to the pandemic, our sponsors, vendors, volunteers and the public came out strong in support of Art in the Park, and preliminary counts show that more than 100,000 people descended on Boulder City throughout the two-day event,” said Victoria George, director of marketing and community engagement for the hospital.

The two-day festival is one of the Boulder City Hospital Foundation’s main fundraisers for the nonprofit medical facility. This year’s event, held Saturday and Sunday, honored health care heroes, first responders, employees and volunteers who work to keep the community safe and healthy.

“The best part of this past weekend’s Art in the Park festival was seeing the number of attendees come out after last year’s pandemic pause,” said Thomas Maher, CEO of Boulder City Hospital. “Our vendors, along with the foundation and hospital, are so very grateful to the community at large for their continued support. Festivalgoers were shopping, partaking of the food and beverage vendors, and enjoying being outside. From our community seniors to the tykes in strollers and wagons, there was just pure excitement throughout the festival experience.”

Boulder City Mayor Kiernan McManus said it was “fantastic” to be able to hold Art in the Park and see more people out and about downtown.

“Unfortunately, we’re still at the mercy of the pandemic,” he said. “What we’ve been doing has been helpful to have events like this.”

Art in the Park’s successful return was also felt by local restaurants, which were busy throughout the weekend serving the event’s attendees who stopped by.

Terry Stevens, co-owner of the World Famous Coffee Cup Cafe, said they had a steady stream of customers all weekend.

“It was great,” he said. “It was a success. Everyone was really happy to be out.”

“Business was good,” he said. “We were busy from the time we opened until we closed.”

“Saturday was packed,” she said. “Sunday was more normal.”

George said Art in the Park has generated $200,000 in the past for the hospital foundation.

“It’s too early to tell the total impact of the festival but we will have a full look in the coming weeks,” she said.