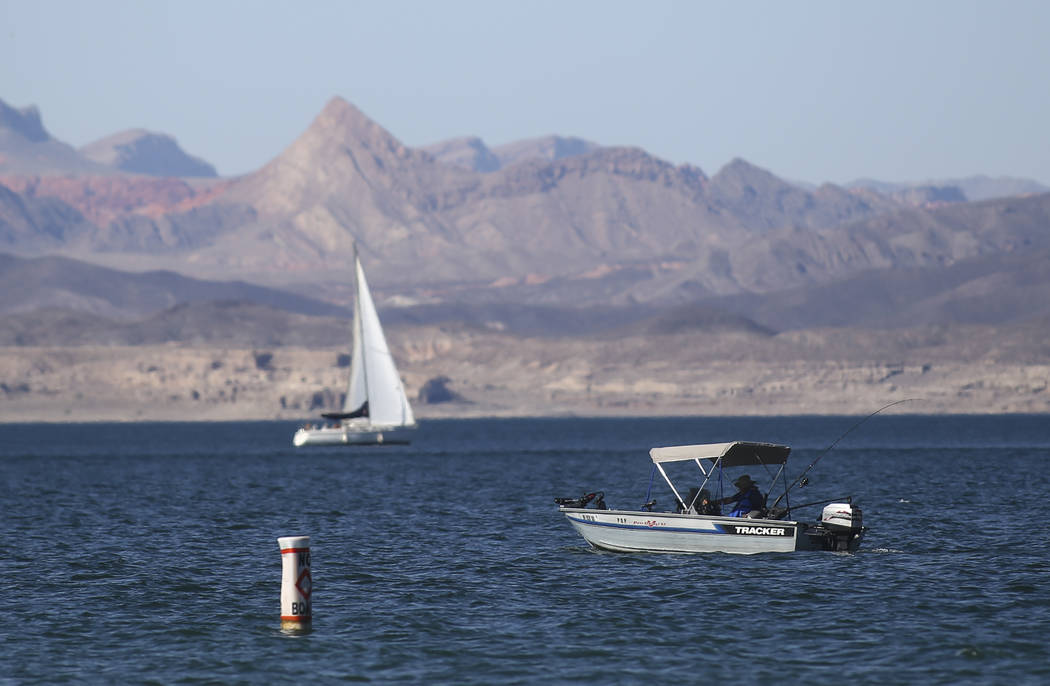 Chase Stevens Las Vegas Review-Journal A fisherman spends time on the water at Lake Mead National Recreation Area on Tuesday, Aug. 15, 2017. A recent pact with Mexico is expected to benefit Lake Mead as millions will be spent on conservation projects and voluntary water use cuts are made.

The Southern Nevada Water Authority plans to spend up to $7.5 million in Mexico over the next 10 years in exchange for more Colorado River water.

Authority board members unanimously approved the payments Aug. 17 as they gave their blessing to a sweeping water-sharing agreement the U.S. and Mexico are expected to sign next month.

The new pact, known as Minute 323 to the Mexican Water Treaty of 1944, spells out how much Mexico would have to reduce its river use during a shortage on the Colorado and how much extra water the nation would get in a surplus. It also calls for voluntary cuts in water use that would benefit Lake Mead.

Under the agreement, the authority, the U.S. Bureau of Reclamation and water agencies in Arizona and California would provide $31.5 million for water efficiency improvements in Mexico through 2026. In return, the contributing agencies would share 229,100 acre-feet of Colorado River water, which is almost enough to supply the entire Las Vegas Valley for one year.

Mexico is expected to use the money to line canals, repair pipes, curb runoff from farm fields and other water-saving projects.

Because most of the water drawn from the Colorado is used to grow crops on both sides of the border, the biggest opportunity for conservation is in the agriculture sector, water authority General Manager John Entsminger said.

“The goal is to grow the same crops with less water,” he said.

The bulk of the money will come from the Bureau of Reclamation, which is paying $16.5 million for 120,000 acre-feet of water. Of that, 70,000 acre-feet will be set aside for habitat restoration and other environmental work in the U.S. and Mexico, and the rest will be left in the river to improve its overall health.

The authority will get 27,275 acre-feet of water for its initial $3.75 million contribution.

If additional projects are identified after the first round of work in Mexico is done, the authority would chip in up to $3.75 million more in exchange for another 27,275 acre-feet of water.

One acre-foot of water will supply two average Las Vegas area homes for just over a year.

Before the board vote Aug. 17, Entsminger said the broader treaty amendment is important to both countries because it spells out what is expected of everyone if a shortage is declared on the Colorado River. Otherwise, he said, the U.S. and Mexico could find themselves in a fight over the river at the same time they’re trying to manage “a potential water crisis,” he said.

The new pact also outlines a series of voluntary water cuts Mexico has agreed to make to slow the decline of Lake Mead and stave off a first-ever federal shortage declaration.

Nevada, Arizona and California have agreed in principle to similar voluntary cuts as part of a so-called Lower Basin Drought Contingency Plan that Entsminger hopes to see finalized by the three states sometime next year.

In a separate vote Aug. 17, authority board members unanimously approved a $3.4 million payment to Arizona to store another 13,000 acre-feet of water in that state for future use in Nevada.

All told, the authority now has roughly 1.8 million acre-feet of water — enough to supply the Las Vegas Valley for eight years — banked in various accounts in the region. Entsminger said he doesn’t know of another water agency with such a sizable reserve.

Based on current growth projections, the community is not expected to need any of its banked water resources for at least the next decade.

Mexico and Arizona weren’t the only ones to get money from the Southern Nevada Water Authority.

The Colorado River itself also saw a nice windfall on Aug. 17, when the authority board approved another $2 million for an ongoing pilot program that funds conservation projects from Wyoming to the U.S.-Mexico border.

So far, the authority, the federal government and their program partners in Arizona, California and Colorado have contributed $20 million for projects credited with saving approximately 125,000 acre-feet of water.

Water authority General Manager John Entsminger said the surface of Lake Mead is about 19 feet higher today than it would be otherwise thanks to the pilot program and other collaborative conservation efforts.

“This shows that we can have a meaningful effect on the river and on reservoir conditions with these sorts of cooperative programs,” he said.