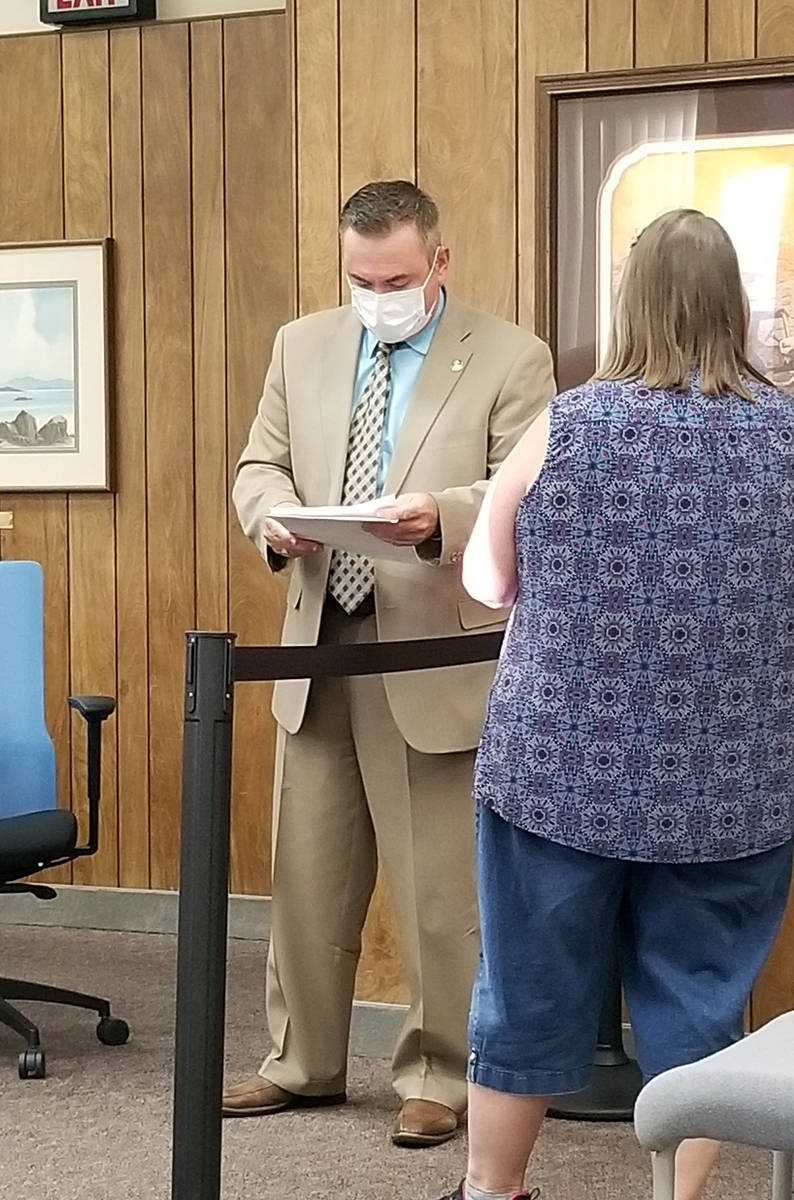 City Council was forbidden from taking any action on terms and conditions for new airport hangar leases due to a temporary restraining order issued this week by a Nevada District Court judge.

On Monday, June 22, Judge Nancy Allf issued the order, which also prohibited the city from terminating the ground leases for 28 hangars at Boulder City Municipal Airport or taking possession or control of them when the current agreement expires July 2.

Her order stopped the city from moving forward with agenda item 9 for Tuesday’s, June 23, meeting that would have allowed council to set the terms and rental rates for a new lease.

The order, which is in effect until a hearing at 11:30 a.m. Wednesday, July 1, stems from a District Court complaint filed by a group of those hangar owners.

City Attorney Steve Morris said temporary restraining orders are often given “to maintain the status quo until the judge has the opportunity to hear arguments from both sides to a dispute.”

“That opportunity will take place at a hearing on July 1, 2020, the day before lease agreement 89-85 will expire under its own terms,” he said. “The TRO (temporary restraining order) was entered without a hearing and was based solely on the baseless allegations of the hangar tenants. While the TRO may stay any action by the City Council until the hearing on July 1, 2020, the city looks forward to the opportunity to present its arguments to the court.”

When the agreement expires, terms call for the hangars to revert to city ownership.

In their complaint, the hangar owners accuse staff of lying to and withholding information from City Council members and that Morris and City Manager Al Noyola acted “arbitrarily and capriciously.”

The group’s attorney, Cami Perkins, filed a motion for injunctive relief with the temporary restraining order and in it said that staff failed to provide critical information to council that was “unquestionably necessary” to make an informed decision about the leases.

She also wrote that they misrepresented the city’s legal options regarding the ground leases to council members and did not allow items from the owners to be put on the agenda.

Perkins did not respond to a request for comment before the Boulder City Review’s deadline.

According to an email from City Clerk Lorene Krumm to Matt Ragan, who was requesting the items be put on the agenda, it was not provided the required 19 days prior to the meeting. She also said the title did not meet the requirements for the open meeting law and included enough information for several different agenda item titles.

The expiring lease is between the city and Nunno Corp. Ltd. It allowed them to build hangars and lease the land they were on. Throughout the 30-year term, Nunno recouped its costs by subleasing the land and selling interest in the hangars. At the end of the term, the city would gain the hangars as assets.

“The city is confident the court will agree that the City Council, being the legislative body with exclusive authority to set policy for the management of the city’s property, can rely on the terms and conditions of a contract negotiated 30 years ago,” Morris said.

The original temporary restraining order forbids council members from taking action on agenda item 11, which did not deal with the hangar leases. An amended order was submitted to the court and served to the city before the meeting.