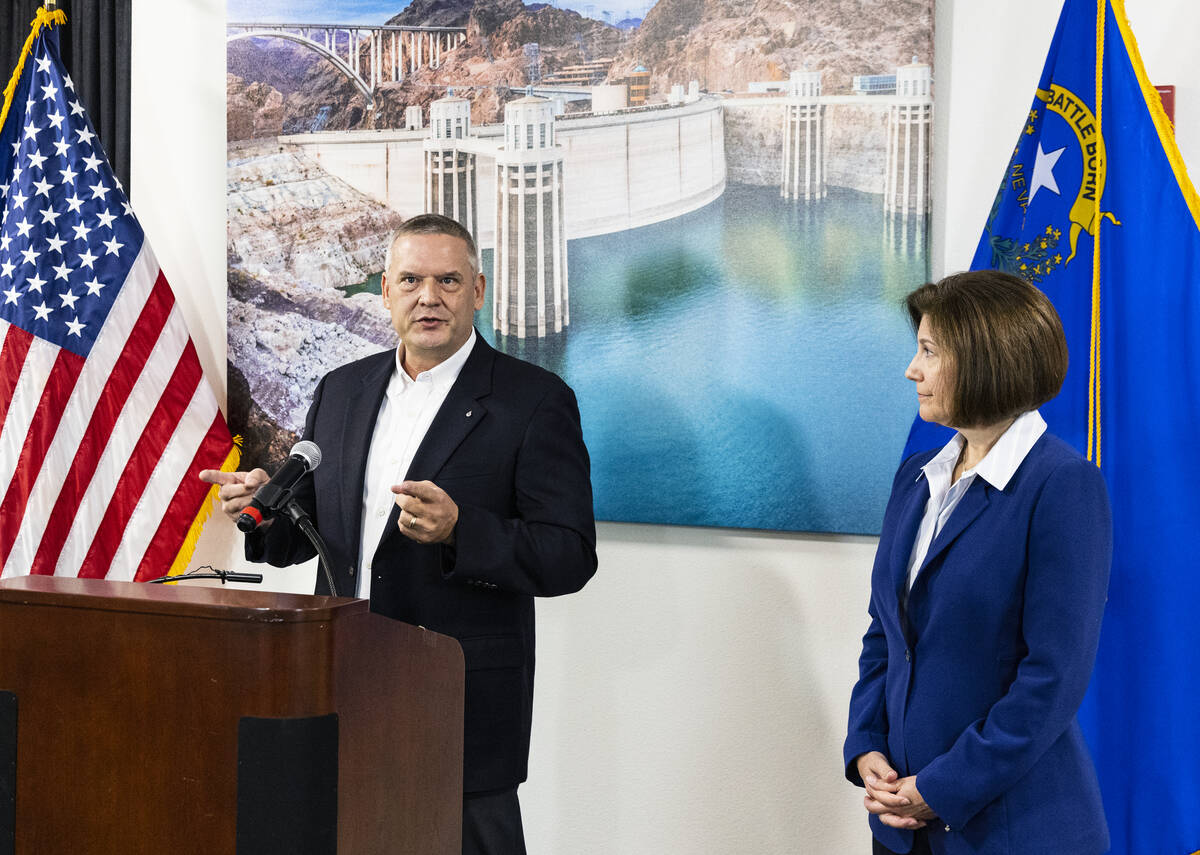 U.S. Sen. Catherine Cortez Masto said during a news conference in Las Vegas on Monday, Aug. 22, that the Biden administration must ensure that cuts, which federal officials have said are needed to protect critical infrastructure at the nation’s two largest reservoirs, are distributed fairly among the seven states that rely on water from the Colorado River. She is demanding the Department of Interior provide a detailed plan within 90 days on how the agency plans to spend $4 billion in drought relief funding that was included in the recently signed Inflation Reduction Act.

“We need a real plan. We need a real deadline. And we must use these once-in-a-generation federal resources for permanent systemic reductions in water use across the basin,” Southern Nevada Water Authority General Manager John Entsminger said during Monday’s news conference.

The call from Nevada officials comes after the Bureau of Reclamation last week muddied the waters of talks for how Western states should reduce water use along the Colorado River amid a worsening 23-year drought that has sent water levels at Lake Mead and Lake Powell to record lows not seen since the the lakes were first filled.

In June, reclamation Commissioner Camille Touton said in a U.S. Senate hearing that the states had 60 days to come up with between 2 million and 4 million acre feet in cuts to Colorado River water use — roughly 15 percent to 30 percent of the water that flows through the river annually — or risk the federal government imposing those cuts unilaterally.

That deadline came and went Aug. 16 without any such deal between the states on the table after negotiations stalled this month. Instead of announcing any of the threatened unilateral action, officials from reclamation and the Department of Interior punted. Federal officials, including Touton, said that they are now developing measures to implement the reductions if needed but said that the states have more time to negotiate voluntary cuts.

Entsminger, who is Nevada’s chief negotiator on the Colorado River, said Monday that there’s been some discussions among the states since the so called deadline and thinks they are committed to picking up those negotiations.

The Bureau of Reclamation also announced last week that Lake Mead will enter a Tier 2a shortage next year. That shortage declaration means that Nevada’s and Arizona’s Colorado River allocation will be cut by 8 percent and 21 percent, respectively. That is slightly more than the 7 percent and 18 percent in reductions the states are experiencing this year under the first federal shortage ever declared for Lake Mead.

But those incremental increases in cuts come nowhere close to the additional cuts reclamation officials say are needed next year to preserve critical levels at Lake Mead and Lake Powell and ensure that their respective dams can continue to generate hydropower and pass water downstream.

Entsminger sent a scathing letter to Interior Department officials on Aug. 15 lambasting the lack of progress in the negotiations between the states and the “unreasonable expectations of water managers,” while also calling on the federal government to take a more prominent role to address the Western water problem. The letter also laid out a dozen recommendations Entsminger said the federal government can use to reduce water consumption, many of which are programs that have been in use for as long as two decades in Southern Nevada, such as paying residents to replace turf with drought-friendly landscaping.

Cortez Masto was part of a group of Western senators who helped add the $4 billion in drought relief to the recently signed Inflation Reduction Act. Some of that money is expected to go toward paying farmers to either switch to less water-hungry crops or fallow their fields.

The senator said Monday that the Department of Interior needs to push the other states to implement water conservation measures similar to those already in place in Nevada, and wants to ensure that the funding in the new law goes toward permanent, long-term water use reductions rather than temporary measures.

Since 2000, Southern Nevada has reduced its water consumption by 26 percent while the valley’s population has grown by more than 750,000, according to the water authority.

“The distribution of funding I fought for should be contingent on those assurances and the (Department of Interior) needs to ensure all states, including the lower basin states, are engaging in comprehensive conservation actions similar to what Nevada has done and continues to do,” Cortez Masto said.