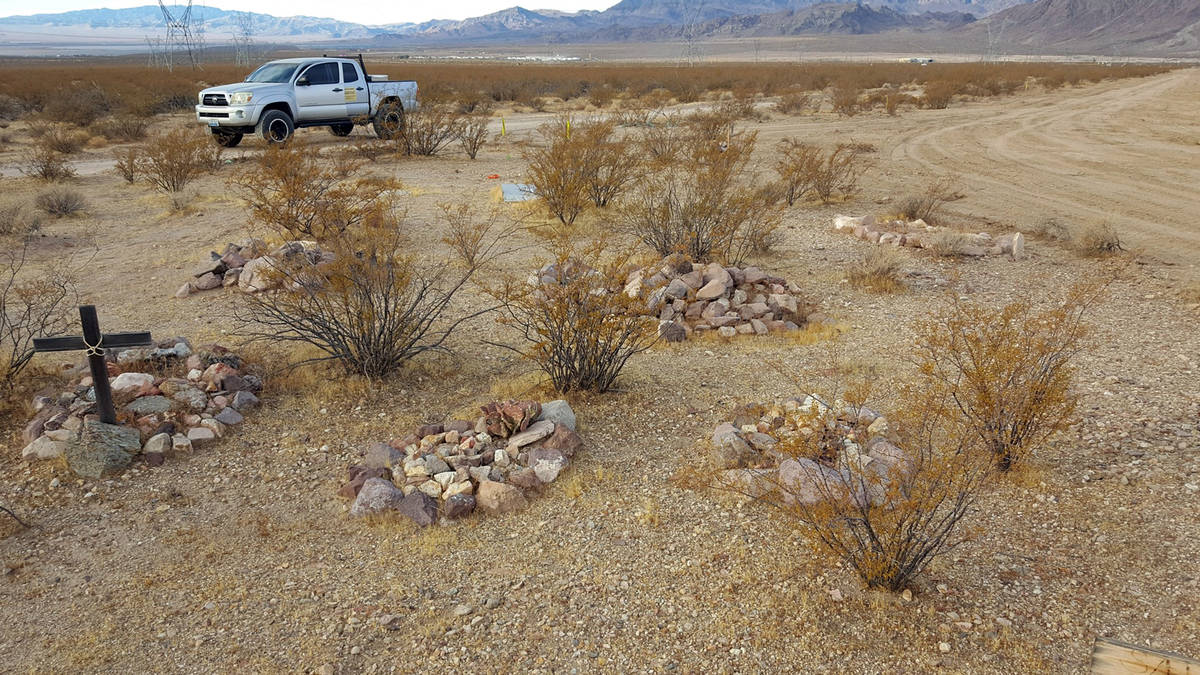 (Leroy Dodge) Rosendin Electric recently found this small pet cemetery during a site survey for its Townsite Solar project. The company is asking the people who buried animals there to relocate them by Jan. 29. 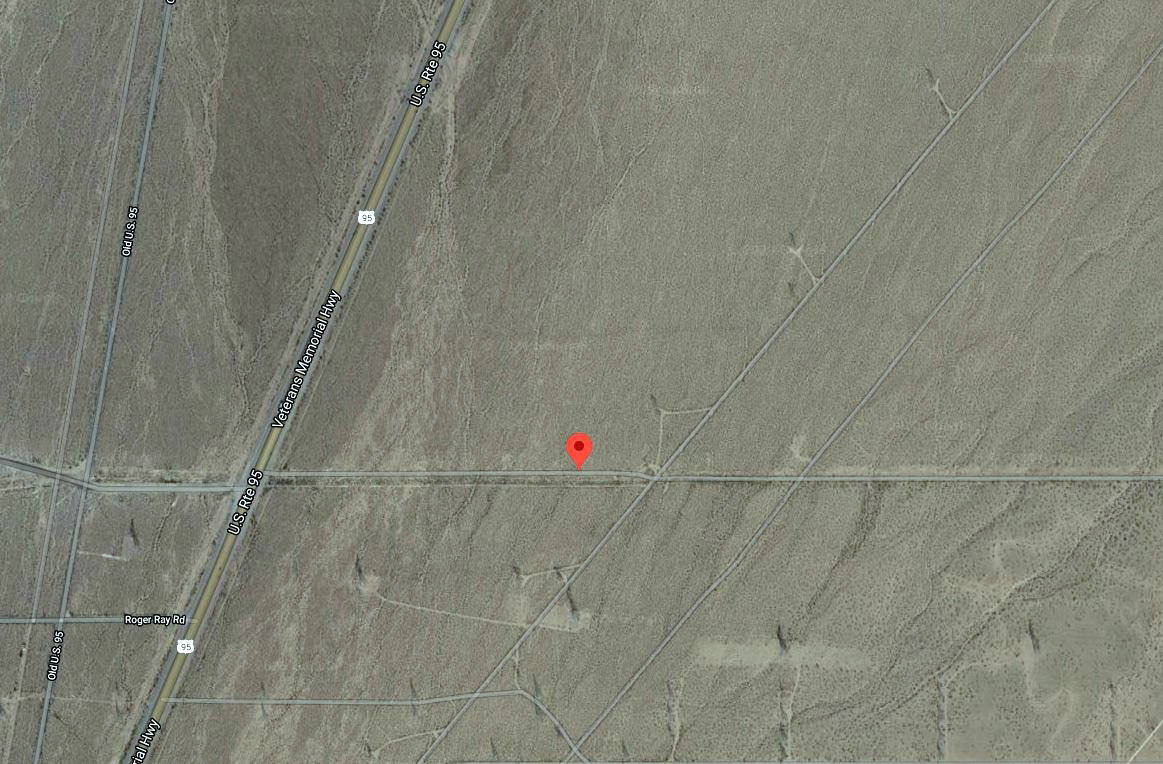 Google Maps A small pet cemetery was recently found in the desert during a site survey for the Townsite Solar project. It is not the cemetery organized by the late Boulder City resident Emory Lockette. Its coordinates are 35.935167, -114.903667. 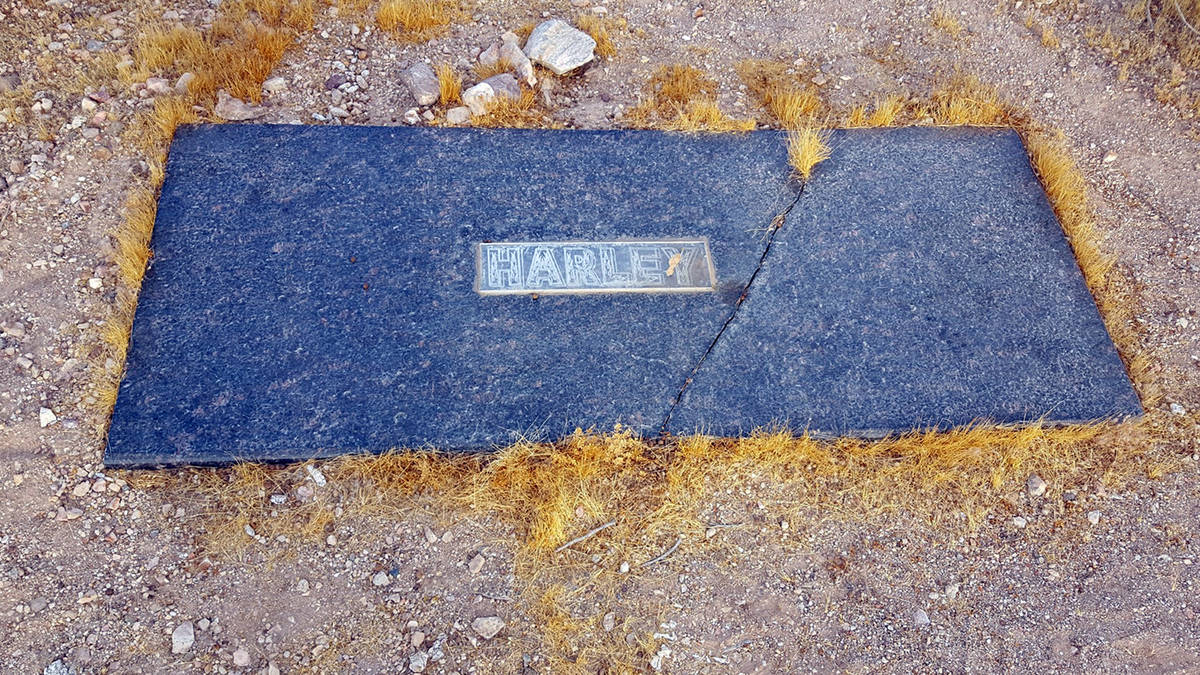 (Leroy Dodge) This animal grave is one of several found during a recent site survey for the Townsite Solar project.

Recently, Rosendin Electric announced it had found some animal graves during a site survey for the Townsite Solar project. The announcement caused some concern by locals who had pets buried at the cemetery.

“I believe it is important to emphasize that the location the company referred to is not the pet cemetery started decades ago,” said Mayor Kiernan McManus in an emailed statement. “That cemetery is within the boundary of the wildlife conservation area. While no new interments can be done there, that area is protected and cannot be disturbed.”

Townsite Solar’s project encompasses 1,032 acres of land just west and south of the Boulder City Municipal Airport. The cemetery was found at the southern perimeter fence line of the project.

“The developer of the Townsite Solar project … placed an ad on page 6 of the Boulder City Review asking the public to relocate pet graves found about a mile east of U.S. (Highway) 95, near where they plan to place a perimeter fence for the project,” said Boulder City Communications Manager Lisa LaPlante. “This location is not the pet cemetery located near Highway 95 in the Boulder City Conservation Easement that was established by Emory Lockette. That pet cemetery is located 1.4 miles south of the Townsite Solar project.”

Rosendin is asking people who buried animals in the area of the solar project to move the remains by Jan. 29 before they begin grading and installing the perimeter fence. The coordinates for the graves are 35.935167, -114.903667.

“This is a sensitive subject and we are trying to move forward in a thoughtful manner, weighing the concerns of the pet owners with the interests of the community-at-large,” wrote McManus. “With regard to the area the company referred to, I believe there are about ten markers over a fairly wide area. I have spoken briefly with Acting City Manager Michael Mays since the advertisement appeared but we have not come to a definite plan. The company invited the public to the location; the outcome of that is not yet known. I believe we will have a more definite approach well before the time the company indicated work would begin.”

The area of the Townsite Solar project has been under a lease option agreement since 2012. It was first leased to Korean Western Power Company, and three years later was transferred to Skylar Resources. About a year ago, Skylar partnered with Capital Dynamics for the project. Rosendin is the construction contractor.

In January 2019, the city approved extending the option agreement through 2022 for the project. Once the lease is exercised and assuming all acres are developed, the city will receive approximately $51.9 million in the first 30 years as well as an approximate $4 million savings in utility power purchases.