(LGA) This rendering shows the visitor center that is part of the proposed expansion of the Nevada State Railroad Museum, 601 Yucca St.

(LGA) This rendering shows the interior of the visitor that is part of the proposed expansion of the Nevada State Railroad Museum, 601 Yucca St. 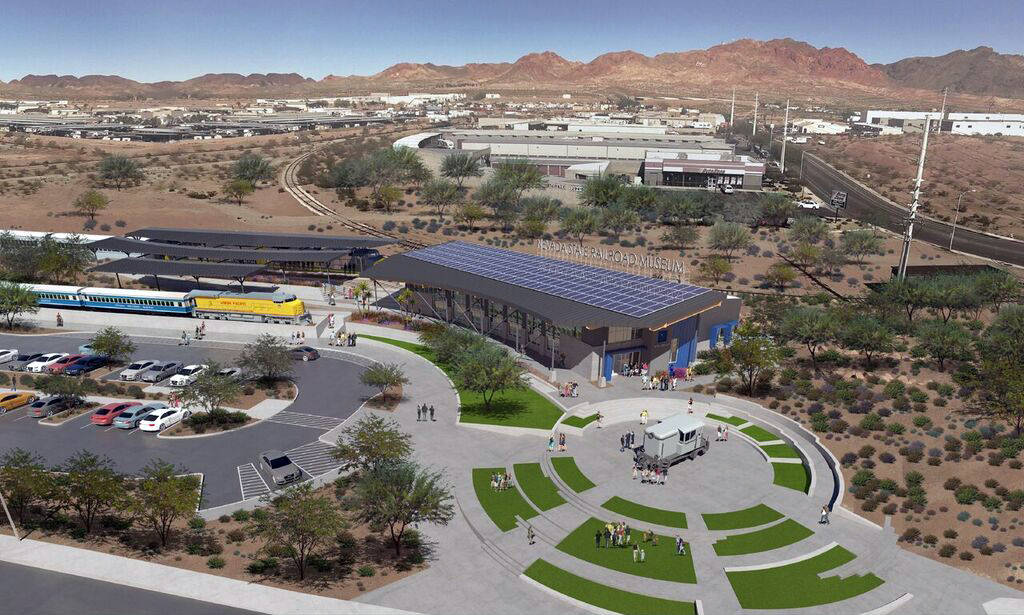 (LGA) This rendering is an aerial view of all three phases of the proposed expansion of the Nevada State Railroad Museum, 601 Yucca St.

Proposed state legislation could help pay for the expansion of the Nevada State Railroad Museum in Boulder City.

Members of city leadership including Mayor Rod Woodbury, Councilwoman Peggy Leavitt, and City Manager Al Noyola were in Carson City last week to advocate for millions in funding through one of two active bills: Assembly Bill 84 and Senate Bill 64.

“In all we met with 20 influential lawmakers from the Nevada Senate and Assembly,” Noyola said. “We were glad to see legislator support for the project and were able to answer questions from state leaders that could have an impact on the future of the project.”

The Nevada State Railroad Museum, 601 Yucca St., has proposed an expansion in three phases that will cost an estimated $35 million.

“We’re so excited about this project because it has the potential to give us the space that we’ve never had. … What has been proposed is a world-class museum” said Randy Hees, museum director.

The expansion would provide a 9,700-square-foot visitor’s center, new boarding platforms, a linear park with interactive activities for children and links to the River Mountains Loop Trail.

According to city Communications Manager Lisa LaPlante, the Nevada State Railroad Museum is the most-visited of Nevada’s seven museums with approximately 55,000 visitors a year.

The city is seeking to have either AB84 or SB64 passed to help pay for the project.

AB84 would provide for up to $200 million of state general obligation bonds to be issued throughout the state to protect, preserve and obtain the benefits of its property and natural and cultural resources. Up to $25 million of that total could be allocated for the museum’s expansion in Boulder City.

SB64 is a request to the state for $15 million for the project.

“This project aligns well with Boulder City’s recent strategic plan … where established goals include: promote historic preservation, invest in infrastructure and manage growth and development,” Woodbury said. “I’m proud of the museum staff and volunteers who promote our rich culture and history. … Expansion of this important community asset will bring more tourists to Boulder City and help support local businesses.”

LaPlante said the city hopes to hear from the state in the spring about the funds.

Also, the Boulder City Chamber of Commerce has formed a committee to raise private money for the project.

“We have been working very closely with the state for several years and feel very optimistic after the meetings last week,” said Jill Rowland-Lagan, CEO of the chamber. “State investment here strengthens other nearby tourist attractions and businesses. This project would be a win for the entire region.”

In June, the city was awarded a $350,000 grant from the National Park Service’s Land and Water Conservation Fund to help fund the amenities for the linear park.