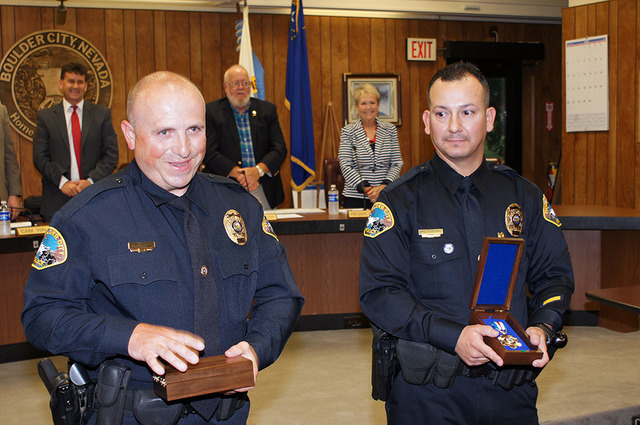 Two Boulder City Police officers were awarded one of the highest honors in law enforcement at a City Council meeting on Tuesday. Officers Alan Nutzman and Armando Salazar each received the Medal of Valor from the Boulder City Police Department for bravery in the line of duty.

Nutzman and Salazar were honored for their bravery stemming from an incident on March 29, 2015, when they responded to a shots fired call on Avenue A. When Nutzman and Salazar encountered the man standing outside his apartment and ordered him to show his hands, the man ran into his apartment to grab his weapon. A fire fight ensued and both officers fired their weapons, with Nutzmans shot fatally wounding the suspect.

The two officers humbly accepted their awards in a packed council chamber full of police officers and citizens happy to honor them.

I just want to thank you all so much, Nutzman said. It means so much that all of you came to support us.

Sgt. John Glenn congratulated the men for their service and recapped the dangerous night that gave the men their commendations.

Tonight, these two officers have brought honor to themselves, their families, the city and the police department, Glenn said. Their quick thinking and teamwork saved the residents of the apartment from an even more horrific fate.

Boulder City Police Chief Timothy Shea said the two officers use of their training was a commendable feat that kept them alive to receive such a prestigious award.

Many times when an officer receives an award like this they are not around to accept it, Shea said. Thankfully, both these officers are here today because of their incredible use of intelligence and tactics.

Mayor Rod Woodbury thanked the officers and the rest of the police department for their courage and their professionalism.

I was briefed on this incident a couple of months ago and I heard nothing but glowing reports, Woodbury said. I want to thank all of the police department for what they do on a day-to-day basis. We sometimes look at training as something we just go through the motions with, but when our policemen and firefighters actually put it in action we see how much they are needed.

City Manager David Fraser said the city could not function without the service and bravery of the citys men and women in uniform.

It was great to give officers Nutzman and Salazar awards that I hope they will never again be in a position to receive, Fraser said. I think we tend to forget that our emergency services are the people who run into a dangerous situation while everyone else is running out.

Director of Community Development Brok Armantrout said that VC3 will be responsible for creating a cloud storage system as well as an internet-based disaster backup system.

With the cloud system our law enforcement officers can easily look up city data and, heaven forbid, if something horrible were to happen to city hall we would be able to use the disaster data backup to help us get up and running within the next day.

A cloud-based system stores information almost exclusively on the internet by secure servers.

VC3 currently has a contract with the city for $223,000 per year to maintain and operate the city servers. The creation of a new cloud-based system will cost the city an extra $20,000 per year, a price that Armantrout said was well worth it.

According to Councilwoman Peggy Leavitt, when she first was elected to City Council poor internet was a constant complaint for staff and since the city partnered with VC3 the city has received zero complaints.