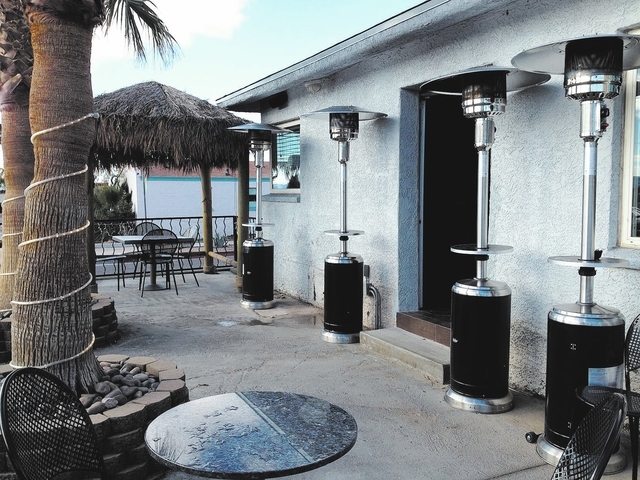 Surf’s up on Nevada Way with a brand-new tiki-themed bar and restaurant.

The tiki decor is minimal, with only some bamboo on a wall and a tiki head on the exterior sign. And some flamenco art adorning a wall does not exactly fit in the tiki theme.

Franky’s plans to offer specialty tropical drinks, as well as a menu with hot dogs and panini sandwiches, but at this stage the menus are being developed. Only hot dogs and traditional drinks are available.

Owner/manager Justin Caruso admits the establishment is still a work-in-progress.

“There’s still a lot of things that aren’t in place to make it a finished product,” he said.

However, a few customers Monday afternoon didn’t seem to mind what was left to the imagination.

One customer, Andreas Romines, said the décor was “really good.”

Franky’s also is a smoke-free establishment, but smoking is allowed on the heated patio.

“There’s a definite draw in the community for people who don’t want to smoke in a restaurant lounge,” Caruso said.

Caruso said he and brother Marcus Caruso opened the establishment in an effort to create a tourist destination in Boulder City.

“The idea was to make tourists want to come here and stay several days in Boulder City,” he said.

It helps that Justin and Marcus Caruso own the Oasis Boutique Motel, to which Franky’s is attached.

“We’re trying to create a little place for tourists that like a little better accommodations and service,” he said.

Although the Travelers Mojave Motel offered weekly rates and catered to low-income local residents, since opening as the Oasis, 80 percent of the guests are European, according to Justin Caruso.

Justin Caruso said it will be important to be a tourist destination once the Interstate 11 bypass is constructed, rerouting traffic around Boulder City.

“This new bypass is probably going to make it harder for tourism,” he said.

But whatever the effect of I-11, which is expected to be completed in 2017, Justin Caruso is optimistic that his new business will thrive.

“You gotta adapt to those things,” he said.

Franky’s Tiki Food and Drink is not associated with the popular Frankie’s Tiki Room tiki bar in Las Vegas, which Justin Caruso said he only learned of recently.

Franky, he said, is his father’s nickname.

“I can’t change my dad’s nickname,” he said.

A grand opening will be held later, Justin Caruso said.