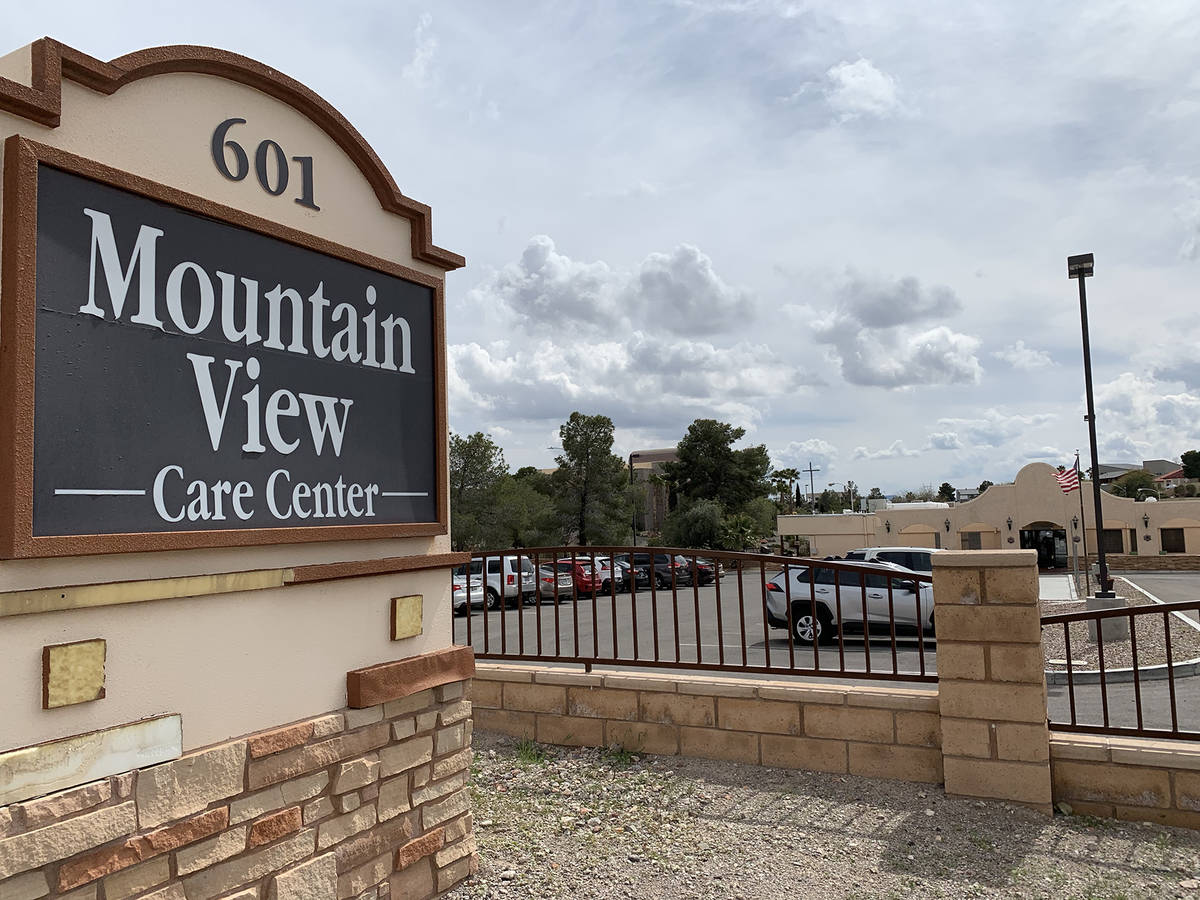 (Hali Bernstein Saylor/Boulder City Review) Federal regulators for Medicare and Medicaid rated Mountain View Care Center in Boulder City as “below average” and the facility was cited in November for failing to disinfect shower chairs and shower beds. Since then, the facility has been reinspected three times and received no additional citations.

More than 80 percent of Nevada’s nursing homes have failed to meet federal standards for infection prevention and control in the past three years, according to Medicare data.

Records show 90-plus citations ranging from employees failing to wash their hands and don proper protective equipment to entire facilities operating with out-of-date or incomplete infection prevention and control programs, all recorded during health inspections.

While the data indicate nearly all the problems have been corrected, the cited shortcomings underline potential weaknesses in keeping the novel coronavirus from spreading in facilities housing some of Nevada’s most vulnerable residents. The data show the state’s Medicaid- and Medicare-certified nursing homes have a total of more than 7,000 certified beds for patients.

Gov. Steve Sisolak on March 12 announced new safety protocols for the facilities, including visitation limits and health screenings prior to entry. In Nevada, 55 cases of COVID-19 had been identified as of Tuesday afternoon; one has resulted in death.

COVID-19, a respiratory illness caused by the novel coronavirus, had killed 25 people at one Seattle-area nursing home and infected 47 of the facility’s employees as of Friday night. At least 10 long-term care facilities in the Seattle area have reported positive cases.

“It is not lost on me that some of these restrictions are not ideal for residents and family members, but they are critical to ensure older and medically vulnerable Nevadans remain safe,” Sisolak said.

Several local facilities have elected to adopt even more stringent precautions. On March 12, Mountain View Care Center in Boulder City stopped allowing visitors at its facility and is screening employees for COVID-19 symptoms before they are allowed in the building each day.

“Protecting the veterans in our care is our top priority, but we also recognize the importance of family and friends.” Virtual visits “help strike a balance between quality of care and quality of life,” said Kat Miller, director of the Nevada Department of Veterans Services.

Residents have access to devices programmed with video messaging software, and families can call to check on their welfare throughout the day.

The Centers for Medicare & Medicaid Services, which oversees the nation’s nursing homes, this month directed inspectors to focus “exclusively on issues related to infection control and other serious health and safety threats, like allegations of abuse.”

Medicare data show 55 of Nevada’s 66 federally certified nursing homes were cited at least once for deficiencies related to infection prevention and control between 2017 and 2019. More than half of the facilities were located in the Las Vegas Valley.

“Infectious diseases are a serious risk in nursing homes,” said Brian Labus, an assistant professor of epidemiology at UNLV. “They can spread quickly and potentially kill a lot of people because it’s a particularly vulnerable population.”

In March 2018, an inspection found the Delmar Gardens of Green Valley nursing home in Henderson was not tracking cases of communicable diseases and infections within its facility. The same facility, which Medicare has rated “much below average,” was also cited in 2017 after a nurse prepared a resident’s medication without wearing gloves.

Mountain View was cited last November for failing to disinfect shower chairs and shower beds after residents used them. An inspector noted feces and urine stains on the equipment. Regulators have rated the facility “below average.”

Hansen said her staff now deep cleans shower chairs twice a day, and certified nursing assistants keep a log to ensure the equipment is clean whenever they finish using it. She said Mountain View has been inspected three more times since November and has received no additional citations related to infection control.

In Reno last October, inspectors found a patient with a drug-resistant infection was allowed to eat in the dining room of Sierra Ridge Health and Wellness Suites, despite infection control policy dictating he should have been isolated in his room. Medicare has placed the facility in a program for nursing homes with a history of serious quality issues.

TLC Care Center in Henderson was cited four times, including for multiple occasions of a nurse failing to wash their hands while changing a patient’s dressings and multiple occasions of a nurse not wearing protective gear inside the room of an isolated patient. Despite having the most infection control-related citations among Nevada nursing homes, the facility was rated “average” by Medicare.

The data indicate all the problems at the facilities were fixed. Delmar Gardens of Green Valley and Sierra Ridge Health and Wellness Suites did not return a request for comment March 12. TLC Care Center administrator Dan Hills declined to comment Friday morning.

‘Not business as usual’

Labus said it is critical that nursing homes correct any shortcomings in infection prevention and control before a disease like COVID-19 has a chance to proliferate. People over 60 and those living with severe chronic illness are more likely to become severely ill, according to the Centers for Disease Control and Prevention.

“At this point it’s not business as usual. You have to go above and beyond with your infection control protections,” he said. “So if a facility is not meeting its day-to-day routine obligations for infection prevention, we’re obviously concerned they won’t meet these enhanced things we’re doing for coronavirus.”

COVID-19 has led multiple states, including Nevada, to adopt new precautions at nursing homes during the outbreak. The Department of Veterans Affairs announced a no-visitors rule at more than 130 of its nursing homes nationwide.

While declaring a state of emergency, Sisolak announced that long-term nursing homes and similar facilities must limit visitors to two “essential individuals” per resident at a time. Prior to entry, visitors will be screened for symptoms of COVID-19 and to identify if they have traveled to any high-risk areas recently. Nursing homes must also limit their community outings, Sisolak said.

According to data from the CDC, roughly 5 million Americans are admitted to or reside in long-term care facilities such as nursing homes, skilled nursing facilities and assisted living facilities. There are between 1 million and 3 million serious infections in these facilities every year, resulting in as many as 380,000 annual deaths.

Contact Michael Scott Davidson at sdavidson@reviewjournal.com or 702-477-3861. Davidson is a member of the Review-Journal’s investigative team, focusing on reporting that holds leaders and agencies accountable and exposes wrongdoing. Follow @davidsonlvrj on Twitter.