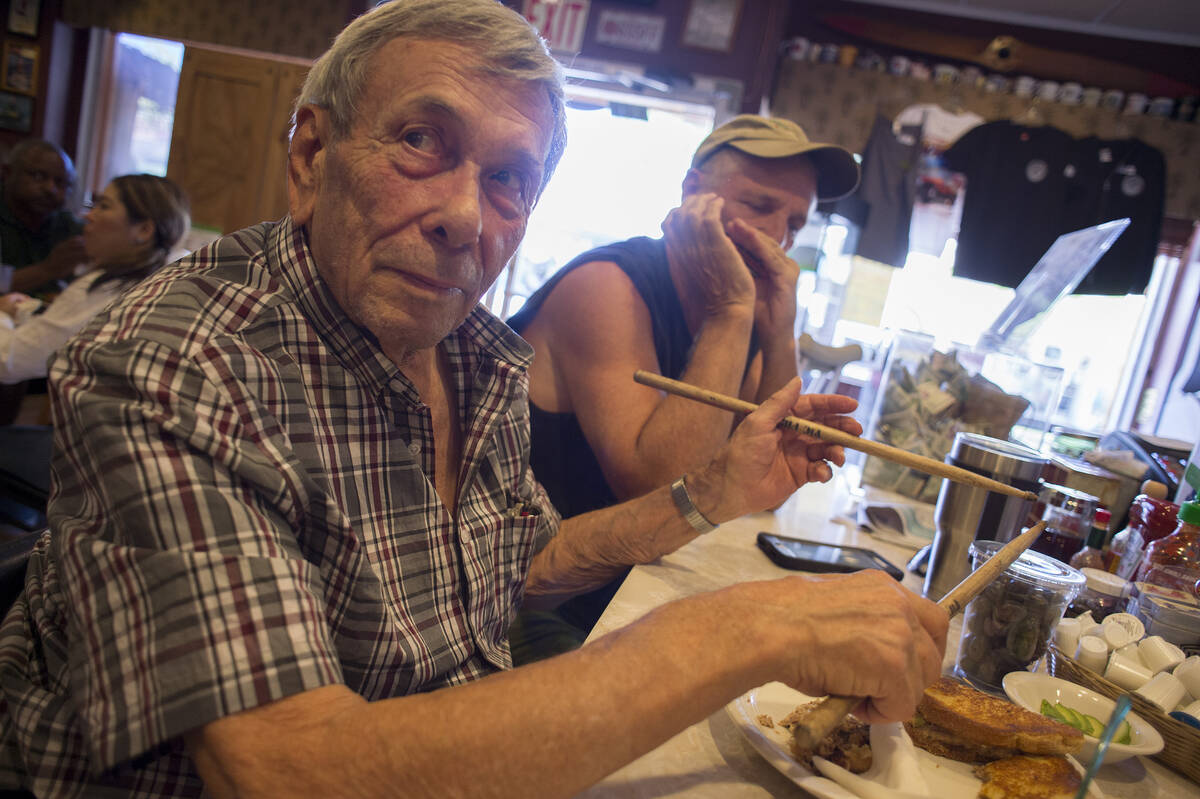 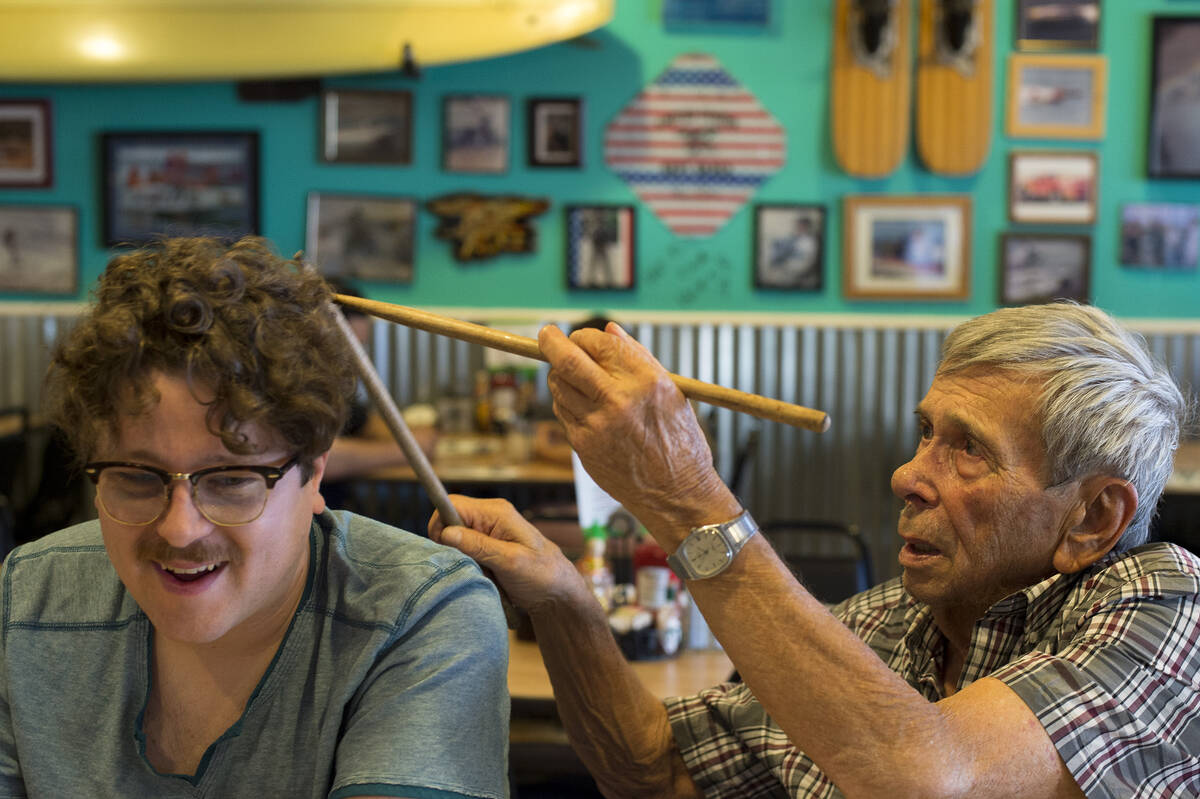 Sander “Sandy” Nelson, who was well-known for his talents as a drummer and as a staple of downtown Boulder City, died Monday evening.

Nelson, 83, had been ill for several months before his death.

He attended high school with many who had long careers in the music industry including Phil Spector, Jan Berry and Dean Torrance.

His son, Josh Straume, said he had been put into hospice care Jan. 24 after suffering a stroke.

Straume said the next day his dad suffered a ministroke that caused expressive aphasia, leaving him unable to talk.

“I’m really thankful for that conversation. … Boulder City’s going to be lacking something, just him being who he was,” he said.

Nelson’s daughter, Lisa Nelson, said she is going to miss her father saying she would “always be his ‘Loo Loo’ girl.

“That’s what I called cats when I was little,” she said.

She also said she’d miss his unconditional love for her and how he always reminded her to not forget about the “gratitudules” in life.

“He never expected anything from me and loved me so much. … I’m going to do my best to live my life the way he did —enjoy every day,” she said. “One thing he would revolve his day around was watching the sunset. Every sunset I see now, I will think of how he lived for those sunsets.”

At the age of 20, Sandy Nelson’s first record, “Geronimo” with the Renegades, was chosen to be on the soundtrack of American-International Pictures’ teen exploitation movie “Ghost of Dragstrip Hollow,” according to IMDb.

From there, he became a highly versatile and in-demand drummer as a session musician.

He also played on “To Know Him Is to Love Him” by the Teddy Bears with Spector and “Alley-Oop” by the Hollywood Argyles.

In the late 1950s and early 1960s, Sandy Nelson became known for his instrumental hits including “Teen Beat,” “Drums Are My Beat” and “Let There Be Drums,” which rose to near the top of the charts.

In 1963, his right leg was severely damaged in a motorcycle accident, which led to it being amputated, but he didn’t let that slow him down.

He moved to Boulder City in 1988 and was known as a regular in the community and usually seen hanging out at the World Famous Coffee Cup Cafe.

“He was a great man,” said Terry Stevens, co-owner of the Coffee Cup. “He will be missed at the Cup.”

Stevens said he is going to miss Nelson’s stories and seeing him sitting at the bar and chatting with the other customers as well as the staff.

Musician, councilman and Boulder City resident James Howard Adams said he will remember Sandy Nelson for the stories and jokes he told.

“Sandy was truly one of a kind,” he said. “As a legendary drummer, many people will likely remember him for his pioneering sound and unique musical style, but I will best remember him for his stories and his jokes. Sandy’s tales revealed a side of stardom and the Hollywood music scene that no one else dared share, and would leave you doubled over in laughter. We will all miss Sandy, but his music and stories will live with us forever.”

In 2015, Sandy Nelson was the guest of honor at a special event that featured his drumming and storytelling.

“They wanted it to be Sandy Nelson Day, but I thought that was a little grandiose,” he told the Boulder City Review before the event. “Now it’s just drums and stories with me.

“I tell stories all the time, every day. I just want to have a good time,” he said. “I just hope everyone else does too.”

In 2019, the community rallied behind Sandy Nelson to help him rebuild his home, which was also “born” in 1938, after it was damaged in a fire. In addition to repairing that damage, the home’s entire electrical system had to be repaired to make the house livable.

To help cover costs and expenses for living in a hotel while the repairs were made, a donation jar was placed at the Coffee Cup, a benefit concert was held and a GoFundMe page was created.

“It’s amazing. I’m overwhelmed and thankful, of course,” he said at the time. “It makes me feel warm and fuzzy.”

Nelson’s influence reached far beyond those he met.

Janelle Frese of La Palma, California, said she was introduced to Nelson’s work when she was 7 years old and just learning to play drums. She called him her “muse and drum hero.”

“My drum teacher, the late great Ed Slauson, actually rewarded me by giving me a 45 record of “Let There Be Drums” by Sandy Nelson! I was 7! That was my introduction to Sandy Nelson. … I still have that record and I can still drive that beat!”

Frese, 54, a high school English teacher for more than 30 years, still plays drums and percussion, but mostly for fun and “as a side gig.”

“I always placed a picture of Sandy Nelson on my vision board as a power symbol to attract more drums, more time to play my drums, more music, more gigs, more creativity into my life,” she wrote in an exclusive email to the Boulder City Review.

She said he will live forever “in the hearts of the drummers inspired by his musical magic. There is no one like him. Let There Be Drums in Heaven, Sandy.”

Nelson is survived by his son and daughter.

Services have yet to be scheduled.

“We will be having a big party for him,” said Lisa Nelson. “I do not have a date yet, but it is in the works.”