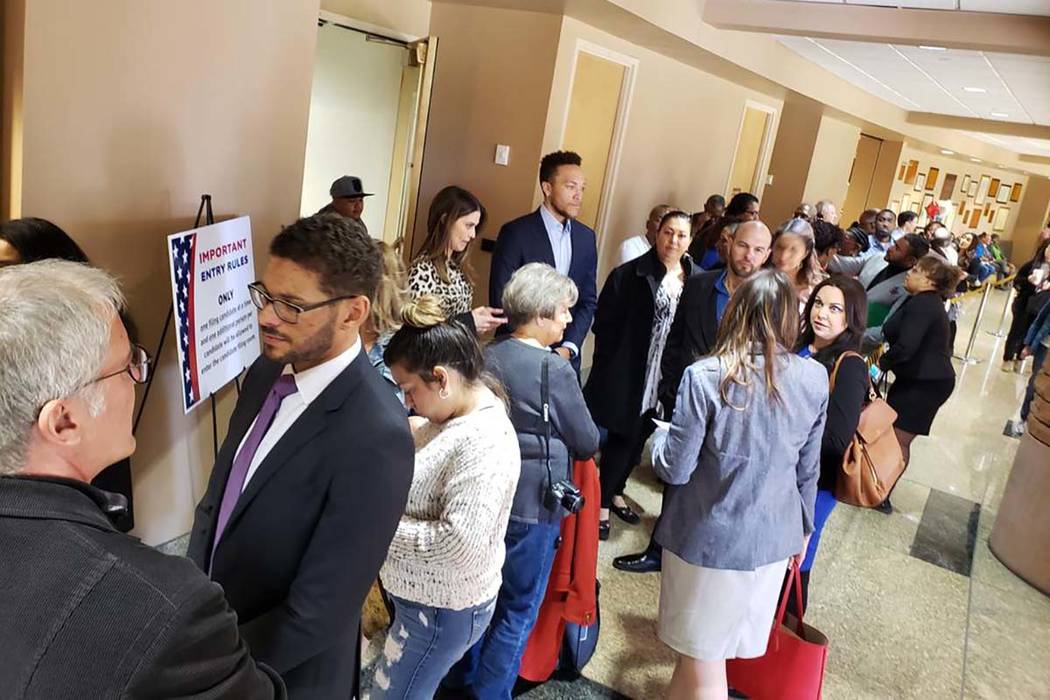 Boulder City resident Glen Leavitt has filed for re-election to serve in the state Assembly representing District 23. Leavitt, a Republican, was first elected in 2018.

He is being challenged by Democrat Brent Foutz of Boulder City, who ran for City Council in 2019 and came in last place in the primary with 1.47 percent of the vote. In December 2018, he was arrested for unlawful trespassing and resisting a public officer, and later found guilty. He was fined $500 for each charge and sentenced to seven days in jail.

Rep. Susie Lee is up for re-election for the 3rd Congressional District seat. She is being challenged by Democrat Dennis Sullivan of Henderson for the two-year term, Republican Melinda Robinson of Las Vegas and Gary Crispin of Las Vegas, who has no political party affiliation.

In the race to represent District A on the Clark County School District, Henderson residents Amanda Kelly and Jshauntae Marshall have filed for election. It is a four-year term.

Monday was the first day of a 10-day filing period to officially declare their intentions to run for some 70 local and statewide offices, including Congress, state Legislature, county commission, the board of regents and the Clark County School District. The primary will be held June 9.

A hearing for the driver involved in a fatal crash on Boulder City Parkway in March 2019 has been continued until the end of the month.

Joshua Buckingham was charged with the felony charges of second-degree murder and reckless driving after the sedan he was driving struck a pickup March 7, 2019, killing its driver, Randy Reiner, 58, of Las Vegas.

At a Tuesday, March 3, hearing to determine trial readiness in Nevada’s Eighth District Court, attorney Michael Giles with the Clark County district attorney’s office and Buckingham’s attorney, Adam Solinger, requested the hearing be continued. According to Judge David Barker, the request was made because new amended terms needed to be discussed in order for Solinger to continue representing Buckingham.

Giles also said he had given Solinger two DVDs of files about the case and a report from the computer of the car driven by Buckingham.

Barker continued the matter until March 31. Buckingham’s trial is set for July 6 with a calendar call hearing July 2.

According to the indictment, Buckingham was traveling 90 miles an hour more than the speed limit in a residential area between 7-7:30 a.m. on a school day.

Due to a technical issue, the Boulder City Police and Fire departments have a new nonemergency phone number for people to use.

According to Communications Manager Lisa LaPlante, the phone system failed during a planned power outage while it was being upgraded.

“The failure occurred coincidentally at the same time we are replacing Century Link with Cox systems,” she said. “Several lines, including police and fire nonemergency, court, parks and recreation, golf courses and the animal shelter have been operating intermittently. Outbound calls work, but inbound calls may or may not work.”

“This stop gap is in place until we get our Cox system in place at all locations,” she said.

Some of the new systems are expected to go live in seven to 10 days. Updates about the phones will be available at the city’s website, http://www.bcnv.org.