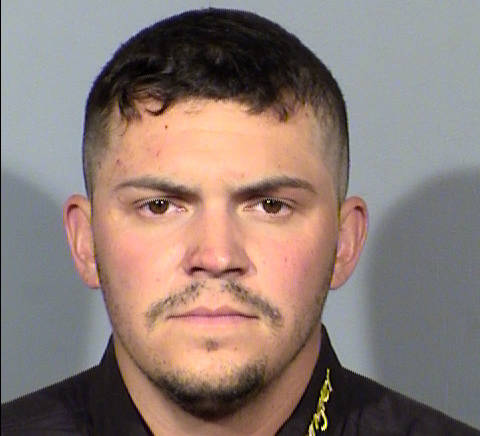 Joshua Buckingham, 27, has pleaded not guilty to one count of reckless driving with death or substantial bodily harm to other person following the fatal accident March 7 on Boulder City Parkway. An amended complaint has been filed against Buckingham, charging him with second degree murder with deadly weapon enhancement.

The driver involved in a fatal crash on Boulder City Parkway in March is now facing a second-degree murder charge.

On Tuesday, June 11, Joshua Buckingham, 27, was scheduled for a status check in Boulder City Justice Court. He had been charged with and pleaded not guilty to one count of reckless driving with death or substantial bodily harm to other person in March.

Attorney Michael Giles with the Clark County district attorney’s office said he filed an amended complaint against Buckingham, charging him with second-degree murder with a deadly weapon as well as the reckless driving. Both charges are felonies.

Buckingham’s defense attorneys were not present at the hearing. Giles said they told him they were stuck in Tonopah and were requesting a preliminary hearing for the case be set for 1 p.m. Oct. 1. Boulder City Justice of the Peace Victor Miller approved the request.

Witnesses said Buckingham was traveling at more than 100 mph and was making frequent lane changes before the March 7 crash, which killed a 58-year-old Henderson man.

The bill provides $217.5 million in bonding authority for projects across Nevada, including expansion of the Nevada State Railroad Museum in Boulder City.

“I’m excited about the opportunity to share Boulder City’s evolution from the hungry, hardworking 31ers who built Hoover Dam to the leader in green energy that we’ve become today,” Mayor Rod Woodbury said. “I want to personally thank our diligent management team and lobbyists, as well as Sen. Joe Hardy and Assemblyman Glen Leavitt, for getting behind the vision, … to secure this hard-fought funding.”

Funds from the bonds would be used for phases one and two of the three-phase, $35 million railroad museum project.

“Helen Keller once said, ‘Alone we can do so little; together we can do so much.’ I have never had that mean as much to me as with the accomplishment of seeing AB84 signed by Gov. Sisolak,” said Jill Rowland-Lagan, CEO of Boulder City Chamber of Commerce. “Finally knowing we will have the necessary funding to break ground on this majestic project is phenomenal — a huge win for the entire community of Boulder City.”

Voters originally approved the bond in 2001. The reauthorization will not affect Nevada’s general fund.

An excessive heat warning for the area has been extended through 8 p.m. today, June 13, by the National Weather Service.

The weather service is forecasting temperatures to reach 105 to 110 degrees in Boulder City and the Las Vegas Valley and 110 to 115 degrees in Lake Mead National Recreation Area, the hottest they have been so far this year.

Due to cooler than normal temperatures in May and lack of time to acclimate, people may be more vulnerable to heat-related illnesses such as heat exhaustion and heat stroke.

The weather service recommends those spending time outdoors to schedule strenuous activities for the early morning or evening, wear lightweight and loose-fitting clothing and drink plenty of water.

Young children and pets should never be left unattended in vehicles under any circumstances, as car interiors can reach lethal temperatures in a matter of minutes.

Entries for the city’s 71st annual Damboree parade are being sought, with a $50 incentive offered to those who submit their applications early.

Entries postmarked June 23 or earlier will cost $25. After that, the price goes to $75.

The parade, scheduled for July 4, will start at 9 a.m. at the intersection of Colorado Street and Nevada Way. It will continue down Nevada Way to Fifth Street and on Fifth Street to Avenue B. The parade will end at Avenue B and Sixth Street in Broadbent Park.

The theme for this year’s parade is “I♥BC.” Entries will be judged on the best portrayal of the theme, appearance and originality. Trophies to the winning entries will be awarded at 11 a.m. in the park.

Entrants can start lining up as early as 8 a.m.

For more information, call 702-293-9256 or email Damboree@bcnv.org. Parade applications are available for download by clicking the link on the city’s homepage at http://www.bcnv.org.