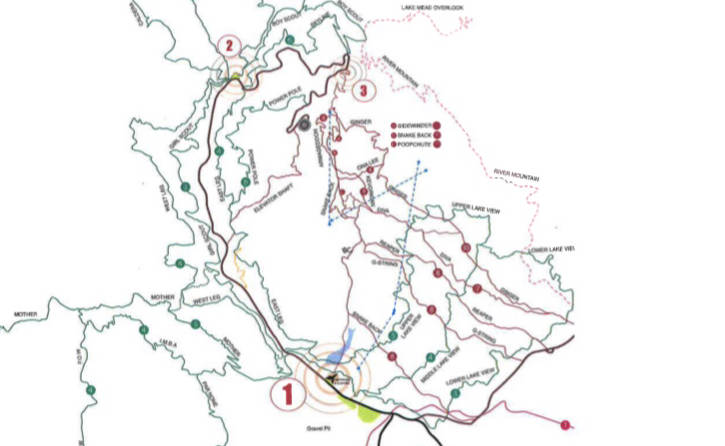 (Boulder City) This map of the trails in Bootleg Canyon shows where there have been mountain lion sightings.

Boulder City has received several reports of a mountain lion being spotted at Bootleg Canyon during the past weekend. Individuals reported the animal almost stalking and making an unusual noise thought to be threatening or ravenous. All sightings were in the location of the Mother Trail.

Those who see a mountain lion are asked to report any sightings to the city’s Parks and Recreation Department at 702-293-9256.

Communications Manager Lisa LaPlante said tracks have been found in the past but never a report of an actual sighting until now.

According to www.mountainlion.org/portalprotectencounters.asp, if someone sees a mountain lion, maintain eye contact. Do not run past or away from a mountain lion and do not bend over or crouch down. Aggressively wave your arms, throw stones or branches and do not turn away.

Hunt was appealing Judge Margaret Whittaker’s August ruling that found him guilty of failure to yield to a pedestrian in a crosswalk, impeding the ability of a driver to yield, obstructing a police officer and resisting a public officer. She sentenced him to 140 hours of community service.

The case stemmed from his June 8, 2016, arrest after repeatedly walking back and forth in a marked crosswalk to protest a police-sanctioned enforcement event. The city dropped the charges in late June 2016 but refiled them June 5, 2017.

In October, Scotti said the city’s prosecution of Hunt was retaliatory because it had dropped the original two charges and then refiled them along with three others after Hunt’s attorney filed a civil complaint accusing Boulder City and Police Sgt. John Glenn of false arrest, as well as accusing Glenn of violating Hunt’s free speech and due process, violating his Fourth and 14th Amendment rights against search and seizure and using excessive force.

In addition to ruling the city vindictively prosecuted Hunt, Scotti dismissed the case.

The city attempted to have Scotti removed from the case because it said he did not follow the correct procedure when issuing his opinion. Judge Linda Marie Bell denied that motion in December.

Boulder City Chamber of Commerce will hold its quarterly community cleanup day from 9-11 a.m. Saturday, Jan. 19. Participants will meet in the parking lot in front of Medolac at the corner of Buchanan Boulevard and Boulder City Parkway.

The group will head west along the parkway to Veterans Memorial Drive, cleaning up trash and debris as they go.

Participants should bring gloves as well as shovels and rakes.

January is National Radon Action Month, and through Feb. 28, the University of Nevada Cooperative Extension’s radon education program is offering test kits and free presentations to teach about the dangers of radon.

Radon is a naturally occurring, radioactive gas that is colorless, odorless and tasteless. It comes from the ground and can accumulate in homes, raising the risk of lung cancer.

In Nevada, 1 in 4 homes tested shows radon concentrations at or above the EPA action level.

A simple three-day test can determine if a house has a radon problem, and winter is an ideal time to test a home. If radon problems are found, they can be fixed.

Radon test kits are available at Cooperative Extension offices and partnering locations, as well as at presentations.

A presentation is scheduled for noon Feb. 4 at the Senior Center of Boulder City, 813 Arizona St.