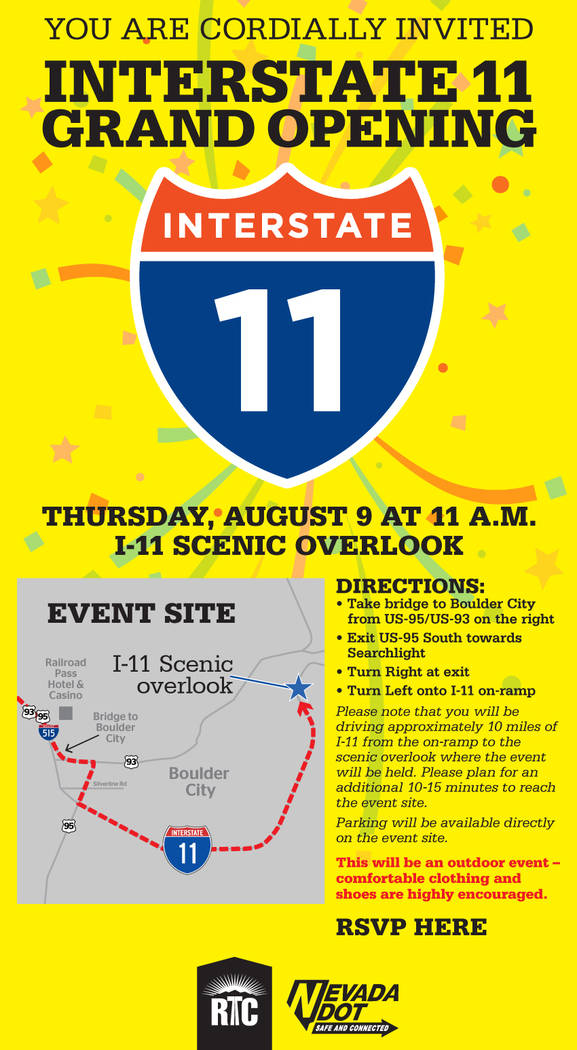 The Regional Transportation Commission of Southern Nevada and Nevada Department of Transportation will host an event at 11 a.m. today, Aug. 9, to mark the opening of a 15-mile stretch Interstate 11. 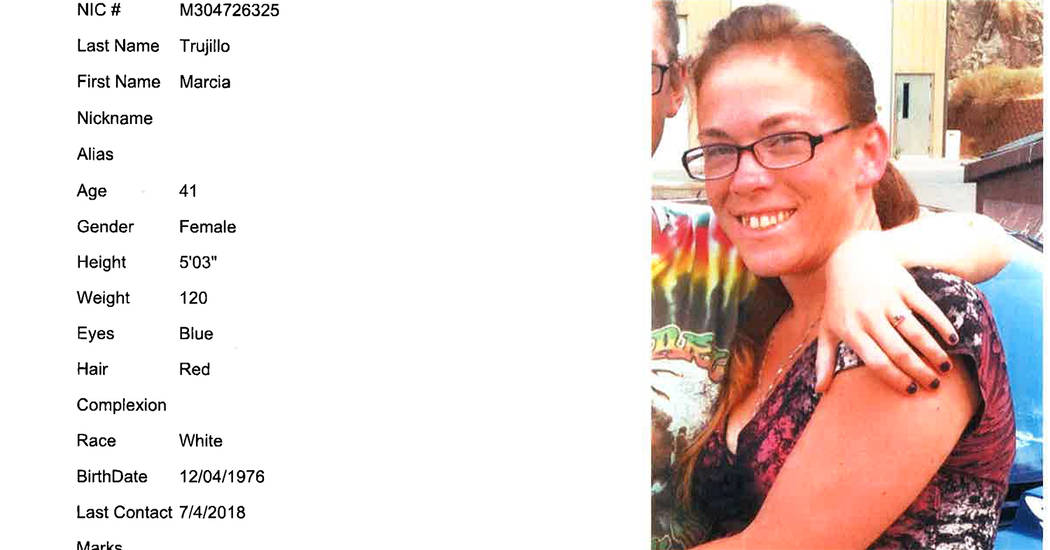 Dignitaries set to help open I-11

Numerous federal, state and local officials will help mark the opening of the first 15 miles of Interstate 11 during a ceremony at 11 a.m. today, Aug. 9.

The Nevada Department of Transportation managed construction of 2.5 miles of the project, portions of which opened earlier, and the Regional Transportation Commission of Southern Nevada oversaw the 12.5-mile phase. Today’s event will celebrate the opening of the entire 15-mile stretch, which began construction in 2015.

The ceremony will be at the scenic overlook of Lake Mead on the southbound portion of the interstate. To attend, take the U.S. 95 exit heading south toward Searchlight, then turn left onto Interstate 11. The overlook is about 10 miles from the on-ramp.

Eventually, I-11 will connect the western region of the United States with Mexico and Canada.

A Boulder City family lost everything but was not injured in a fire that destroyed their home Aug. 2.

Nancy Jones, one of the victims, said she and her baby daughter were outside when the fire started and her son was going in and out of the house.

“I opened the door in the bedroom and there were flames all along the back wall,” she said. “It was just so fast. We’re still looking at what caused it.”

Boulder City Communications Manager Lisa LaPlante said the Boulder City Fire Department responded to the call and there was approximately $265,000 in damage.

According to the police dispatch log, the department had water on the fire within 11 minutes. It also requested assistance from Henderson Fire Department.

LaPlante said fire crews remained on the scene for a few hours after the fire to investigate.

Jones was treated for smoke inhalation she received while going into the house to find their cat, which died in the fire.

The Boulder City Fire Department is asking residents to be aware of a new telephone scam. The department received a call from a resident Aug. 1 about someone trying to solicit funds on its behalf.

The fire and police departments say they never attempt to raise money over the phone.

“When Boulder City Fire Department engages in fundraising efforts, you will actually see us in organized events,” said Division Chief Chuck Gebhart. “Whether it’s the ‘Fill the Boot’ campaign, selling hot chocolate at a parade or one of our pancake breakfasts, you will know your donation is going to us.”

“Some of the scams have become so sophisticated, the call looks like it originated from inside the community or even from the agency,” said City Manager Al Noyola. “These scams often prey on the elderly. Be sure you share this information with family, friends and neighbors who could be victims of such scams.”

If you receive a call asking for money, do not provide any personal information. You can report it to Boulder City Police Department at http://bcnv.org/FormCenter/Contact-Forms-3/Police-Department-65.

Representatives from the city and Boulder City Chamber of Commerce will be on hand to discuss legal and liability issues and its impact on the community, as well as answer questions.

The town hall will be moderated by Boulder City Communications Manager Lisa LaPlante.

If you cannot attend, send comments to llaplante@bcnv.org.

The Boulder City Police Department is seeking help finding a missing woman. Marcia Trujillo, 41, was last seen July 30, when she spoke with an officer indicating that she was fine and under no duress, according to city Communications Manager Lisa LaPlante.

Trujillo is 5 foot, 3 inches, and has red hair and blue eyes.

She was originally reported missing July 4 near the corner of Nevada Way and Elm Street.