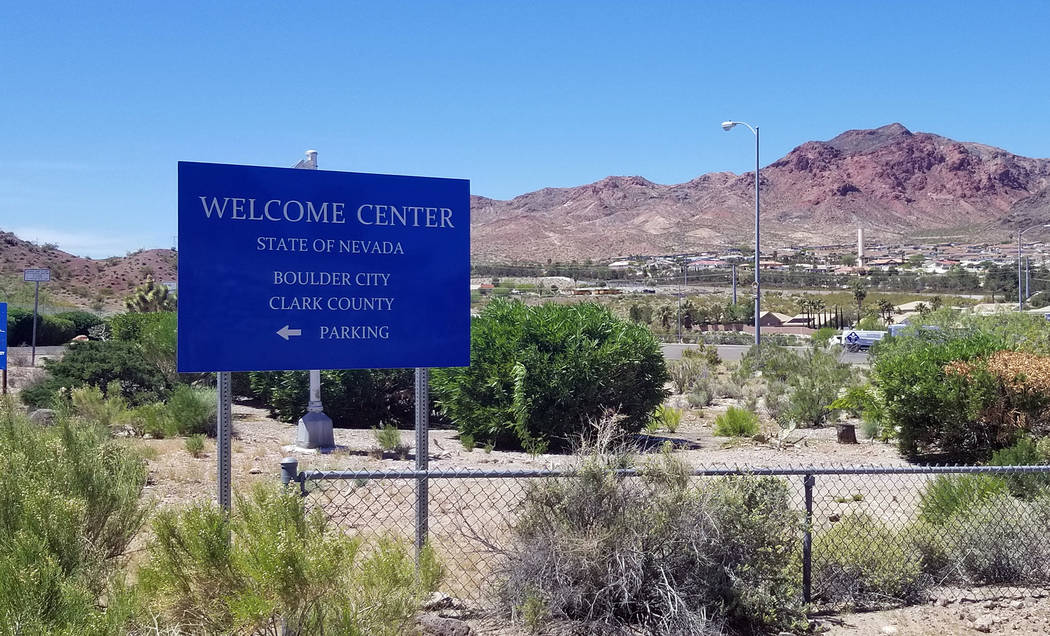 The Nevada Welcome Center at 100 Nevada Way will close July 1.

The center is operated by the Las Vegas Convention and Visitor Authority. City Councilman Peggy Leavitt confirmed the news and said an LVCVA representative would be meeting with her and Boulder City Chamber of Commerce CEO Jill Rowland-Lagan to discuss having space for the Boulder City materials from the visitors center to be displayed at the chamber’s office downtown.

LVCVA leased the property for the welcome center from the Nevada Department of Transportation. There are no definite plans for what the location will be used for after it closes.

The convention and visitor authority did not respond to numerous requests to find out why the center is closing.

The authority has been under scrutiny of the Metropolitan Police Department for misuse of gift cards that resulted in the arrest of a former executive and several top executives, including its CEO, leaving.

The human remains found at a nearby wash were recently identified by the Clark County Coroner’s Office as Joseph Mackanos, who was last seen in Boulder City.

Mackanos, 70, was reported missing Jan. 17, 2018. According the Boulder City Police Department’s original notice, he may have been in severe emotional distress and in need of medical attention. The police department was called to the remains April 1 after the National Park Service found a jaw bone and femur near a wash. No foul play was suspected.

“We are saddened to see this case close as it did,” said Chief Tim Shea after the identification. “Our thoughts and prayers go out to the friends and family of Mr. Mackanos.”

The cause of Mackanos’ death is still pending.

The sale of the old Browder building, 550 Nevada Way, has been finalized, according to the Clark County Tax Assessor’s website.

Local business owner Dan Fox purchased the property for $750,000 from Charles Lawson of Eldorado Gold LLC. The sale closed April 10, according to paperwork filed with the tax assessor’s office.

Fox said he plans to keep the “building as historic and Boulder City as possible,” but has not revealed what he plans to do with the structure.

The Browder building at 552 Nevada Way was built in 1931. Ida “Ma” Browder opened the town’s first restaurant there. She expanded the structure to include 554 and 558 Nevada Way in 1940, according to a 2012 report done by the city’s Historic Preservation Committee.

The item was part of the consent agenda for the council’s Tuesday, April 23, meeting.

The allotments automatically expire one year after issuance on April 24, 2019.

Boulder Hills Estates is being built by StoryBook Homes near the southeast corner of Bristlecone Drive and Adams Boulevard. Currently, 20 building permits have been issued for the subdivision. Storybook plans to build 127 homes there in three phases.