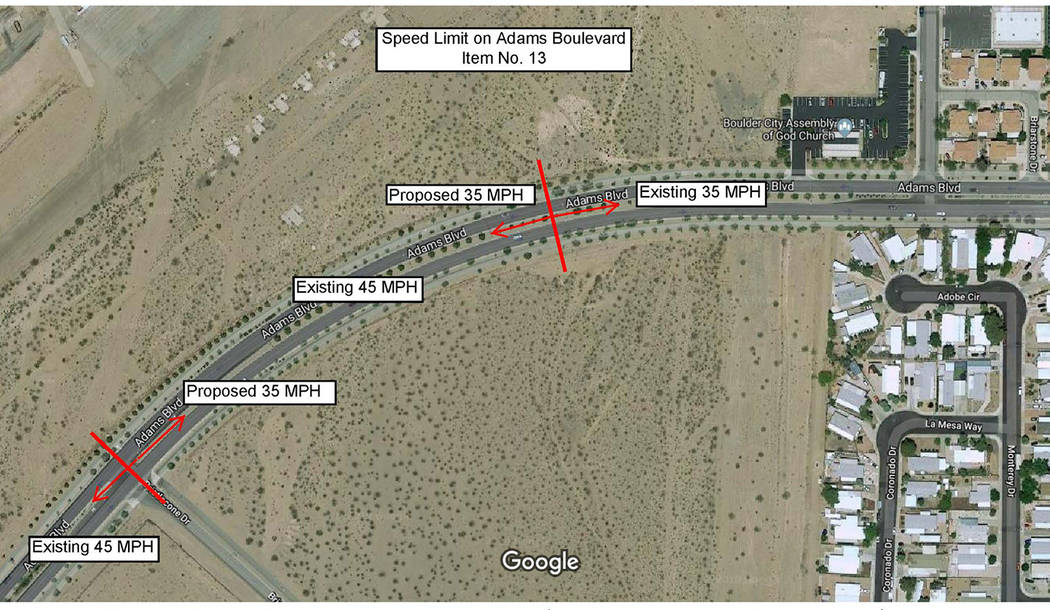 (Boulder City) The speed limit on Adams Boulevard from Bristlecone Drive to Buchanan Boulevard is being lowered to 35 mph from 45 mph.

The speed limit on Adams Boulevard from Bristlecone Drive to Buchanan Boulevard has been lowered to 35 mph.

It was previously 45 mph, and according to Boulder City, its internal traffic advisory committee recommended the change. City Manager Al Noyola approved it and new signs were installed Wednesday, April 17.

The speed limit on Adams Boulevard from Veterans Memorial Drive to Bristlecone Drive will remain 45 mph.

Former City Council candidate Brent Foutz’s trial on charges of unlawful trespassing and resisting a public officer has not been negotiated, and his trial has been set for 9:30 a.m. June 20.

The Boulder City Municipal Court charges stem from an incident in December 2018 in which he allegedly refused to leave the Nevada State Veterans Home, 100 Veterans Memorial Drive, after being told he was trespassed and must leave.

The criminal complaint states that Foutz lunged toward one of the officers in a “violent manner” and became more aggressive when they were trying to restrain him. Additionally, he refused to comply with orders and it took both officers to drag him to the patrol vehicle.

The complaint was filed by the city attorney’s office Dec. 10.

Foutz was one of eight candidates vying for a seat on the council in the 2019 municipal election. He gained 97 votes, 1.48 percent, and did not advance to June’s general election.