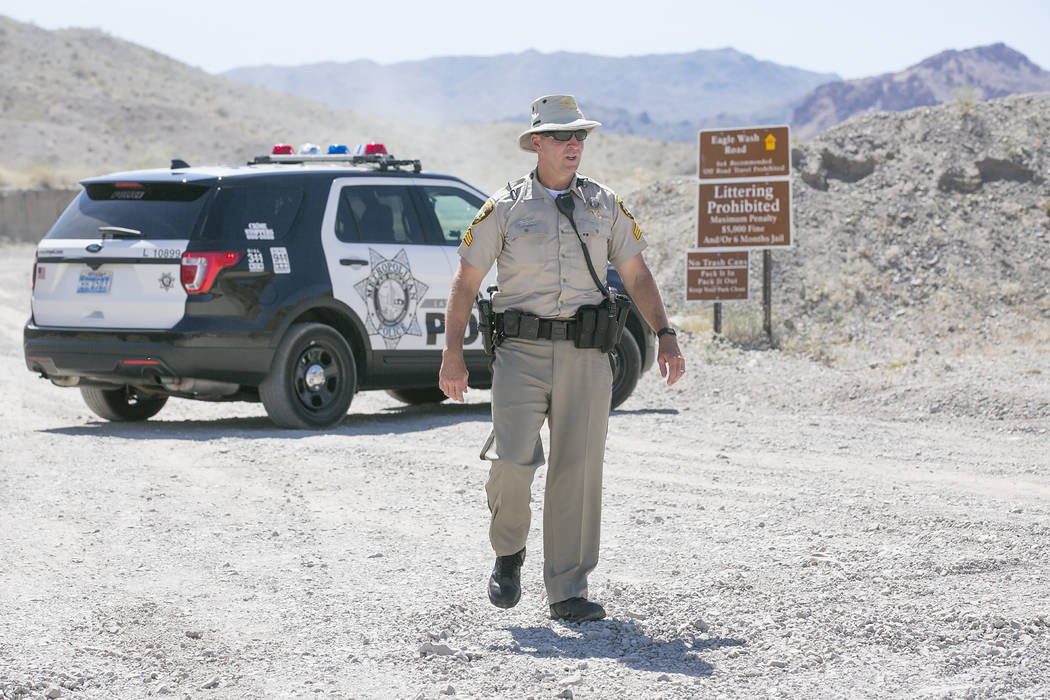 Park employees found possible human remains at Aztec Wash near Nelson’s Landing at around 9:48 a.m. Tuesday, according to Christie Vanover of the National Park Service. Employees were working in that area and smelled something foul. They discovered a partially exposed tarp and reported it.

Laura Meltzer, public information officer for the Metropolitan Police Department, said they received a call at around 11:28 a.m. from the park, and sent detectives to there. Homicide was also notified. Both Metro and park rangers were trying to determine whether the remains were human. The Clark County coroner’s office is also helping to identify the remains.

Forum for City Council candidates will be held at 7 p.m. May 15

The Boulder City Review is hosting a candidates forum at 7 p.m. May 15 at the Elaine K. Smith Center, 700 Wyoming St. All four candidates — Warren Harhay, Kiernan McManus, John Milburn and incumbent Cam Walker — running for two open seats on the City Council have been invited and are expected to attend.

Questions for the candidates are being sought and can be submitted to Editor Hali Bernstein Saylor at hsaylor@bouldercityreview.com. They must be received by 9 a.m. Monday, May 8.

An ultralight plane crashed at the dry lake bed Sunday morning. Boulder City Fire Department Chief Kevin Nicholson said firefighters discovered that the crash involved a man and a woman, who were evaluated and then transported to the hospital for minor injuries.

According to the Boulder City Police dispatch log, the man and woman were in their 60s. The man received cuts on his left hand and a broken arm, and the woman had a broken left arm.

According to Boulder City’s Public Works Department, monitoring of the unregulated contaminants helps the Environmental Protection Agency to determine where they occur and whether they can be regulated in the future. The water quality report is issued each July and done in accordance with the federal Safe Drinking Water Act.

Nevada Volunteers, the Governor’s Commission on Service, is accepting nominations for the 2017 Governor’s Points of Light Awards. The awards recognize the volunteer efforts of Nevadans and are the highest honor bestowed by Nevada Volunteers and the state.

Nominations will be accepted through May 31 for volunteers, volunteer managers and volunteer programs. Three finalists from each category, selected by a panel of judges, will be recognized in the fall in Las Vegas.

“The Governor’s Points of Light Awards showcases how in every corner of our state people are coming together to help others and improve our communities. I hope you will join me in recognizing the countless individuals and organizations serving Nevada by submitting a nomination in May for the Governor’s Points of Light Awards,” said Gov. Brian Sandoval.

Nomination criteria include: shows achievement that is exemplary, far exceeds expectations and is measurable; addresses a need not previously met; demonstrates innovation by applying a new solution to an existing social program; exemplifies mobilization by empowering the community to support the program or event as demonstrated by the quantity or quality of volunteers; shows endurance or sustainability by developing a long-term solution to significant social issues through hands-on volunteer service.

Nominations can be submitted at http://bit.ly/2017GPOL.