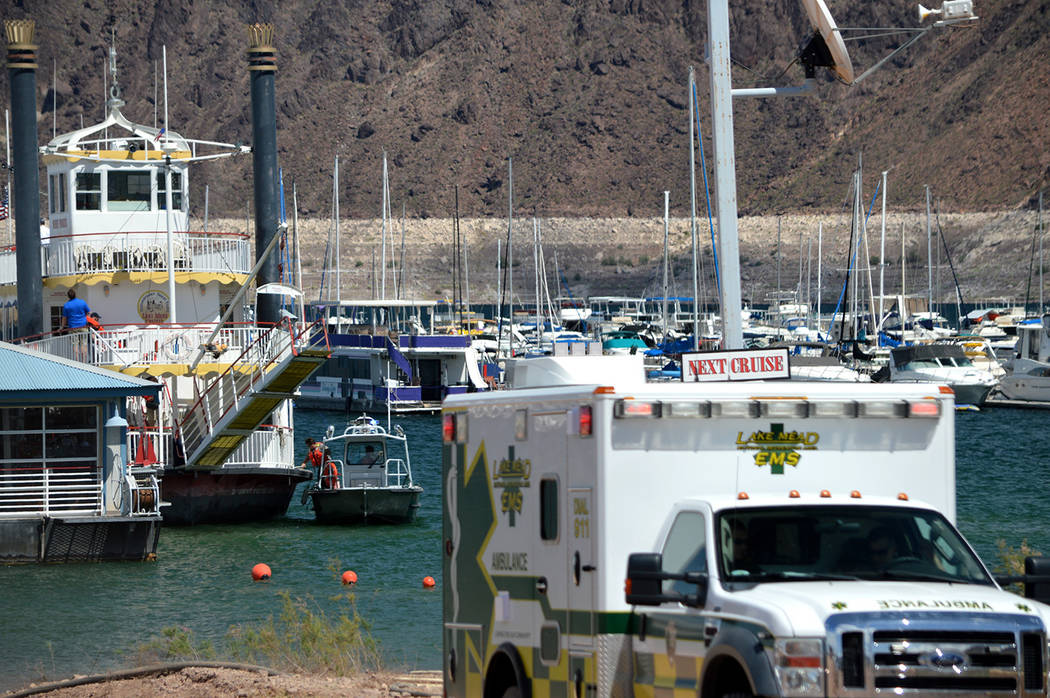 Paul Luisi The Desert Princess, a Mississippi-style paddle wheeler, lost power while out on Lake Mead with 163 passengers aboard Tuesday. One crew member received minor injuries and other boats in the marina were damaged, but no passengers were hurt.

U.S. Highway 93 to be reduced to one lane in each direction

U.S. Highway 93 will be reduced to a single lane in both directions between the U.S. Highway 95 interchange and Railroad Pass casino in Henderson from 9 p.m. Friday to noon Sunday.

The closures will allow crews to install a shoo-fly, which is a temporary road around construction on a 2-mile stretch between mile markers 10 and 12. The construction is part of the first phase of Interstate 11.

The shoo-fly will be in place for five months.

Kerry Ahearn, who has served as the manager of the Boulder City Municipal Airport for the past eight years, resigned March 28, according to Sue Manteris, an official spokesperson for the city.

Manteris said that Assistant Airport Manager Marissa Adou is serving as acting airport manager, and the city is currently recruiting for a new manager. Recruitment for the position is open through April 29.

The municipal airport is off of Veterans Memorial Drive at 1201 Airport Road. Pilots and passengers use the facility for personal, business and recreational flying.

to be moved across road

The proposed 69kV transmission loop on Nevada Way is getting a small change, as the overhead lines will now be on the west side of the road between Quartzite Road to U.S. Highway 93 instead of on the east side. Boulder City Public Works Director Scott Hansen said that from a functional standpoint it will not change the project. Rather, the overhead line is being moved from the right side of the yellow line to the left. Residents in that area requested the change.

Hansen said the new location of the overhead lines will not change the project’s timeline, but a slight increase in the cost is anticipated.

Boulder City Post Office experienced long lines for passport services during spring break, April 10-14. Robbie Lopez of the post office attributed the long lines to the holiday as well as the passport boom 10 years ago, as all those passports are now expiring. Lopez said the Boulder City branch averaged 80 passports a day during spring break; it normally averages 20.

The branch is one of the few in Clark County that does walk-in appointments.

The Desert Princess paddle wheeler that offers cruises on Lake Mead to Hoover Dam lost power Tuesday afternoon, but all 163 passengers aboard were safely returned to shore.

The boat reported losing power around 12:30 p.m., making a distress call to the Lake Mead Interagency Communication Center. The strong winds, which were gusting above 30 miles per hour at the time, pushed the triple-decker vessel into slips at the Las Vegas Boat Harbor and Lake Mead Marina.

Crews with the National Park Service, Las Vegas Boat Harbor and Nevada Department of Wildlife responded. The vessel was pushed toward the breakwater where around 60 passengers were put onto patio boats and brought to shore.

The winds then shifted, causing the vessel to drift from the breakwater. Around this time, the crew was able to restart the boat and pilot it back to the landing where the remaining passengers safely disembarked.

One crew member was injured and was transported to a hospital by ambulance with minor injuries.

The incident is under investigation by the National Park Service and U.S. Coast Guard.