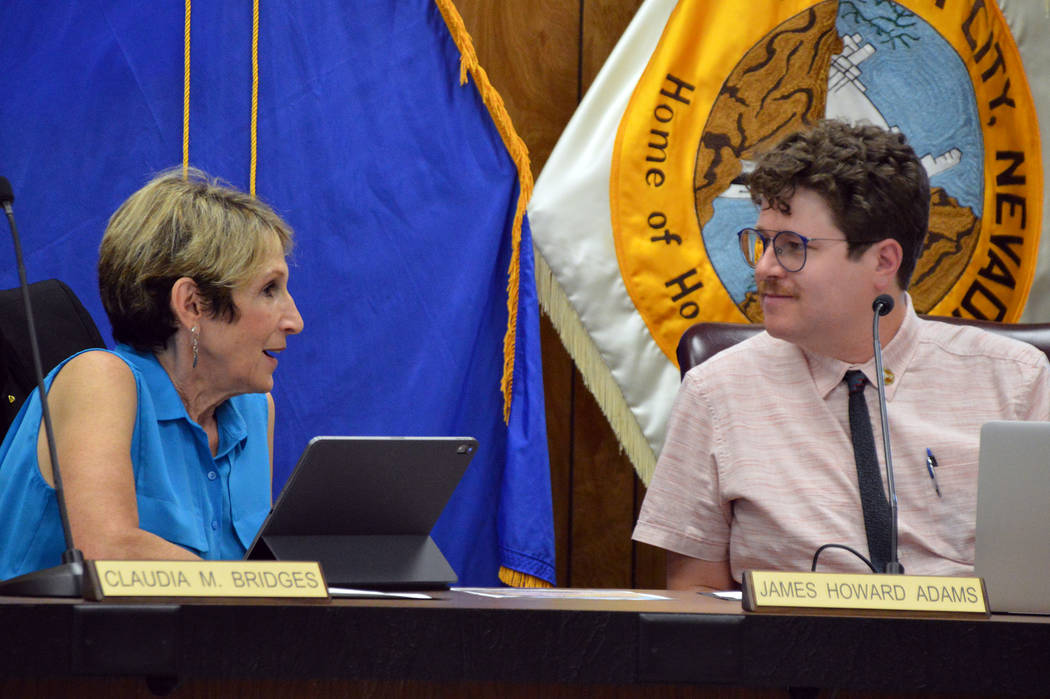 During their first meeting as the community’s new leaders, City Council members voted 3-1 not to hold a special election to fill the vacant seat despite one council member supporting the option.

City Clerk Lorene Krumm said they had two options to fill the council vacancy. They could hold a special election or appoint someone. The person who would be appointed must be a qualified elector, have lived in Boulder City for at least two years and be appointed within 30 days of the decision. If they chose to hold a special election, it could cost between $30,000 and $40,000.

Councilman Warren Harhay, who participated in the meeting over the phone and voted against the appointment option, said he thought a special election should be held in order for the process to be transparent. He said every current member of the council had been endorsed by a local Facebook group, the Boulder City Community Alliance, and it could be perceived the council needs to pay the group back. He also said he believed the founders of the group had already expressed a desire to fill the seat.

“I feel uncomfortable with appointing one … . I would rather have the people decide … . The goal is not to save money,” he said. “The goal is to provide Boulder City the best governance it can have.”

Resident Kelli Carlson said she thought the council should hold a special election.

“I feel that all of the residents should have the chance to have their voice heard because it’s a two-year term,” she said.

McManus said he didn’t believe who endorsed them has “any swing at all” with who they appoint. Additionally, he said they don’t have anything to do with this process now.

Adams said the special election would be the most democratic way to proceed but the majority of the residents he had talked to said they did not want one.

“I would be remiss in my duties to do the election with so many people who said they didn’t want it,” he said.

Adams was also concerned about the cost.

“We were elected and given the trust to make this decision … . I know there are some good people interested in this,” added Bridges.

She also said her responsibility was to Boulder City and not to a group. She suggested coming up with a structured process for the appointment.

Residents also expressed a desire to have the seat filled through appointment rather than a special election. Although one suggested a third alternative.

“You should look at the runners-up and offer it to one of them,” said Bobbi Ohlinger-Johnson. “I believe it could go a long way in healing the relationships in the community.”

Those interested in filling the vacancy should contact council members, who will appoint someone at the next meeting July 9.

Council tabled appointing its members to various county and state committees until the July 9 meeting except for the position of mayor pro-tem. Bridges said she wanted to serve in the position because of her experience at the academic level and because she received the most votes in the election.

McManus, however, nominated Adams for the post because he said he was aware of the council process as he’d been coming to meetings for several years. His appointment was approved with three votes.

■ Approved an interlocal agreement with the Regional Transportation Commission of Southern Nevada to increase construction funding for the complete streets project on Boulder City Parkway as well as a contract with American Civil Constructors for construction services. Council also approved reallocating approximately $700,000 in leftover funds from some capital improvement projects to the work.

The project has a guaranteed maximum price of $15.8 million. It is expected to begin the second or third week of July and take 10 months to complete.

■ Approved the final acceptance, payment and release of bonds and retention funds for phase two of the Eldorado Valley water-line project. The project was estimated to cost $598,298, but Public Works Director Keegan Littrell said it came in approximately $100,000 less.

Additionally Littrell said staff is looking at the contract to determine whether the city is finished with the water line or will need to extend it further.