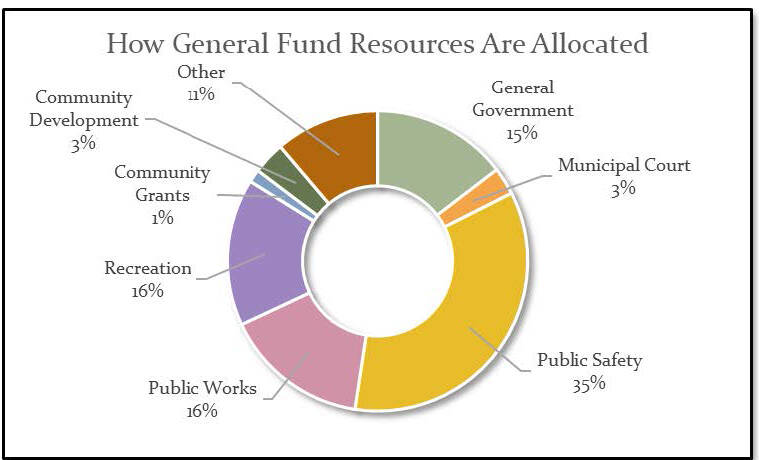 At its Tuesday, May 24, meeting, City Council approved 4-1 the 2023 fiscal year budget that includes $37.3 million in general fund revenue and $42.7 million in general fund expenses. The expenses are higher than the revenue because they include a $3.6 million transfer to the acquisitions and improvements fund and $1.1 million for contingencies.

According to the staff report in the council meeting packet, the general fund includes: $305,000 in American Rescue Plan funds, a $45,000 increase to the workers compensation premium, a $74,000 increase to health insurance premiums, a 3 percent salary increase for nonrepresented employees and an $11,000 increase in landscaping operations and maintenance for a new dog park.

Councilwoman Claudia Bridges asked what would happen to the $11,000 if the proposed conversion of the softball field at Veterans’ Memorial Park to a full-time dog park didn’t happen.

Budget Manager Angela Manninen said the money is not specific to that project.

“So a budget is a plan, and there is a plan to hopefully have a dog park within the year for Boulder City,” she said. “That $11,000 would assist landscaping for that. If the dog park doesn’t happen, the $11,000 won’t be spent. But if we don’t put it in right now and we do have a dog park, we can’t add it later.”

The ARPA funds also include $72,000 for a municipal dog park.

Bridges and the rest of the council members thanked staff for all the work they put in on the budget.

Mayor Kiernan McManus expressed concern because the utility fund’s administrative costs seemed to grow substantially each year without an explanation.

The utility administration fund is made of transfers from the individual utilities.

Central services includes $1.025 million in interfund reimbursements for services provided from personnel represented in the general fund to the utility fund.

“The administration is basically the administration,” said Manninen. “It’s the director and all of his staff that support the utilities but they don’t support just specific utilities … so that’s why they’re not broken out into individual utilities. And billing and collections is just that. It’s the utility billing staff, the service charge that is charged for credit cards. It’s everything that is related to utility billing.”

“The point I’m getting at is the reasons being given for these charges don’t seem to be supported, and it’s a significant amount of money that comes out of the utility fund,” McManus responded.

He did say he was pleased to see the utility fund reserves growing and that it was putting the city in a position of financial security.

In addition to issuing the only dissenting vote against the budget, McManus also voted against job classification titles and their salary ranges.

He said he thought the pay levels at the lowest level for city employees should be increased more now rather than when the compensation study comes before the council for action and that the appointed officials should not be lumped together with city employees.

“I believe that the city charter is very clear in regard to the difference between appointed officials and employees,” he said. “And this seems to group them all in together for consideration as employees. I think that’s a very dangerous thing to do. I think it is in violation of the city charter and is not something I’m in agreement with.”

The rest of the council members disagreed and voted for the new classification titles and salary ranges.