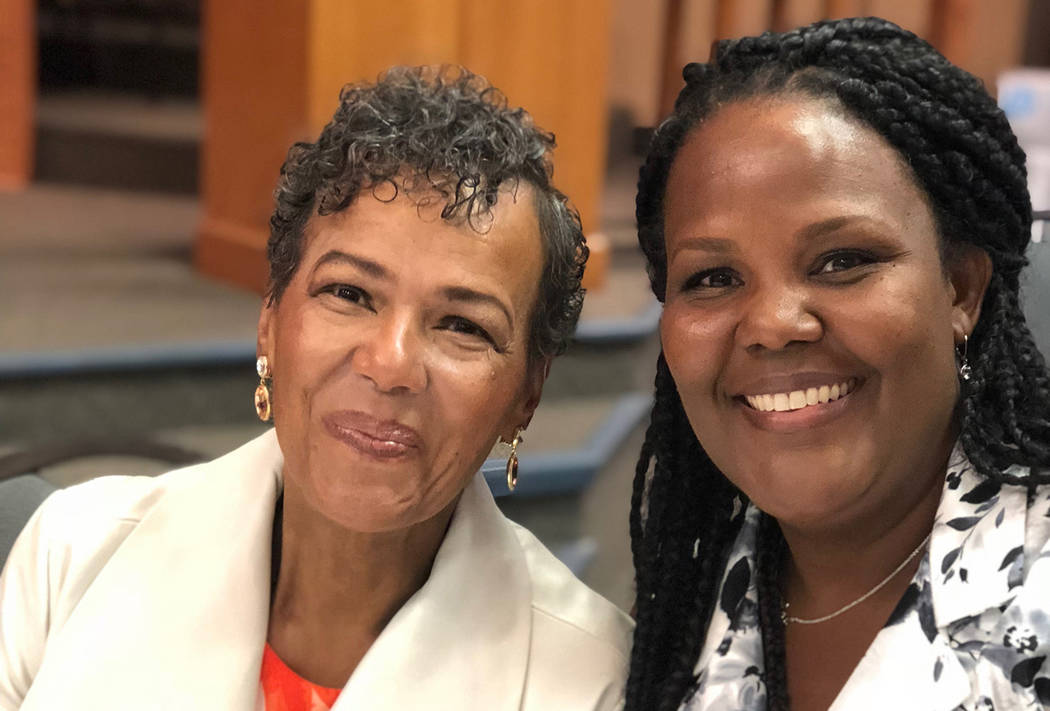 (Irene Lovelace) Irene Lovelace, left, and her daughter Alana Dowling have been foster moms to about 50 children at St. Jude's Ranch for Children in Boulder City, one of which Dowling legally adopted.

With several toddlers in the house, Alana Dowling and her mother, Irene Lovelace, apologize for toys being everywhere and the noise level being a little high. But they wouldn’t have it any other way.

“This is my happy place,” said Lovelace, sitting in a chair, rocking an infant to sleep.

The two have been house mothers at St. Jude’s Ranch for Children for a little more than three years. Their cottage houses the pregnant and parenting teens, serving as home for girls as young as 12.

They have one of the most successful programs at the Boulder City campus, which provides a home for abused, neglected and at-risk children. Later this month, three of their charges will graduate from Boulder City High School, including two who came in deficient in credits and now have 3.8 GPAs.

“They are beating the odds mostly because of this program,” Dowling said.

Seeing the children blossom under their guidance is Dowling’s favorite part of being at St. Jude’s Ranch.

“This is not just a job; it’s an opportunity to connect with kids who really need someone in their lives,” she said.

For Dowling, her time as a house mother has brought much more than just the satisfaction of seeing the children in their home grow and succeed. It brought her a son.

“When I started here, that wasn’t even a thought,” she said. “Through our training they tell us to try not to get too attached because of their circumstances. With this kiddo, I tried but it didn’t work.

“From day one we bonded. I pretty much knew a few weeks after I got him that it wouldn’t work for anyone else to get this kid,” Dowling said.

She was able to legally adopt her son, who is now 2 and “thriving.”

“I was resolved to be just a foster mom. … Once God brought him to me, I knew he was not going anywhere else. I know his purpose was for us to be a family.”

Dowling said every day brings something different but never a challenge that she and Lovelace can’t tackle.

Not only do they provide a stable environment for the girls to help turn their lives around, they teach them what it means to be a parent, Dowling said.

They help the girls with their academic studies and teach parenting classes.

“The important thing for us is that we’re consistent with them,” Dowling said, noting that some of their wards have never experienced that.

Also key to their success is letting each girl know that someone is in their corner.

“Once in our home, they are forever in our hearts,” Lovelace said.

Currently, they have four mothers and five babies in their house, including Dowling’s son.

Since they began at St. Jude’s, Dowling and Lovelace have fostered about 50 children. Some have transitioned and aged out of the program, some were reunified with their families, and some were adopted by new families.

“We stay in contact,” Dowling said. “They understood we cared about them; this was not just a placement.”

Before starting work at St. Jude’s, Dowling often volunteered in the community, helping single mothers and families that were struggling.

“”My mom instilled in us when we were young to help the underdogs,” she said.

“For us to do this, it was a no-brainer,” Dowling added.

Lovelace said her desire to help others stems from a promise she made to God.

“I was sorta kinda a single mom,” she said. “I married young, had my kids young and divorced.”

Being on her own wasn’t easy — even with the support of her eight siblings — but she said she promised to help other single moms if God would give “her success raising her kids.”

“I can’t imagine what other single moms without support what they go through,” she said.

Dowling and Lovelace learned about St. Jude’s Ranch and its programs through Lovelace’s youngest daughter, who was working on campus as the clinical director. They thought the idea of working there matched their goals and attended an event to “scope out” the situation.

Dowling said St. Jude’s had wanted each woman to supervise their own cottage, but they insisted it was a team effort.

“We’re strengthen each other,” Dowling said.

Creating that family bond, regardless of how they came together, is what makes every day Mother’s Day for them.