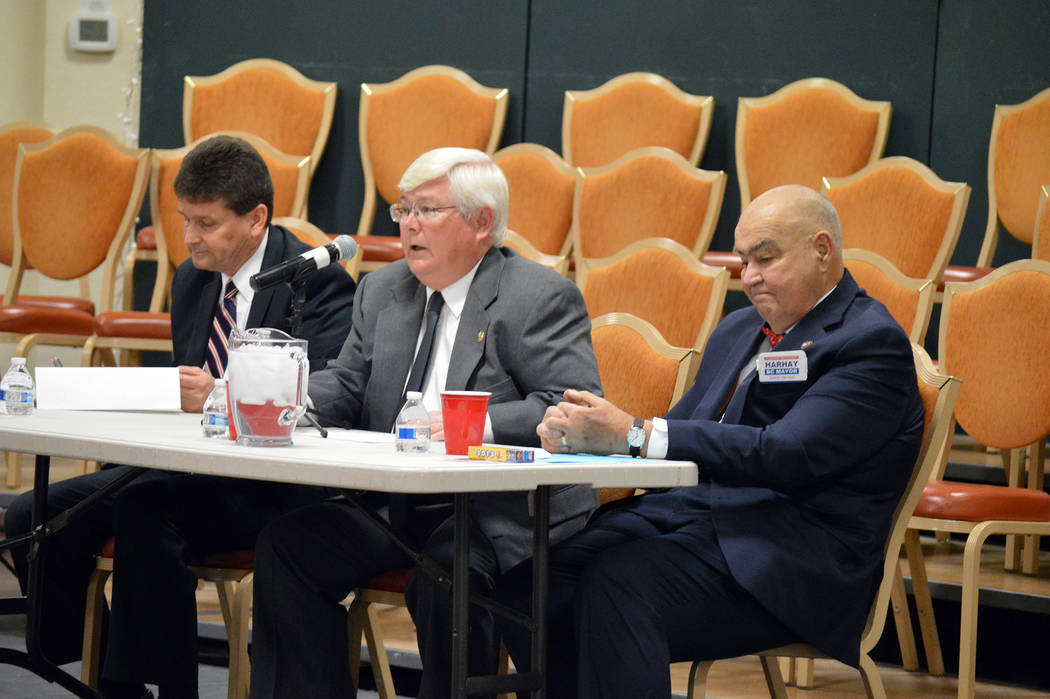 Boulder City residents heard from the three mayoral candidates on a variety of issues — including controlled growth, historic preservation and the proposed aquatic center — at a recent candidate forum.

On Monday, March 4, Rod Woodbury, Kiernan McManus and Warren Harhay answered questions submitted by the public at an event hosted by the Boulder City Review.

McManus and Harhay are members of the City Council and are challenging Woodbury for the position of mayor. They are all facing off in the April 2 primary election.

“I think it was very informative,” said Charm McElree. “I would question some of the answers, but that’s politics.”

Charlie Hauntz said he appreciated the forum and thought it was interesting.

“I like the answers,” he said. “I think they were representative of what they felt.”

“I think public support for what they do is important,” said Michael Giroux.

He said their job is lots of work with little pay, and he appreciates them being willing to do it.

Giroux also weighed in on the proposed new pool, part of the evening’s discussion.

“This aquatic center has really become a … hot topic for the town,” he said.

Giroux said he and some friends play racquetball at the current aquatic center several times a week, and none of them want new courts installed as part of the part of the project. He said they want to keep the existing ones.

“I’m glad all of them are going to listen to the people,” he said of the candidates.

The council recently approved a ballot question to ask the voters whether $40 million worth of bonds should be issued by the city to pay for the proposed aquatic center. During the forum, all three candidates discussed their concerns about the project and how to fund it.

Additionally, all three candidates said they were pleased with the city’s controlled-growth ordinance and have no plans to change it.

“It’s been great for the community,” Woodbury said. “I definitely support it. … We love our small-town charm and intend to keep it that way.”

McManus said he supported the type of growth that supports the city and he had been worried about several large parcels of land being put on the land management plan. All those parcels were recently removed from the plan.

“Those are not in-fill projects,” he said. “They are extending Boulder City out from what it is currently. … I think we need quality growth in Boulder City. … I don’t see a need for us to go far beyond what we already have.”

Harhay said Boulder City is a “unique and independent” city in Nevada and it should stay that way.

“It has worked,” he said about the controlled-growth ordinance. “Usually you don’t fix things that are working. … It has kept Boulder City Boulder City.”

Harhay also said that historic preservation is absolutely needed to help Boulder City remain the same and that its properties should be maintained.

“We should not be considering selling city properties. … I would oppose anything in the future that would disperse or demolish historic properties,” he said.

McManus said preservation is “protecting and promoting the architecture” currently in the historic district, and he said the city needs a code that does that.

“These codes are developed not to harm anyone but to help improve the value of their properties,” he said.

According to Woodbury, the next step should be to create a historic preservation arm of the community development department. He also said he would recommend that a full-time position be added during the city’s upcoming budget process, and he wants to incentivize people to do good things with their property.

“It’s not just buildings,” he said. “It’s the history that goes with those buildings.”