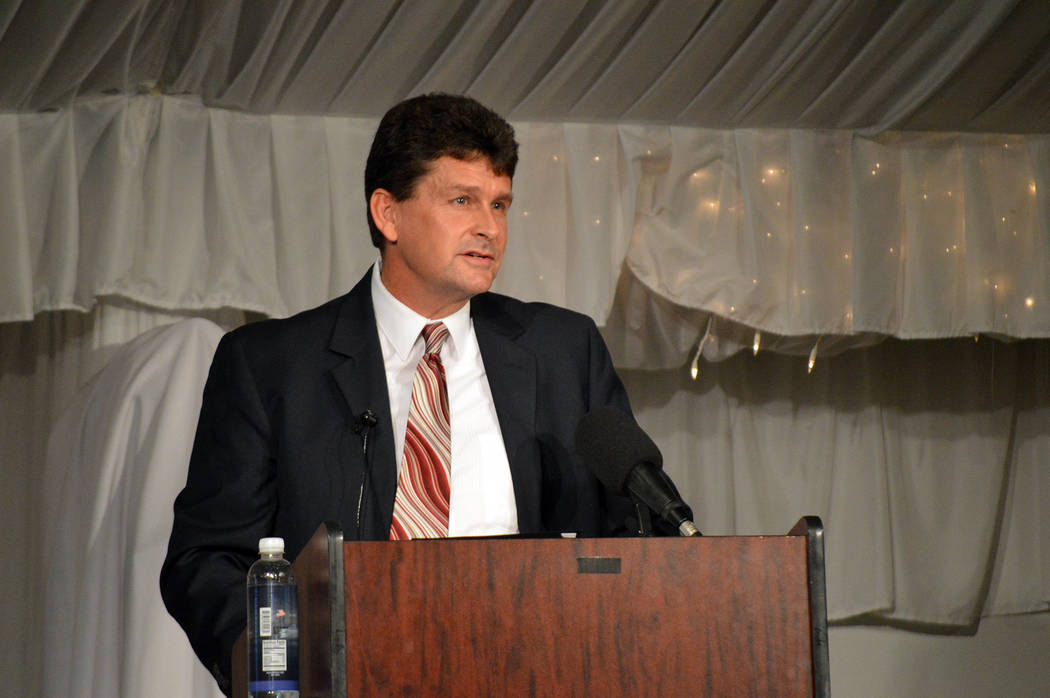 At the annual State of the City, Mayor Rod Woodbury presented several ways the city is planning to adapt with Interstate 11 opening soon.

In his presentation at the Boulder Creek Golf Club on Feb. 1, he shared several city “gateway” projects the community development office has undertaken to help Boulder City in this transition.

One is the relocation of Oregon-based Medolac Laboratories to the old Vons/Haggen grocery store on Boulder City Parkway. The company processes human milk for babies and will be bringing its corporate headquarters and lab to town. It plans to hire 30 local employees soon and up to a 100 more in the future.

Woodbury also referenced new construction as another way the city will be helped. A tentative map for StoryBook Homes’ 127-lot subdivision at the corner of Adams Boulevard and Bristlecone Drive was recently recommended for approval by the Planning Commission.

“So if all goes well, they could break ground this summer or spring, and the city will also welcome not only the extra revenue but also quality new housing opportunities for Boulder City families,” he said. “After years of no growth, this storybook ending to a drawn-out saga of stagnation is a welcome one indeed.”

The Nevada State Railroad Museum also plans to build a new visitors center across from the gateway arch on Buchanan Boulevard and, in conjunction with the complete streets beautification project, will make that area more appealing to visitors.

“These and other projects … are all designed to enhance the gateway into Boulder City and bring tourists to our community,” Woodbury said.

Boulder City also has many recreational opportunities, and the city is working with the Regional Transportation Commission of Southern Nevada on a study that will allow residents to help improve those opportunities. That study will begin in March.

Woodbury also talked about a partnership between Boulder City High School and Boulder City TV. Students at the high school would be the producers, videographers and field producers, possibly producing a monthly television program with state and local programming. This partnership would be possible because of the new video equipment and broadcast studio at the high school.

“I loved that he was able to highlight Boulder City High School,” said Principal Amy Wagner. “As a principal, it’s awesome to hear all of the opportunities for our city.”

In his vision portion of the presentation, Woodbury spoke about light and dark and compared them to the solar eclipse. He also questioned the motives of the media and encouraged them to focus on the positive things happening.

The State of the City address was streamed live.