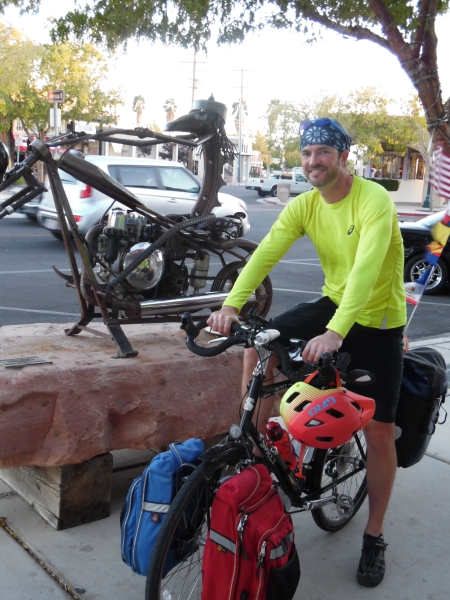 A nationwide civility project, that will cover nine regions of America and roughly 17,000 miles, made its way through Boulder City on Monday when Conversations With US founder Chris Register rolled through town.

The self-proclaimed “cross-country bicycling journalist” — yes, Register is trekking through America on bicycle — is traveling the country in search of what Americans think of their country.

“Right after the election in 2008, you hear these folks talking about how to fix America’s problems,” Register said. “So I thought, ‘Why don’t I just talk to people?’ I wanted to flush out their values and things that are important to them.”

Register said that at its core, Conversations With US is an exploration of America’s frustration with the dysfunction of government and what the American ideal is supposed to be.

Visiting each region lasts around six weeks, with Register biking 50-55 miles between stops each day. At the end of each tour, Register ships his bike and buys a plane ticket back to Houston, where he lives.

Register said he tries to eat and drink as much as possible, so that he has the sustained energy for his trips. As for sleep, he said he gets his eight hours whenever and wherever he can, saying he’s slept everywhere from motels to camping out behind churches and police stations.

The entire campaign, including travel, food and shelter, is self-funded by Register, who stepped away from his day job as an attorney to fulfill his dream project.

Register stopped in Boulder City during his American Southwest trip after marking down Hoover Dam as a point on his tour.

Register tours from spring until fall, taking the winters off in order to map out the next leg of his project.

He said once the project is completed, the next step will be to publish a book on what his research found. He said whether that will be in one large publication or printed in installments is still something he’s deciding.

“My goal is to get Americans on one political side or the other, or one race or another, to read about folks and hear from folks that they would otherwise never have the chance to meet,” Register said. “What I want folks to do is understand the humanity of everyone; that includes what’s best for America. Then once we’re on the same page, we can talk about how to work on that.”