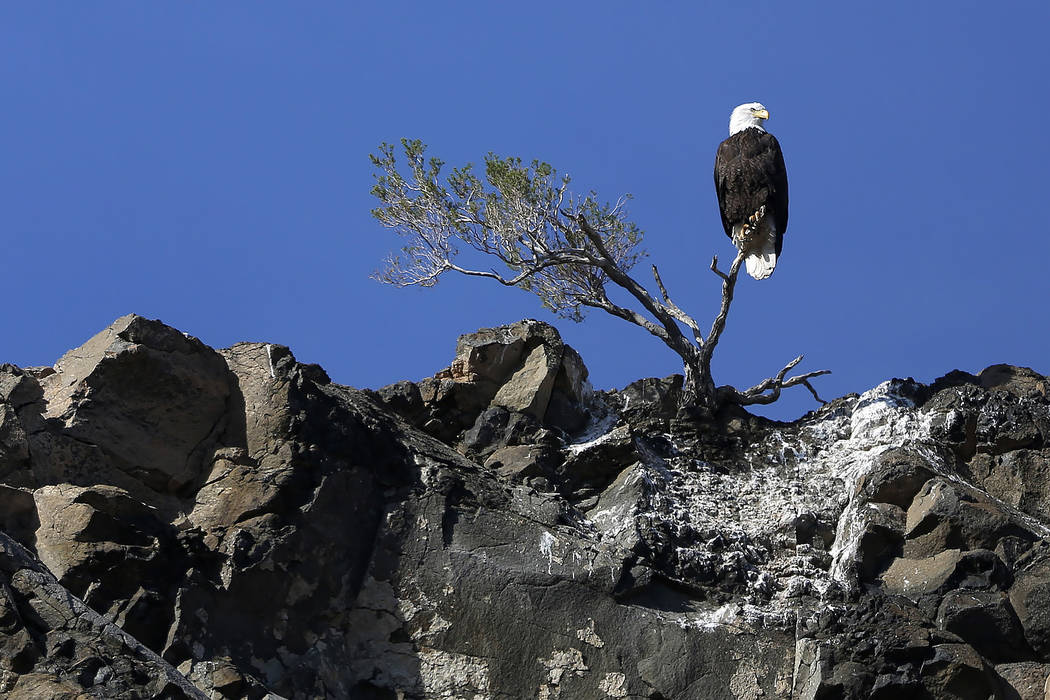 Andrea Cornejo/Las Vegas Review-Journal A bald eagle perches on a small tree in Lake Mead National Recreation Area on Jan. 17. Teams set out at dawn to survey the local bald eagle population as part of a national effort to track populations and trend counts. 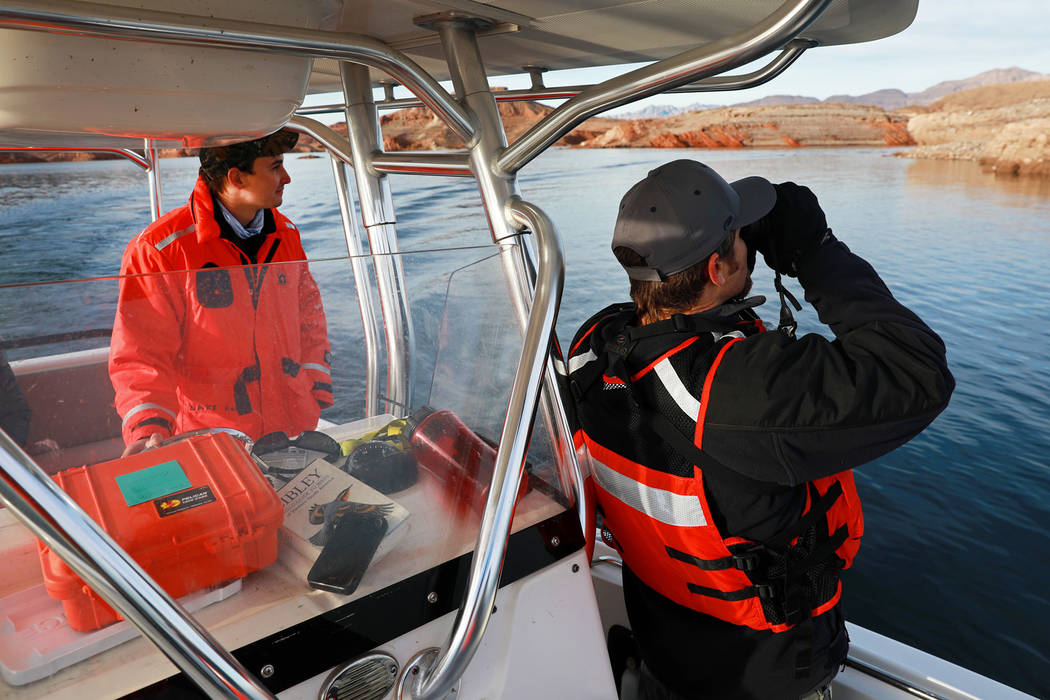 Soon the team of four was out on the lake, scouring the Overton Arm for signs of majestic bald eagles.

The team was one of eight groups surveying bald eagles across Lake Mohave and Lake Mead.

It was a long day, but the dawn-to-nearly dusk efforts paid off with good news.

The groups counted 137 bald eagles and five golden eagles — the highest number at Lake Mead in five years and above the 10-year average. Forty were counted at Overton Arm.

The count is part of a national eagle survey that dates from 1979 and is designed to track the population and distribution of a species that was close to extinction in the lower 48 states when it was listed as endangered in 1967. The recreation area began participating in the survey in the 1990s.

Thanks to widespread habitat protection and the elimination of the pesticide DDT, the population rebounded from fewer than 500 nesting pairs in the lower 48 to 20,000 birds by 2007, when the species was dropped from the endangered list.

It was 48 degrees Fahrenheit when the group headed out. As the boat’s engine hummed, the sky turned cotton-candy pink behind the sandstone rocks.

The glow of the morning cast shadows on Ben Smith’s face. The 6-foot-tall fish aquatics specialist was captain for the day and participating in the survey for his fifth consecutive year.

As the boat cut through the water, Joseph Barnes held binoculars in one hand and an energy bar in the other. The man with the russet-colored sideburns and goatee has tracked eagles at Lake Mead and for the Nevada Department of Wildlife, where he serves as supervising wildlife biologist, for about 15 years.

He scanned the landscape for eagles.

“You undoubtedly count them over again, but you do miss some,” Smith said as he turned the boat wheel. “The idea is that they even out.”

Then, Barnes spotted one. Flying just over the mountains at 7:25 a.m., as the sun started casting bright light over the horizon.

“Adult, flying, bald eagle,” he said. It had the striking white head.

From behind reflective blue sunglasses, Nichelle Rich, a recreation area supervisor, added the first eagle tally to the chart and marked it on a map.

At 7:27 a.m., Barnes saw another, this time a juvenile, perched on a rocky dome. The adults are a lot easier to spot, while the juveniles are nearly all brown.

In the lake, a black American coot fluttered by. In a different setting, he’d be prone to spooking, Barnes said. But he hung out close to the boat as it covered the lake, creating ripples and waves through the water. His relatives skipped across the water.

At 7:33 a.m., an adult eagle was spotted, perched on a branch atop a mountain.

Starting in mid-November, the 3-feet tall birds with wingspans of 6 to 7 feet travel to Nevada from the North. They stay for about two to three months and leave in mid-February.

The vast majority of the birds counted during the survey are wintering, but some eagles nest 10 miles south of the Hoover Dam, on 500-foot cliffs. The eagles on the top of the food chain have five known resting places in Southern Nevada, and in parts of Arizona, there is a pocket of nests for birds that migrate north in the winter.

They come to Nevada for the temperate climate and the food, he said.

“They’re generalists, opportunists,” he said. “They catch gizzards, bass, they’re not too proud to take a dead animal off the shore.”

Barnes saw another immature bald eagle, probably around 2 years old. It had dark cheeks and a lighter, speckled chest.

“He’s still fairly young,” Barnes said. “He’s got a lot of growing up to do.”

Barnes, 42, grew up on an Ohio farm with chickens, ducks, geese and apple orchards. The experience, he said, fostered a love for wilderness.

When he moved to Nevada in 2004, Barnes said he took note of the stark difference between developed beauty in the Northeast and the wildness of Southern Nevada’s desert.

“They find a way to make a living in the desert,” he said of the birds. “That intrigued me.”

At that moment, a red-tailed hawk spread its wings. “Oh, he’s going to show off,” Barnes said, taking a bite of his turkey and spinach on rye.

Smith maneuvered the boat to dip in and turn around.

“Look at that one flying, Joe,” he said. He pointed to another bald eagle, but it was too far away for them to determine its age.

Nearby, burros feasted on wispy grass. Rams, their massive brown horns curled like alligator tails, stood by the shore.

Hours later, as the group pulled the boat toward the shore, the sun was creeping back toward the horizon.

Barnes stood on the dock, facing the lake. It was a strange dichotomy, he said. How the man-made reservoir, juxtaposed with what nature intended, had created a solid benefit for wildlife as a whole.

And because the eagles don’t necessarily migrate in the same place from year to year, he said, the nationwide survey helps to understand migratory patterns and monitor the routes of the once-endangered species.

“Bald eagles play a special role both in my research, but also in the American persona,” he said. “They are the symbol of a wild, kind of fierce independence.”