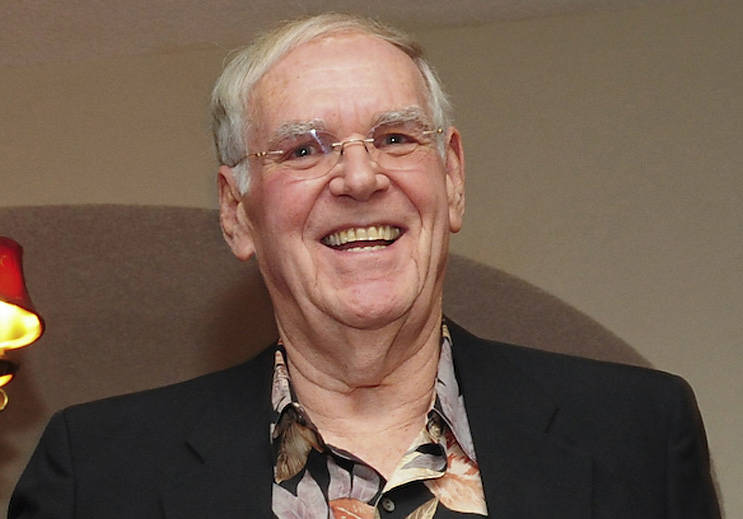 The Burks were recognized several times for their work on behalf of the city’s cultural arts and were the second recipients of Boulder City Hospital’s Heart of the Community award.

“Vern Burk was a model trustee of the hospital,” said Tom Maher, CEO of Boulder City Hospital, where Burk served for more than a decade. “He possessed a clear sense of his role and understood the boundary between governance and operations. He asked good questions and kept all of us on our toes. He was humble yet commanding, intimidating yet comforting with his stature and baritone voice. He was generous to our employees, insisting on buying each one a ticket for the Art in the Park raffle every year. He gave generously during my calls for donations for the Nevada Hospital Association HealthPAC fundraiser. He insisted on recognizing excellence in whatever form it was displayed and he had the courage to speak publicly for hospital initiatives that may have created some division among stakeholders. His strong and gracious presence will remain in my memory.”

Wendell Whitman, who served with Burk on several nonprofit boards, said he “delivered wise counsel and a humble, caring approach. He was a gentleman and a true servant leader.”

He said Burk would remain in the background while his wife served as their “voice and face of their giving to the community,” yet made sure “everything was done perfectly.”

“Dad’s biggest job was supporting Mom,” said their oldest daughter, Dianna Denman. “She came up with ideas, and he implemented them.”

Among his projects were building train sets and birdhouses that were auctioned to raise money to support the Boulder Dam Hotel. He also was responsible for securing all of the sandstone bases for the art sculptures installed throughout the downtown area.

“He just called on all his professional and personal skills to see the job was done with elegance and done well,” Denman said.

His granddaughter Jennifer Zischke recalls that trains were always a big part of Burk’s life. She said that he had a train room behind their house and it was a “big deal” every year to see which of his grandchildren would get to operate the Christmas train. Before he became ill, he made sure that each grandchild was given a train.

Burk, born in Sturgis, South Dakota, graduated from high school when he was 16 years old. His first job was working in a sheet metal shop in Casper, Wyoming, where his family had moved to so he could work without violating child labor laws.

He married his wife, Darlene, in June 1951. They had four children.

In 1963, the Burks moved to Boulder City, where he began a career with Clark County School District. Burk started working in the facilities department and during the next 29 years advanced to the position of associate superintendent of facilities and transportation.

He oversaw school maintenance and construction and was especially proud that the district’s largest bond for school construction passed during his tenure. He retired in 1992.

In May 2001, he was recognized for his work at the district when a high school was named after him.

Burk is survived by his wife, Darlene; daughters Dianna Denman of Minnetonka, Minnesota; Karen Johnson of Las Vegas; Jackie Walker of Boulder City; and son Michael Burk of Longmont, Colorado; and four grandchildren and five great-grandchildren. He was preceded in death by a grandson.

A memorial service will be held at 1:30 p.m. Sept. 29 at the Boulder Creek Golf Club pavilion, 1501 Veterans Memorial Drive.