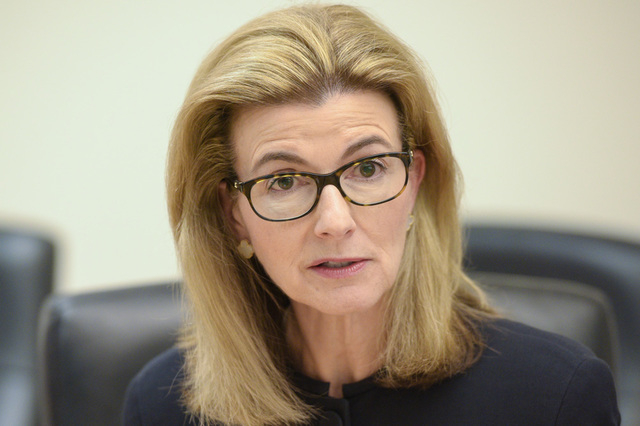 The longtime chief executive officer of St. Jude’s Ranch for Children resigned effective Thursday night, according to the organization’s national board.

Christine Spadafor’s resignation follows the departure of all Nevada national board members for St. Jude’s, which serves abused, neglected and homeless children. Four of five Nevada board members recently resigned, and the fifth left the board for another position on the organization’s foundation oversight board.

The announcement, made by the national board and Spadafor, comes less than a week after the Las Vegas Review-Journal published a story about her annual compensation, which includes a $300,000 salary, a $100,000 bonus and nearly $35,000 in reimbursable expenses for regular commutes between Boston and cities in Nevada and Texas where the nonprofit has campuses. The story also made public several allegations of mismanagement at the nonprofit operation.

Spadafor decided to leave St. Jude’s to pursue consulting work with other companies, the national board said in a statement. The board said it supported her 100 percent.

“The board engaged an independent third party to investigate complaints made by persons formerly associated with the Ranch. The investigation found no wrongdoing or improprieties,” the statement said. “Christine recognizes these complaints have created a distraction that is not in the best interest of the Ranch and the children, and so her decision is based solely on her concern for the organization.”

The questions and complaints from former employees arose six months ago and sparked turmoil, which included the resignations of trustees and employees and implementation of more stringent internal fiscal controls.

The complaints prompted the board to ask Greenberg Traurig, a Miami-based law firm with offices in Las Vegas, to independently review all corporate governance and general compliance. While “there were no findings of malfeasance,” the nonprofit board said it asked for “recommendations of procedures that could further the mission of St. Jude’s Ranch for Children, and will be implementing the recommendations in the coming months.”

The board would not release the findings of the investigation to the Review-Journal.

Spadafor in a statement said that since she began working with St. Jude’s in 2005, her top priority had been serving the needs of children. She said that priority never wavered, and her commitment to the mission of St. Jude’s remained steadfast throughout her eight years as the organization’s CEO.

“It has become apparent in recent weeks that attention focused on me has become a daily distraction threatening to compromise St. Jude’s Ranch efforts to fully serve the children in its care and advance its strategic vision,” she said in a statement. “I will not allow my detractors — persons formerly associated with the Ranch — to further destroy what so many dedicated employees, volunteers, donors and community supporters have worked so hard to build over the past 50 years.”

Spadafor, 59, a Harvard Law School graduate, is the president and sole employee of SpadaforClay Group Inc., which she started in 2004.

Since 2009 she also has been on the board of directors of Boyd Gaming Corp., which paid her $202,511 in compensation for the fiscal year that ended Dec. 31, 2013, according to the gaming company’s most recent annual report to regulators. Her compensation included $85,000 in fees earned or paid in cash, $112,504 in stock awards and $5,007 for a supplemental medical expense reimbursement plan.