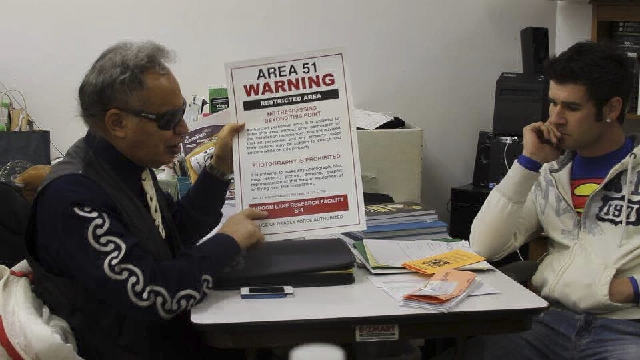 If you’re going to make a film in Southern Nevada about UFOs, it would be a good idea to seek out area experts.

Turns out, one lives right here in Boulder City.

When filmmaker Giovanni Sticco was a child, he witnessed four UFOs in his hometown of Los Angeles. These four separate encounters would go on to shape the rest of his life.

That was before it happened again, this time while he was living in Las Vegas.

“I saw a mothership land here in the southeast side of town five years ago,” said Sticco, who is a filmmaker.

Sticco has taken these experiences and funneled them into his latest project, “51,” a sci-fi UFO feature film told in the style of a documentary.

“When I decided to make this movie I wanted to venture into that kind of avenue that people are fascinated in,” Sticco said.

It was this fascination that led Sticco to Kae Pohe, owner of The Flying Saucer Area 52 store at 441 Nevada Way.

“Boulder City was a real cool place to film,” Sticco said. “We actually filmed an interview scene with Kae Pohe. He’s been dealing with this stuff a long time.”

Thirty-two years, according to Pohe.

Sticco shot it throughout Nevada, including Boulder City, to satisfy his drive to produce a film that was genuine to the story. To add to the movie’s authenticity, Sticco interviewed many extraterrestrial experts, including Pohe.

Pohe who is also the owner of the Hoover Dam gift shop, opened his alien-themed store in June 2011. The store on Nevada Way sells alien souvenirs, gifts and any other memorabilia for UFO believers and nonbelievers.

Sticco only found it natural that he would interview an expert such as Pohe for this movie.

Although Pohe is a local celebrity, the movie was not short on familiar faces. Reality TV star Daisy De La Hoya has a role in the film. De La Hoya is best known for VH1’s “Rock of Love” reality dating show.

“Daisy was very interesting and easy to work with,” said Sticco, who also contributed his acting chops to the film. “It was fun to see her breaking into film.”

“51” which took four months to film, a little longer than Sticco anticipated, will be getting it’s finishing touches this month and ready to be released as soon as Sticco can strike a good deal with the distribution company.

“We are going to try and turn this in to Sundance or Cannes and see what happens,” he said. “I am very happy with the way it turned out.”

Sticco is not anywhere near finished yet. He starts filming a Buddhism inspired movie called “A Taste of Freedom” that will shoot in Sri Lanka and Los Angeles.

“We need as many inspirational movies as we can out right now,” he said.