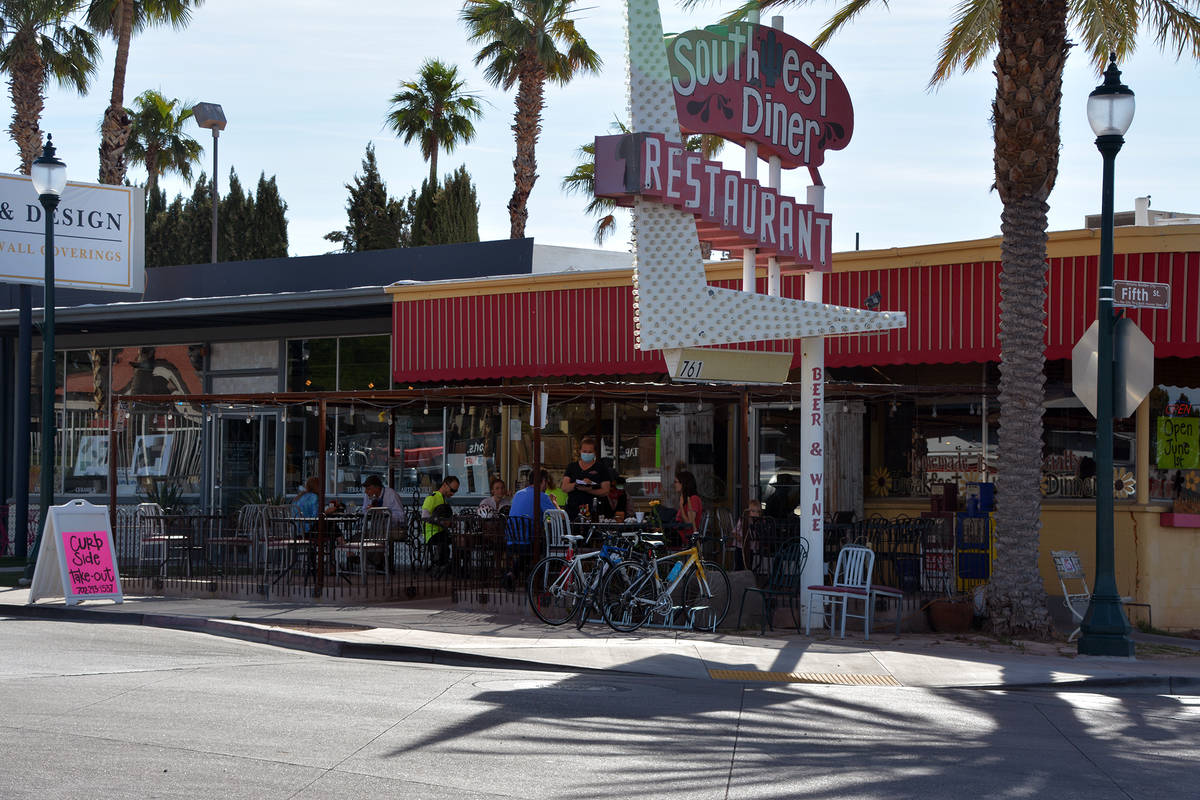 Southwest Diner is temporarily closed due to new restrictions forcing it to operate at 25 percent capacity. Owner Cindy Ford said the plan is to reopen right after Christmas.

On Sunday, Nov. 22, Sisolak announced a three-week “statewide pause” to help prevent the spread of COVID-19. Under it, restaurants can only operate at 25 percent capacity instead of 50 percent and customers must have a reservation. Additionally, no more than four people can be seated at one table.

Cindy Ford said she is temporarily closing her restaurant, Southwest Diner, because of these restrictions.

Ford said the current plan is to reopen right after Christmas.

World Famous Coffee Cup co-owner Terry Stevens said his family’s restaurant will stay open, but they are probably going to have to lay off some staff members.

“It’s like we just got our business back up from the previous shutdown, and then it goes back down,” he said. “It’s a bummer. The restaurant was doing well. … I feel bad for the girls I have with families and bills to pay.”

Stevens said the new restrictions are also causing a mental strain on everyone because of the uncertainty they bring.

“This isn’t healthy for us. … For me, trying to be positive about everything with everyone is tough,” he said.

Boulder City Co. Store owner Tara Bertoli said to deal with the new capacity requirements she is opening a drive-thru at the back of her building.

“I can only have 12 people total, outside and inside,” she said. “That’s terrible.”

Gyms, libraries, museums and other businesses also have to operate at a 25 percent capacity.

“The Boulder City Library is committed to the well-being of our staff and the community we serve as we make the decision to scale back services. … As of Monday, Nov. 30, in-building services will be restricted to computer access only with limited assistance on Mondays, 10-6; Wednesdays, 10-6; and Saturdays, 11-4. Computer sessions will be limited to 30 minutes with no extensions and masks remain required.”

Diehm also said all requests for library materials will be handled through the facility’s curbside service by calling 702-293-1281.

“Please do not come into the building to request or pick up items,” she said. “All returning items can be dropped in our drop box out front.”

Public gatherings have been reduced to 50 people instead of 250, or to 25 percent of capacity, whichever number is lower. Private gatherings are limited to 10 people “from no more than two households, whether indoors or outdoors,” Sisolak said.

This reduction in group size has caused the Nevada State Railroad Museum in Boulder City to extend the cancellation of its weekend train rides.

The rides had already been canceled through the end of November, but now it will go until this newest directive ends, according to Randy Hees, museum director.

“Our plans are to still have Santa, who had to postpone due to the governor’s order, and all the other activities,” said Dam. “Our new venue location had the area preparations completed … in the east part of the museum site between the … tracks.”

The city is also scaling back the public’s access to City Hall and limiting activities.

Starting Wednesday, Dec. 2, City Hall is closed to the public and all City Council, commission and committee meetings will be live-streamed only. No in-person attendance will be allowed.

According to the city, people can still use windows to conduct business and submit payments and permits as well as dropping off items at the front door security desk.

“We continue to take action to protect our businesses and residents and follow the guidance of the state and governor, who are working with top health officials and the Centers for Disease Control and Prevention,” said Mayor Kiernan McManus. “Many residents have utilized online services and drop-off locations since the start of this emergency. The steps that staff members are taking to protect our residents will not impact the excellent customer service that they provide.”

“Our biggest message is stay home,” added William Gray, emergency manager and fire chief. “Stop the spread. If you are healthy and capable, call, email or talk to your neighbors and make sure they have food and supplies, especially if they live alone or are elderly.”

In addition to the reduction in capacity for businesses, Sisolak also tightened the state’s mask mandate. According to him, masks must now be worn at all times “when you are around someone who is not part of your immediate household, whether indoors or outdoors.”