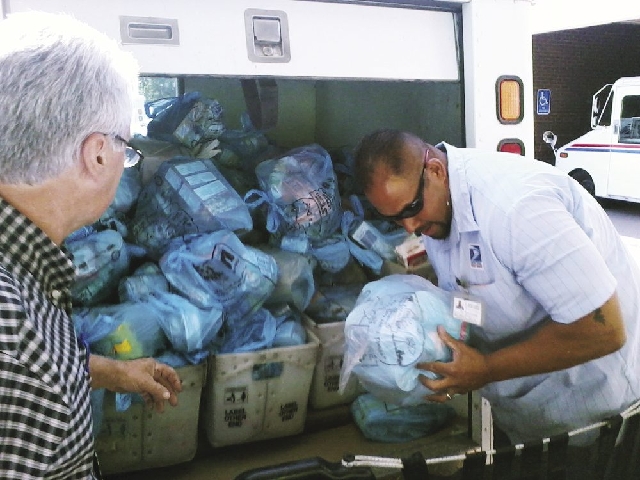 Boulder City will be part of the largest food drive in the country Saturday.

Every second Saturday in May, the Stamp Out Hunger food drive, hosted by the National Association of Letter Carriers, finds letter carriers across the country collecting food donations.

The donations go to various food banks in the regions where the food is picked up. In Boulder City, the entirety of the food donated will go to Emergency Aid of Boulder City.

“You don’t have to walk any farther than your mailbox to help someone who needs help,” said Glenn Norton, president of the Las Vegas NALC branch.

Sometime this week, special plastic bags from Albertsons grocery store, a local sponsor of the drive, will be delivered to the majority of the city’s residents, Norton said.

Then Saturday, residents are encouraged to place nonperishable food items in the bags, and place the bags by their mailboxes for a letter carrier to pick up and deliver to Emergency Aid.

“We’re really happy to do it,” Norton said. “The letter carriers love doing it. It’s a way to give back to the community.”

“It’s our biggest food drive of the year. We have many and I wouldn’t want to belittle the other ones, but this is certainly the biggest,” he said.

Norton said food raised in the Las Vegas area has increased since Albertsons became involved four years ago with customers having the opportunity to purchasing bags of food for donation at stores.

Albertsons’ customers also have the option of purchasing stamps, and the money is converted into food, Norton said.

“They are promoting it in their stores 10 or 12 days (prior to Saturday), and that really makes a difference,” Norton said.

Emergency Aid mostly needs cans of soup or tuna, and peanut butter and jelly. One thing they don’t need is bottled water.

“In the summertime the kids are out of school and we can’t get enough peanut butter and jelly,” Edwards said.

Emergency Aid may also be in need of volunteers to help unload and organize food on Saturday.

Stamp Out Hunger began 25 years ago in Phoenix, and is now the largest single-day food drive in the nation, Norton said.

It has existed in the Las Vegas area, including Boulder City, for 23 years, he said.