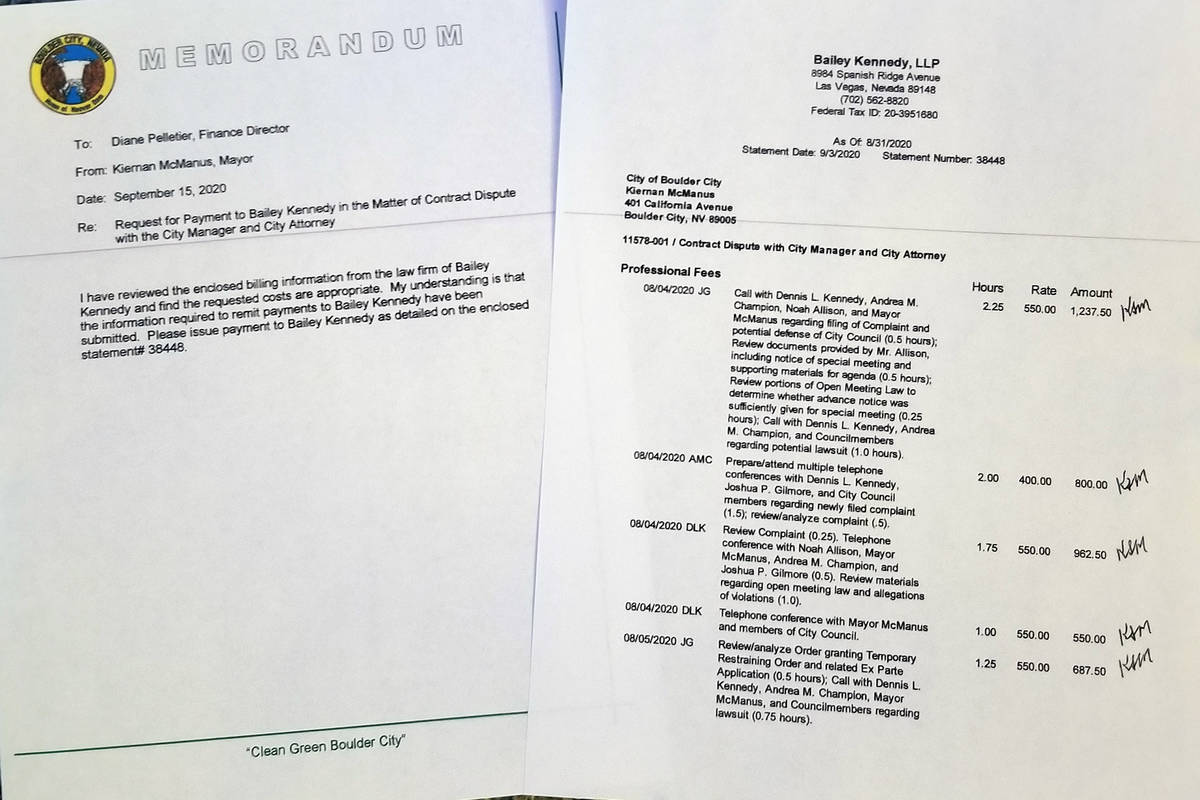 Celia Shortt Goodyear/Boulder City Review The city has spent almost $40,000 on its defense in a lawsuit brought against it by two employees, and it could spend more than double that amount when all is said and done.

Boulder City has spent almost $40,000 on its defense in a District Court case and could spend more than double that amount when all is said and done, according to court documents.

According to a Sept. 3 invoice submitted by Bailey Kennedy, the Las Vegas law firm representing the city in its defense against a lawsuit filed by City Attorney Steve Morris and City Manager Al Noyola, the city is being billed $36,906.06 for work done in August. Bailey Kennedy is also estimating the city’s total cost to be $100,000 by the end of the case.

City Council hired the Bailey Kennedy law firm in August to represent the city in the case filed in Nevada’s Eighth District Court. Morris and Noyola’s complaint alleges a special meeting to discuss terminating their employment contracts was because they substantiated a series of complaints made against Mayor Kiernan McManus, who was accused by various city employees of “religious discrimination, harassment, bullying and creating a hostile work environment.”

In a Sept. 15 memo to Finance Director Diane Pelletier, McManus said he had reviewed the invoice from Bailey Kennedy and found “the requested costs” to be “appropriate.”

He also asked her to issue the approximately $37,000 payment to the firm.

Morris and Noyola filed an amended complaint Aug. 25 accusing McManus and other council members of participating in a “serial communication with prospective legal counsel prior to their retention,” which they claim violates the open meeting law.

The work being billed includes six line items for three different attorneys’ time at two meetings with council members before the firm was hired Aug. 11 as well as numerous later ones. It also includes researching the case, drafting paperwork and meeting with the opposing counsel.

According to court documents filed in September, the city’s attorneys, Dennis L. Kennedy, Joshua P. Gilmore and Andrea M. Champion, wrote that scope of the litigation had grown with those new allegations and they estimated “that Boulder City will incur $100,000 in fees defending this action… .”

“Once the city could be heard (in District Court), the judge ruled the City Council could proceed with a special meeting to consider Mr. Morris’ and Mr. Noyola’s employment contracts, so long as they were provided with advance notice of the meeting,” he said. “Because Mr. Morris and Mr. Noyola continue to pursue their claims against the city — and certain of its councilmembers— in the lawsuit, and because they are actively attempting to avoid consideration of their employment contracts at a future meeting, the city continues to utilize Bailey Kennedy to handle the matter, including efforts to serve Mr. Morris and Mr. Noyola with notice of the rescheduled special meeting.”

He also said the reason the city had to hire Bailey Kennedy was because Morris had not designated “competent legal counsel to respond on behalf of the city” to the complaint.

The alleged open meeting law violations mentioned in Morris and Noyola’s complaint deal with an unofficial meeting between members of the council and attorneys with Bailey Kennedy.

McManus said he contacted the council members individually after the complaint was filed, asking them to contact him about an urgent matter. They ultimately scheduled a teleconference with the law firm to discuss the situation.

“Nevada’s open meeting law allows council to meet to receive legal advice,” he said. “It’s not restricted to anyone who is employed or under contract by the city.”

According to City Clerk Lorene Krumm, the Nevada attorney general’s office has published an opinion about that type of meeting and when it can occur.

“I am familiar with OMLO (Open Meeting Law Opinion) 2002-06 which discusses in order for the public body to be allowed to have a ‘non-meeting meeting’ the attorney must be employed or retained by the public body,” Krumm said.

On page six of that opinion, it says “a non-meeting for consideration of advice on pending litigation or through litigation” is only allowed “from an attorney already retained by a public body.”