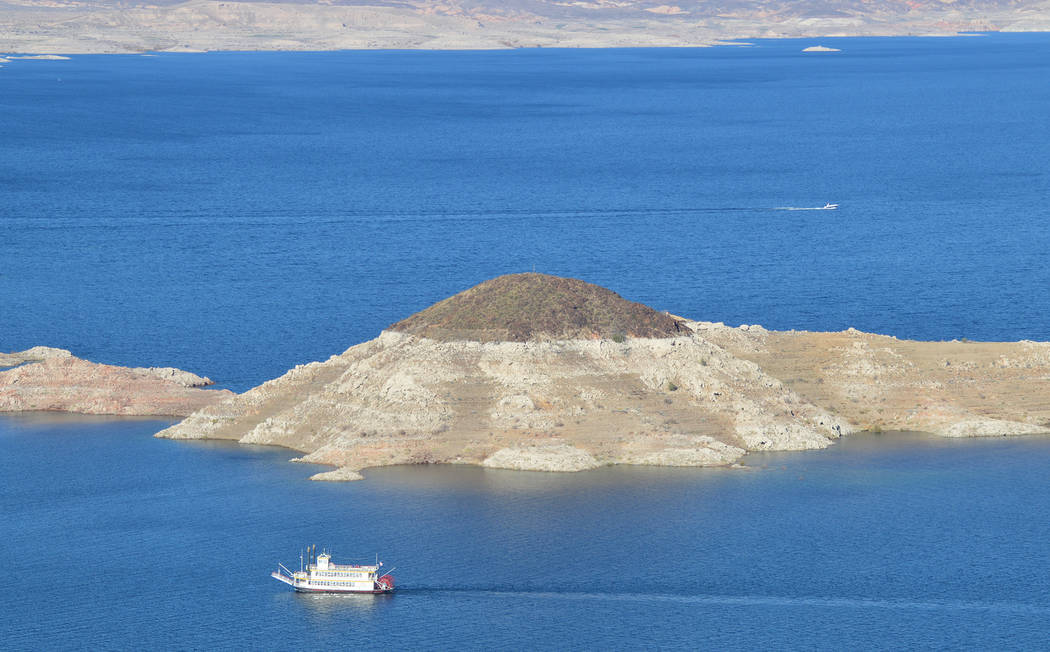 (Celia Shortt Goodyear/Boulder City Review) The water level at Lake Mead is projected to be at approximately 1,097 feet in the coming months, which is its highest level since 2014.

Lake Mead’s elevation is around 1,092 feet, which is the highest it has been since May 2014, but it is still only 42% full, said Patti Aaron, public affairs officer for the bureau’s Lower Colorado Basin Region.

“Drought isn’t determined by the amount of water in Lake Mead,” Aaron said. “We would need to see at least two to three back-to-back years of above-average hydrology, hopefully more, to say we are out of the drought. There isn’t a set definition of when drought ends.”

There have not been two back-to-back good years since the late 1990s.

Aaron said the higher water levels are due to a wet November and December, causing an above-average inflow into the lake.

“Regarding the rising lake levels, this is part of the normal seasonal trend in which cooler weather reduces water orders from Lake Mead,” she said.

She added that the water level will decline by nearly 20 feet in the spring and summer because water orders will increase before the elevation rebounds later in the year.

The higher water levels are also due to conservation by the lower basin states and Mexico. The Lower Basin Drought Contingency Plan, which took effect on Jan. 1, requires water savings contributions by the United States and Mexico.

“Since 2007, voluntary conservation activities undertaken by both countries have added about 35 feet to Lake Mead’s elevation, effectively keeping the Lower Basin out of a shortage condition for the past five years, 2016 through 2020,” she said.

The increased water in Lake Mead will affect recreation in the national park.

“At Lake Mead, our priority is to provide safe access to the lake, no matter the elevation. … The 6-foot rise will cover about a football-field length of shoreline with water,” said Christie Vanover, public affairs officer for Lake Mead National Recreation Area. “As the water rises, our … maintenance crews adjust floating facilities, such as courtesy docks and fishing piers. They also move portable facilities at beaches like restrooms and signs.”

Moving the facilities is an ongoing process and part of the park’s routine operating budget, she said. Additional costs are typically incurred only when water levels decline because concrete and utilities have to be extended.

Vanover encouraged visitors to be cautious when on the lake because it changes constantly.

“While our team does its best to mark hazards, the lake is very large so we can’t get every one,” she said. “As always, when people boat on the lake, they should treat their adventure like it’s their first.”