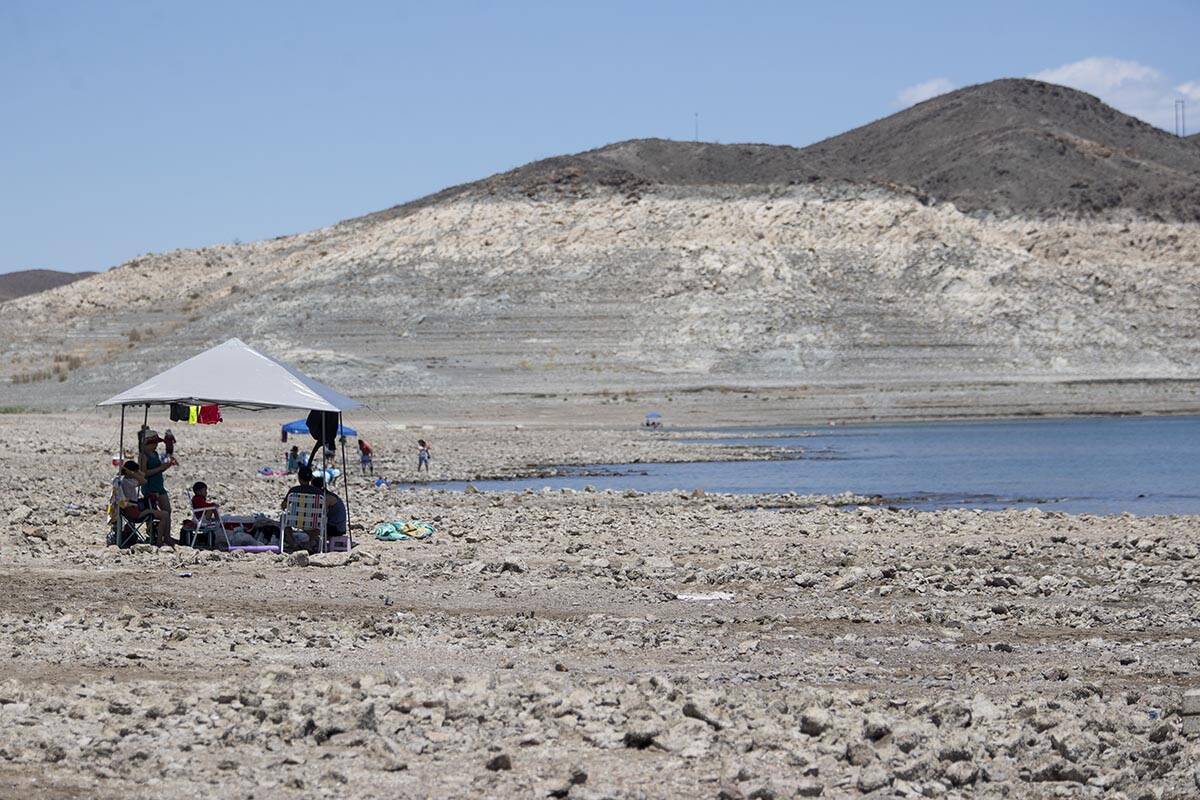 (Erik Verduzco/Las Vegas Review-Journal) The bathtub ring and shoreline at Lake Mead, as seen May 30, grow more prominent daily as the water level continues to decline and hit historic lows.

Lake Mead now sits just 29 percent full, dropping below 30 percent for the first time since the reservoir was initially filled more than 80 years ago, according to the most recent weekly report released earlier this month by the U.S. Bureau of Reclamation.

“We have been planning for this and preparing for this potential for more than two decades,” said Bronson Mack, spokesman for the Southern Nevada Water Authority. “We anticipate that Lake Mead’s water level is going to continue to decline as a result of drought and climate change conditions. But this further emphasizes the seriousness of this issue. And it does serve as a very stark reminder that we all need to conserve the water that we use outdoors.”

Lake Mead’s continued drop is not a surprise. Beyond the rising temperatures and dwindling water supply in the Colorado River, the Bureau of Reclamation recently implemented a plan to hold back 480,000 acre-feet of water in Lake Powell that would normally be released downstream and to Lake Mead, a measure taken to ensure that Glen Canyon Dam can continue to generate electricity amid what the Department of Interior has said are the driest conditions in the American West in more than 1,200 years.

The lake’s levels have fallen steadily for years, and estimates from the Bureau of Reclamation show no sign of that trend stopping anytime soon. Lake Mead sits at an elevation of 1,045.4 feet. That’s more than 40 feet lower than the 1,087.1 feet elevation the lake was at just two years ago in June 2020. The latest two-year projection from the federal agency shows that the lake could drop as low as 1,020 feet within the next two years.

In December, water agencies in Nevada, California and Arizona joined the bureau in signing the so-called “500+ plan,” a new effort to buoy Lake Mead’s elevation by about 16 feet over the next two years.

Last month, the water dropped far enough to expose the first intake straw for the first time in the lake’s history, and the water authority moved to activate its newest low-lake-level pumping station that pulls water from near the bottom of the reservoir.

But Southern Nevada’s water supply shouldn’t be affected anytime soon even as the lake continues to shrink, as that low-level pumping station is able to send water to the valley even if the reservoir shrinks another 150 feet to its “dead pool,” the point at which Hoover Dam would be unable to release water downstream.

Southern Nevada has also become more adept at conserving water over the years. Since 1999, the authority has been paying residents who convert their lawns to desert landscaping, and more recently it made a successful push for a new law that requires the removal of nearly one-third of all grass in Southern Nevada by making it illegal to use Colorado River water to irrigate “nonfunctional turf” starting in 2027.

“We are providing less water to more people today than we did 20 years ago,” Mack said. “That’s because of conservation.”