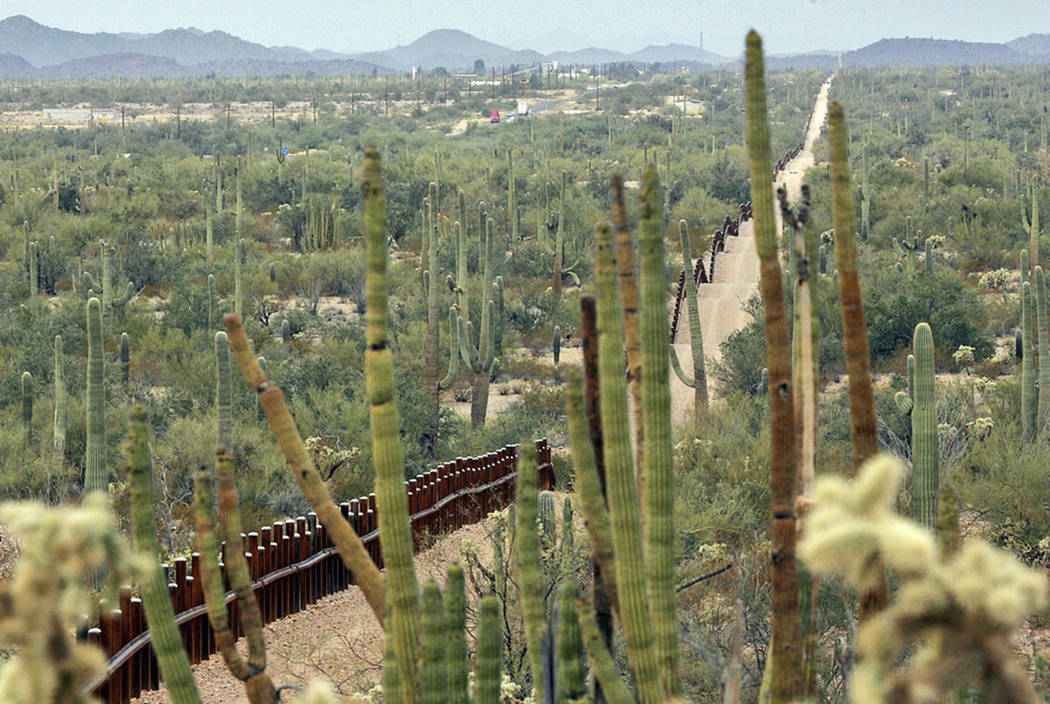 (File) A fence separating Organ Pipe Cactus National Monument, right, and Sonyota, Mexico, is seen running through Lukeville, Arizona, in 2006. Rangers from Death Valley National Park, Lake Mead National Recreation Area and Desert National Wildlife Refuge have been sent to three-week deployments at the park and others along the border with Mexico.

Several park rangers who normally patrol public land near Boulder City and Las Vegas have been dispatched to the U.S.-Mexico border in recent months under a surge program adopted by the Trump administration last year.

Local officials from the National Park Service and the U.S. Fish and Wildlife Service confirmed the temporary assignments but declined to specify how many officers were sent or exactly where and when the deployments occurred.

“I am unable to provide details on ongoing law enforcement operations but can confirm that law enforcement rangers from Lake Mead National Recreation Area have been deployed to support border security operations,” said Lake Mead spokeswoman Chelsea Kennedy in an email.

Death Valley spokeswoman Abby Wines said rangers from the park 100 miles west of Las Vegas were sent to Organ Pipe Cactus National Monument in Arizona and other park service sites along the border. “It’s happened a few times in the past year, one ranger at a time,” Wines said by email.

No local law enforcement officers from the Bureau of Land Management have been deployed to the border, according to John Asselin, the bureau’s spokesman in Southern Nevada.

The pilot program was launched in May 2018 by then-Interior Secretary Ryan Zinke, who ordered the deployments as part of stepped-up enforcement with the U.S. Border Patrol. According to the department, this marks the first time the Interior’s roughly 4,000 law enforcement officers have been used for border security.

During the first six months of the surge, Interior officials said, its officers apprehended more than 4,000 border crossers and seized 2,356 pounds of drugs.

But critics of the program have dismissed it as political theater and argued that rangers should be patrolling their understaffed parks, not handling immigration duties that are outside their mission and their training.

“Nevada cannot afford to lose critical law enforcement officers, who are being taken away from their duties to fill immigration enforcement roles they are not trained to perform,” said Rep. Steven Horsford, D-Nev., who serves on the House Natural Resources Committee. “The Department of the Interior must focus on the many challenges public lands face in Nevada and continue its work to protect wildlife and habitat across the West — especially since this is what American taxpayers pay the agency to do.”

The U.S. Park Police Fraternal Order of Police declined to comment for this story, but the organization’s website includes repeated references to “dangerous understaffing” in the law enforcement ranks at the nation’s parks.

The Fish and Wildlife Service has two full-time law enforcement officers to patrol the entire Desert National Wildlife Refuge complex, which includes four refuges and 1.6 million acres of public land scattered across a 180-mile swath of Southern Nevada. Dan Balduini, spokesman for the refuge complex, said both of those officers have been deployed to Cabeza Prieta National Wildlife Refuge in southwestern Arizona as part of the surge.

“Obviously, they didn’t go at the same time. We had to maintain some coverage,” Balduini said.

He declined to identify the officers or make them available for interviews. He said they probably wouldn’t have much to say anyway because the officers are not supposed to discuss the “tactical or operational details” from their time at the border.

“They said there wasn’t much happening. That’s about all the detail I can give you,” Balduini said.