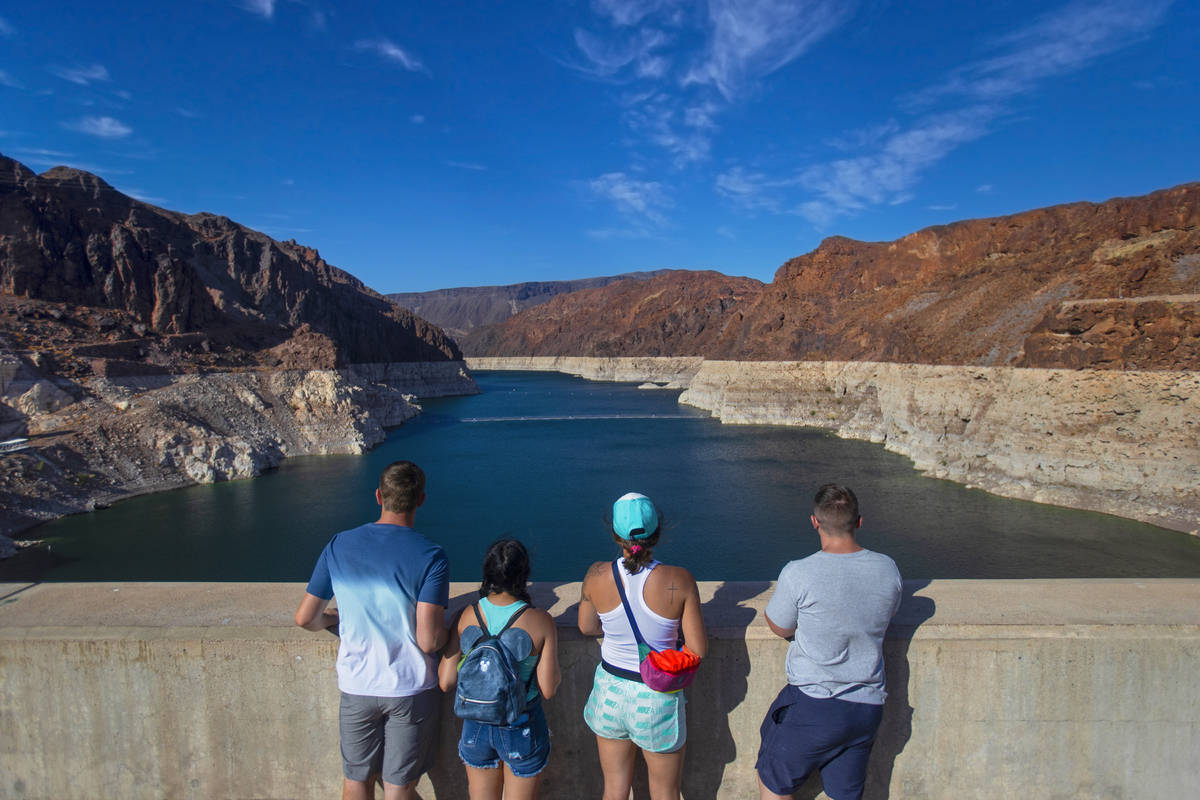 (Benjamin Hager/Las Vegas Review-Journal) Tourists look out at Lake Mead from the top of the Hoover Dam on Tuesday, June 8. It is projected to reach its lowest level since 2016 today, June 10. 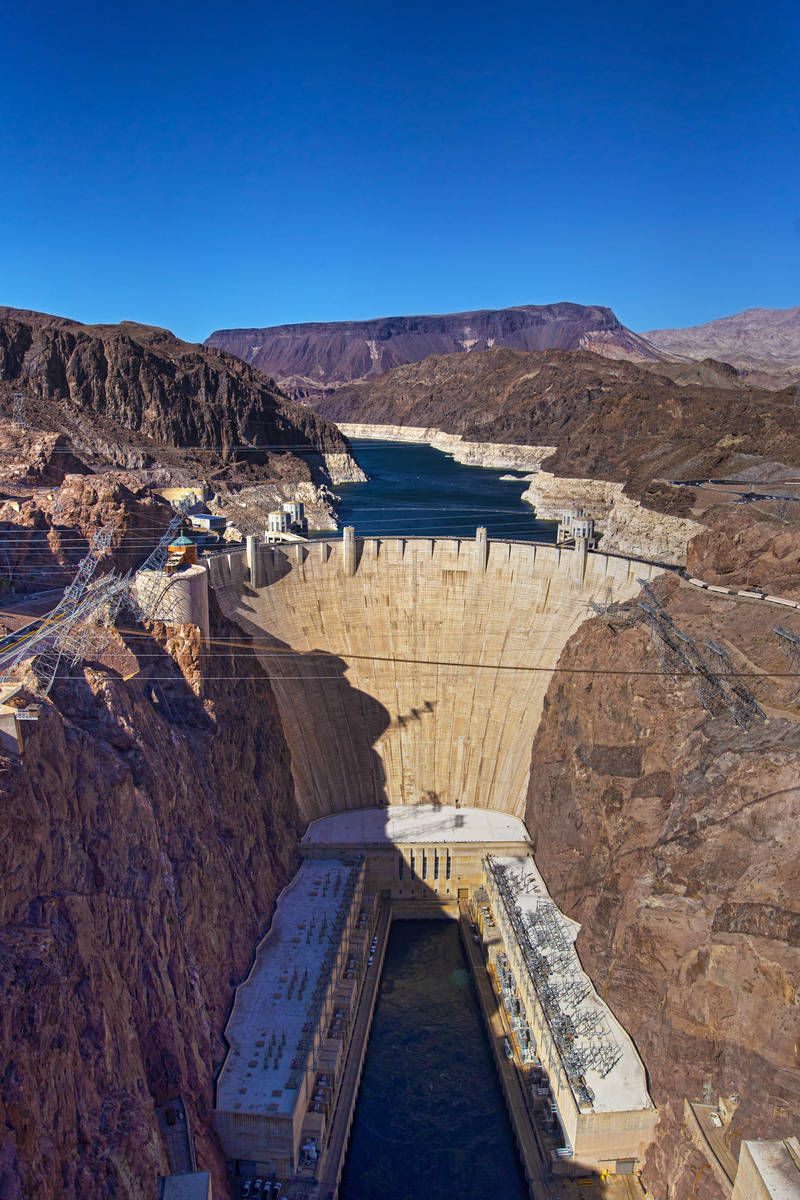 And the lake level decline isn’t projected to stop there.

“We expect it to keep declining until November,” Aaron said.

Lake Mead is barreling toward its first federally declared water shortage, a product of a decades-long drought that has left the Colorado River parched. About 90 percent of Southern Nevada’s water comes from Lake Mead.

A shortage declaration would be made if the Bureau of Reclamation water level projections in August show the lake level below 1,075 feet at the beginning of next year.

Under a shortage, Nevada would have its annual 300,000 acre-foot allocation of water from the river slashed by 13,000 feet. That reduction would come in addition to an 8,000 acre-foot contribution Nevada agreed to in 2019 in the event Lake Mead’s water level dropped below 1,090 feet, as it has.

One acre-foot of water is about what two area homes use over the course of 16 months.

Even if the state’s allocation is cut, Southern Nevada wouldn’t immediately feel the squeeze. Last year, the region used 256,000 acre feet, and the Southern Nevada Water Authority has about eight years worth of water at that rate of usage stored in Arizona, California, Lake Mead and Las Vegas’ aquifer.

This year, the Colorado River Basin is projected to experience its second-driest year in more than a century of record keeping. The driest year on record was 2002.

A smaller snowpack in the Rocky Mountains has led to decreased inflow into Lake Mead this year, according to Aaron.

“The runoff is essentially over now,” she said. This year’s runoff, she said, was 31 percent of average.

According to the Bureau of Reclamation, the dam’s power plant is capable of producing about 2,080 megawatts. Aaron said the current capacity is 1,567 megawatts, enough to power about 350,000 homes.

“When the lake level is high, there’s more pressure on the water that’s being pushed into the turbines,” Aaron said. “And with less pressure, they have to work harder, so they aren’t quite as efficient.”

Each foot in elevation that the lake level decreases, Aaron said, the dam loses about 6 megawatts of capacity. The lowest water level that allows the dam to continue generating power is 950 feet.

“But we are not in danger of hitting that point,” Aaron said.

Water officials in Southern Nevada have said they have long prepared for a shrinking Lake Mead through conservation.

“The historic low level anticipated on Lake Mead is concerning for all of us who live in the region and love the lake. The City Council, during a joint meeting with the Utility Advisory Committee, directed the committee to explore water conservation recommendations in the upcoming year,” said Lisa LaPlante, Boulder City’s communications manager. “The city staff regularly looks at ways to reduce water use and has moved in the past decade to using desert landscaping in many areas where grass once grew.”

“Those actions will make a tremendous impact on the future,” he said.

Under a bill signed into law Friday, June 4, by Gov. Steve Sisolak, nearly one-third of all of the grass in Southern Nevada will need to be removed by the end of 2026.

The law will prohibit Colorado River water distributed by the water authority from being used to irrigate “nonfunctional turf” starting Jan. 1, 2027. The authority has said this will include grass between roads and sidewalks, in medians and traffic circles and decorative grass outside businesses, housing developments and similar areas. Single-family homes, golf courses and parks are excluded from the ban.

The water authority estimates that the turf-removal measure will save about 10 percent of the area’s Colorado River allocation, about 30,000 acre-feet.

The lower water levels are already affecting recreational opportunities at Lake Mead but shouldn’t change how many people visit each year, according to the National Park Service.

Greg Hauburger, who works in the park’s public affairs office, said one of the most immediate ways recreation will be affected are the temporary closures and delays at Lake Mead’s boat launch ramps as work continues to extend and maintain them.

“We’re asking visitors to pack their patience and plan ahead by checking our website at “Current Conditions at Lake Mead & Lake Mohave” for the latest conditions as our maintenance crews work to extend launch ramps using pipe mat and maintain them by removing built-up sediment and hazards such as rocks from the ramps. The lowering lake levels will also provide some new coves for kayakers and paddle boarders to explore.”

Last year, Lake Mead saw more than 8 million visitors and Hauburger said they anticipate this year’s numbers to be similar.