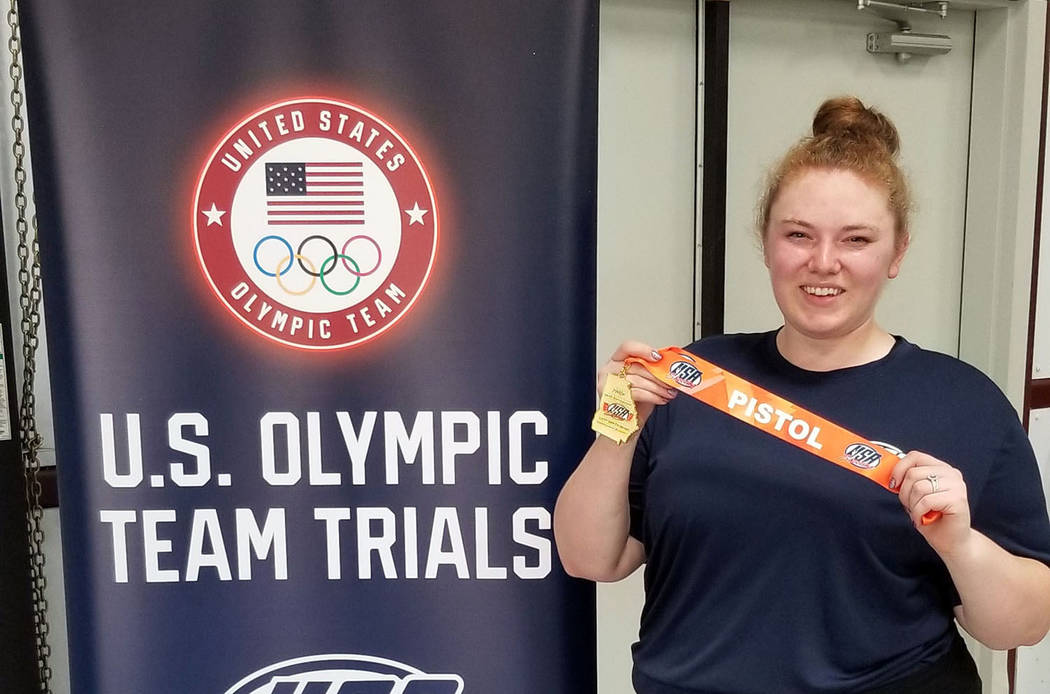 Lexi Lagan Alexis "Lexi" Lagan came in first place in women's sport pistol at the phase one competition of the Olympic trials in Fort Benning, Georgia, from Sept. 30 to Oct. 4. Phase two takes place in February.

Lexi Lagan Alexis "Lexi" Lagan, left, competes in phase one of the Olympic trials for women's sport pistol. Lagan came in first place in the competition. 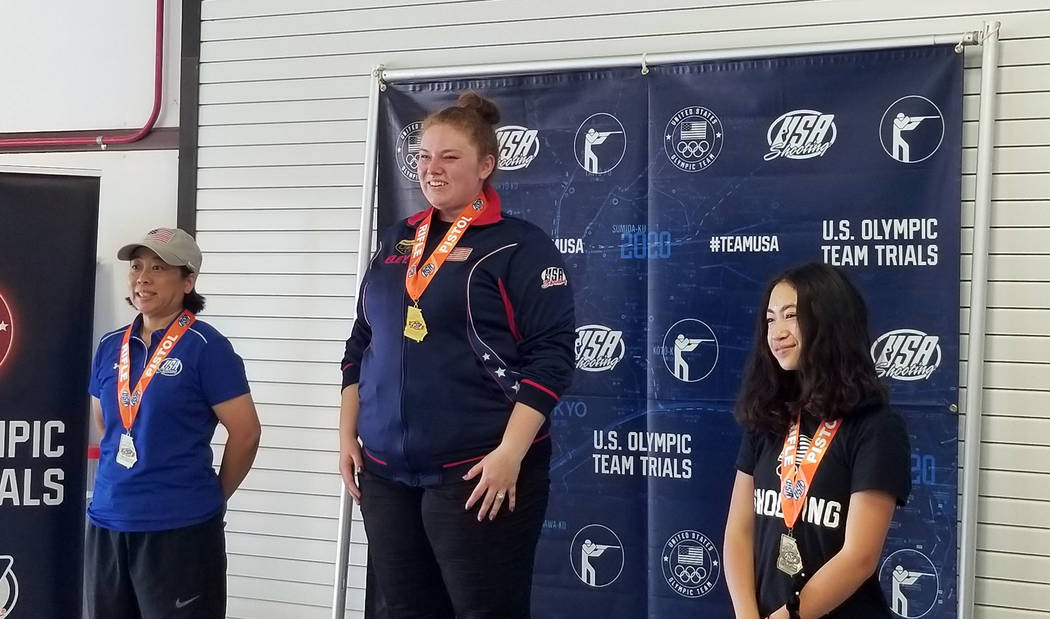 Lexi Lagan Alexis "Lexi" Lagan, middle, won first place in phase one of the Olympic trials from Sept. 30 to Oct. 4 in Fort Benning, Georgia. She will compete in phase two in February along Sandra Uptagraft, left, and Ada Korkhin.

Boulder City’s Alexis “Lexi” Lagan is one competition away from qualifying for the 2020 Olympics and on the verge of making history in women’s sport pistol.

“I just need to maintain my lead from the recent competition,” said Lagan, who came in first in phase one of the Olympic trials, finishing nine points ahead of second-place finisher and 2012 Olympian Sandra Uptagrafft.

If Lagan wins a medal at the 2020 games, it would be the first earned by a U.S. athlete in women’s sport pistol since the 1984 Olympics, when Ruby Fox earned a silver medal in the women’s 25-meter pistol competition.

Lagan, who didn’t start competing until college, credits one of her coaches, Elizabeth “Libby” Callahan, with helping her to stay in the sport after she fell short of qualifying for the 2016 Olympics in Rio de Janeiro. Lagan said she wasn’t sure whether to continue to shoot or start a career in law. Callahan told her she had a “real shot” at a medal, so she decided to stay with it and moved to Colorado Springs, Colorado, in 2017 to train for the Olympics after graduating from the University of Utah.

“I had zero idea Lex would ever get involved with the shooting team at the University of Utah,” said her mom, Jill Rowland-Lagan. “I assumed she’d join choir or drama club. But as she seemed to be a natural at having the patience at precision, her path was obvious. Her understanding of the science involved in ballistics really seemed to give her an edge. Soon, it was more of a real passion that drove her.”

Lagan said her current coach, Jason Turner, is a big part of her competing internationally as well as helping her with life things like finding an apartment and a job when she moved to Colorado.

“He’s really been an outstanding guide and light. … I think that coach really helped me get here, to leading consistently the national group of women in pistol by several points,” she said.

To prepare for phase two and ultimately the Olympics, Lagan trains five days a week, with three hours a day spent at the gun range. She spends an hour working out at the gym and an hour meditating or studying.

In addition to her coach’s support, Lagan said she is supported by her family, which includes her husband, Jacob Peterson; parents, Jill and Barry; and sister, Abbi.

“I really perform a lot better when a family member is there. … They are there and focused with me,” she said about her competitions.

Lagan said that if she does make it to Tokyo in 2020, she will look forward to the “entire Olympic experience,” which only a few people get to have. Additionally, she said she wants to set a standard for those athletes who start competing later in life.

“I didn’t know about Olympic shooting sports until college. … You can come from any background and be present and be one of the few to compete at this level,” she said.

To help pay for the traveling and training expenses for the Olympic trials and the games, Lagan created a GoFundMe account as well as a website, https://teamlagan.com, to update people on her progress.