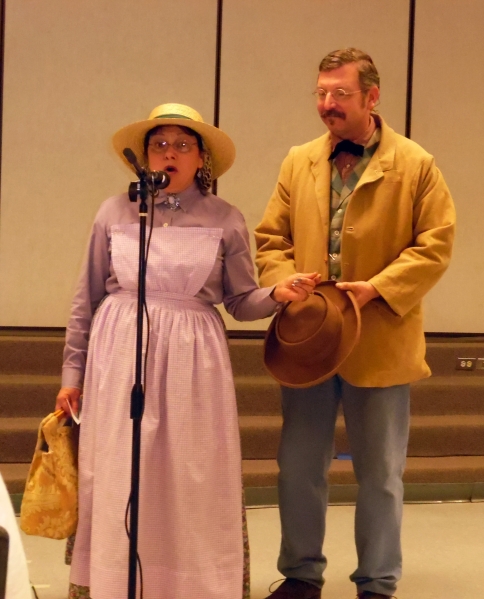 After a heated skirmish, the battle will go on.

Anthony Gelsone, principal of King Elementary School, said staff has decided to present this year’s Civil War re-enactment, though the date may be changed to alleviate any conflicts with standardized testing.

“Based on the input from the meeting, the Civil War will be going on,” he said.

About 100 parents, students and community members attended Tuesday’s meeting to discuss the possibility of canceling the fifth-graders’ 30th annual re-enactment, which was scheduled for April 29.

Out of the 15 people who addressed Clark County School District personnel and those assembled, 14 were overwhelmingly in favor of carrying on the tradition.

They unanimously said it was unfair to the children, who have been preparing all year for the re-enactment.

“This sounds like a done deal,” an emotional Patrick Kelso told school administrators, criticizing the 3:30 p.m. meeting time knowing that many parents work. “This is precedent setting. If you do something like this, you begin to take away so many things because they don’t fit in a box.”

He also asked why there wasn’t a list for volunteers to sign up help with the annual re-enactment.

“I’m sorry the conversation didn’t start there before it got here.”

Kelso said his 21-year-old son participated in the Civil War when he was a fifth-grader.

“I remember how excited he was and what he was learning. There are very few things that you take with you from elementary school, but this you do.”

Marti and Mike Barth, who came to the meeting dressed in period costume, also expressed their love for the annual program and how they have enjoyed working with the students.

Marti Barth said she used to hate history and think it was boring until her husband introduced her to historical re-enactments. Now, they travel to key historical sites throughout the nation on a regular basis.

“Don’t take this away from the kids. This is how they learn history; they don’t learn from a book.”

Mike Barth agreed, saying that until he actually began participating in Civil War re-enactments about six years ago he didn’t fully grasp its implications and affect on the nation.

He said he could see something switch on in the kids, adding that they enveloped their roles as Union and Confederate soldiers so well they wouldn’t even talk to classmates if they were on the opposing side for the annual battle.

Parent and Garrett Junior High teacher Brian Lemmel, who was in event founder Clare Tobler’s first fifth grade class at the school, said that although he supports and understands the teachers’ position regarding how time consuming the event is and that it doesn’t follow standard curriculum for that grade, canceling it now and in this fashion would be hypocritical to the principles the students try to achieve each day and see written on the wall in the school’s multipurpose room.

The lone dissenter speaking at the meeting was King physical education teacher Sara Fisher, who said she understands the parents and students’ position, but sees the time constraints the event places on her co-workers to do their jobs.

Grant Hanevold, assistant chief student achievement officer for the district, started the meeting explaining the purpose of the gathering and offering the reasons why or why not the Civil War should be discontinued.

“The decision to be made will be in the best interest of the students.”

He said the community input meeting was not intended to be a debate, but was to help staff decided what could, should or will happen.

“King has the responsibility to educate your children and with that comes accountability,” said Hanevold, explaining that he also understands what it means to be part of a small community since he served as principal of Moapa Valley High School for eight years.

He told those present that the primary reasons for possibly discontinuing the annual event was because it was “not aligned to Nevada Content Standards,” which are used to evaluate teachers’ performances and place students in future classrooms; was planned to take place in the two weeks immediately prior to testing; and was extremely time consuming for teachers, who put in hours of time off the clock to organize the battle.

The three reasons he provided for keeping the annual event were that discontinuing it now was “not a nice thing to do to the kids;” it would be hard to call family members who made plans to travel from other locations to attend; and it was tradition.

Although they gave no timeline to consider the the community’s input and make a decision about the event, Gelsone called the Boulder City Review less than two hours after the meeting concluded to say it would be held this year.