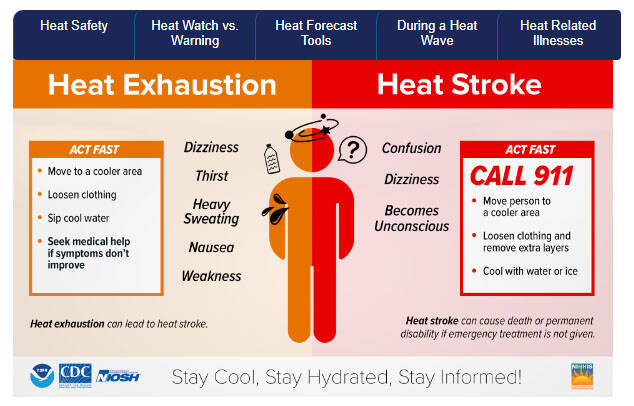 It’s mid-July, and thermometers in the Southern Nevada area are rarely dropping below triple digits.

If any more proof were needed, the National Weather Service has issued an excessive heat warning for the area from 11 a.m. today until 8 p.m. Friday. Temperatures ranging from 115 to 120 degrees are forecast.

According to the Weather Service, overnight lows will struggle to fall below 85 degrees and when compounded with above-average afternoon temperatures will pose a significant risk for heat-related illness.

While many Boulder City veterans are used to this, adapting to the weather can be troublesome for those who are new or visiting the community. Here are some tips and tricks to stay cool and safe this summer.

It may go without saying, but staying hydrated is essential no matter where you live. Utilize shade, wear loose clothing, and reduce or eliminate your caffeine intake. If you plan on being outdoors for an extended period, try to do so in the early morning or evenings, and also make sure you take frequent breaks indoors or in a shaded area to cool down, according to the National Weather Service and the Occupational Safety and Health Administration.

Summer also brings tourists to Boulder City who look to see as much of the town as possible. But learning to be patient and restrained is key. Don’t overdo it and wear yourself out. Boulder City has many sights to see, but some are better off viewed in the fall or winter when it’s cooler.

The Boulder City Fire Department has had four heat-related calls in the past month. None have resulted in a heat stroke.

“We are in the peak of our heat season. The biggest thing is to stay cool and to stay hydrated,” said Boulder City Fire Chief Will Gray.

Anyone overcome by heat should be moved to a cool and shaded location.

Another key thing to remember in the heat is that these temperatures affect everybody, no matter what part of the animal kingdom they come from. Make sure you keep your pets cool and hydrated, too, whether it be dogs, cats, birds or even reptiles.

In 2021, Lily’s Law was passed that requires pet owners to implement cooling devices for outdoor pets when temperatures rise above 105 degrees.

“Quite often, people forget about their pets. But they are just like kids in that you can’t leave them alone in a locked hot car and things like that,” said Gray.

In issuing its excessive heat warning, the National Weather Service states that car interiors can reach lethal temperatures in a matter of minutes during times of extreme heat.