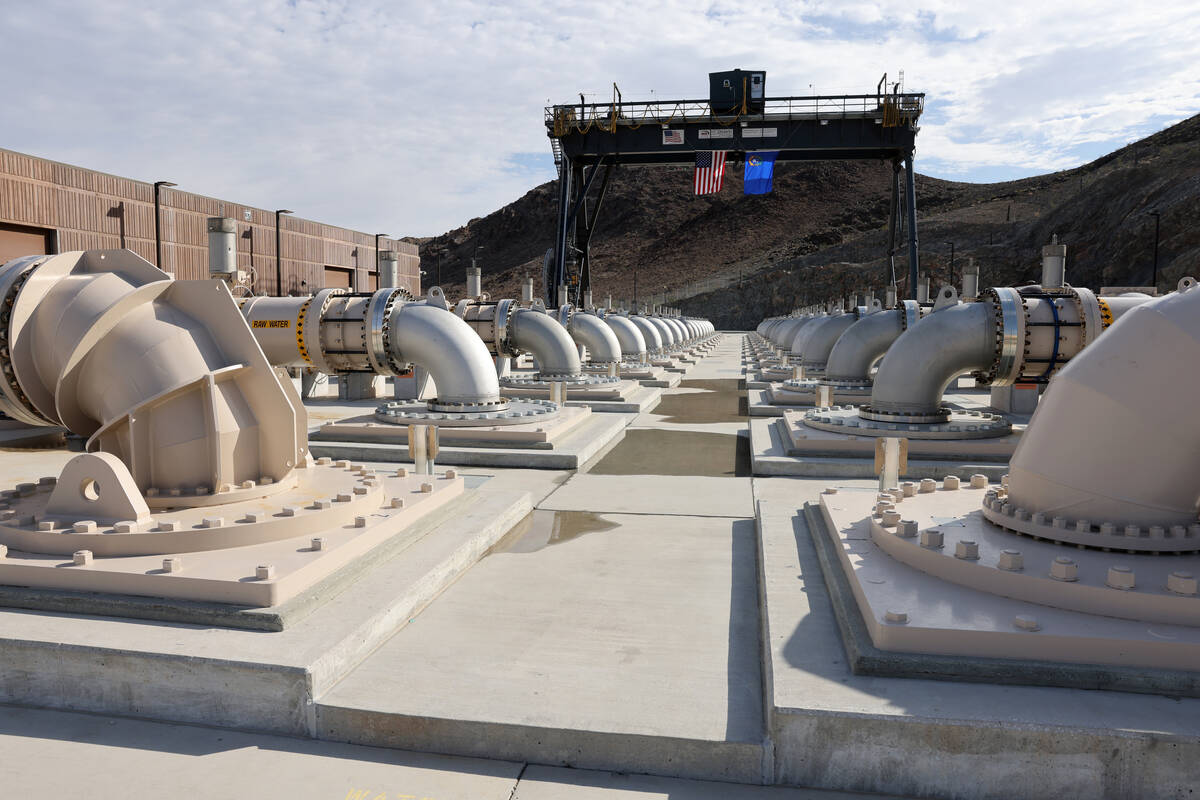 (K.M. Cannon/Las Vegas Review-Journal) As the drought continues to ravage the West, water managers in Nevada, Southern California and Colorado have announced an agreement to expand conservation efforts and reduce demand. Because of declining water levels in Lake Mead, the Southern Nevada Water Authority has put its new low-lake-level pumping station, seen Wednesday, Aug. 24, into use.

The efforts come in response to drought and chronic overuse that have left less water in the river and sent the nation’s two largest reservoirs to historically low levels.

Under a memorandum of understanding, water managers in Nevada, Southern California and Colorado said they will work to expand programs to increase outdoor water efficiency, replace nonfunctional turf with drought- and climate-resilient landscaping and increase water recycling programs.

Those ideas, which Nevada water managers have pursued for years, are starting to spread to other areas as the severity of the ongoing drought becomes clear to Colorado River water users.

Those signed onto the commitment include the Southern Nevada Water Authority, the Metropolitan Water District of Southern California and three water providers in Colorado: Aurora Water, Denver Water and the Southeastern Water Conservation District.

“Our organizations recognize our role in the effort to reduce demands in the Colorado River basin. We come together from across the basin to pledge our commitment to continued water conservation, to reducing our demands for water, and to expanding our efforts to reuse and recycle our water supplies,” representatives from the water suppliers wrote in a letter that was sent to Bureau of Reclamation Commissioner Camille Touton.

“While we have significantly reduced demands since the onset of the drought, there is more we can and must accomplish.”

The commitment from the urban jurisdictions comes after the seven Colorado River basin states missed a deadline earlier in the month to propose Colorado River water use cuts of 15 percent and 30 percent that Bureau of Reclamation officials say are needed in order to keep water levels at Lake Mead and Lake Powell from plummeting to levels that could jeopardize hydropower and water supply downstream of Hoover Dam.

The five jurisdictions have collectively reduced annual water use by 1.15 million acre-feet since 2000, according to the agreement. The providers noted in their letter to Touton that while municipal water use represents a small portion of the water consumption on the river, they hope their commitments can spur other water users to take action.

Agriculture accounts for roughly 80 percent of the water use along the Colorado River.

“With climate change and aridification affecting the entire Basin, improving the health of the Colorado River system requires a swift and collective effort of all water users — in all sectors — to reduce water use and implement actionable strategies, policies and programs to protect this vital resource and balance water supplies with demands,” Southern Nevada Water Authority General Manager John Entsminger said in a written statement.