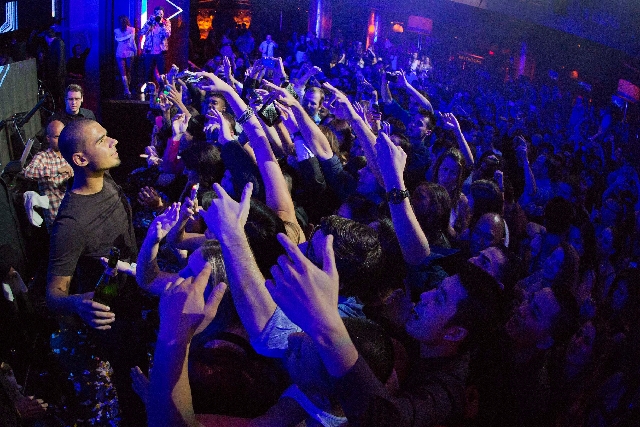 Imagine this. You’re standing at the corner of Tropicana Avenue and Las Vegas Boulevard.

It’s Saturday night, and you want to go to a club. It’s your only night in town and you don’t want to waste a precious moment of your time, so you grab your phone and fire up an app.

Using augmented reality, you virtually view all the clubs nearby. The app can show you which ones are hot tonight and which ones aren’t. Do you prefer a packed dance floor or a little more room? Is the celebrity appearance going well or did the host just throw a wave to the crowd and disappear?

With the new app, mynightCap, this now can be your reality, augmented or not.

“There’s a big void in finding out which clubs are hot and current on a nightly basis,” co-founder Rene Durruthy said.

Review sites provide customers’ past experiences, but users aren’t able to tell what a club is like when it counts. The new app features Las Vegas, Los Angeles, San Francisco and San Diego.

There’s also a social networking aspect to the app via a photo recap slideshow, aptly titled Hangover, that uploads automatically the next day. Now your “entourage” can see what you want them to see from the night before — no extra steps required.

“It’s a fun way of seeing what’s going on with everyone else the next morning,” Durruthy said.

Las Vegas resident Durruthy co-founded the app with his Los Angeles-based partner Emeka Orjiakor, and it took about a year to get it on the iPhone AppStore. When he’s not doing the tech thing, Durruthy is a full-time director of marketing for JFK Cos., promoting businesses such as Greens & Proteins and Trim Body Nevada.

Durruthy and Orjiakor met in college while roommates at the University of California, Santa Barbara. During that time the two organized parties and edged their way into the promotions space.

“It made sense for us to get together on this,” Durruthy said.

The duo is in talks with Vegas VIP tour companies and has been reaching out to club management companies to get the app on the radar of people who make the industry move. Once more connections are made, Durruthy said he’s confident his app will take off.

“It’s just a matter of putting that into motion,” Durruthy said.

Thus far mynightcap has been downloaded about 800 times.

“People are actually using it, I think,” Durruthy said.