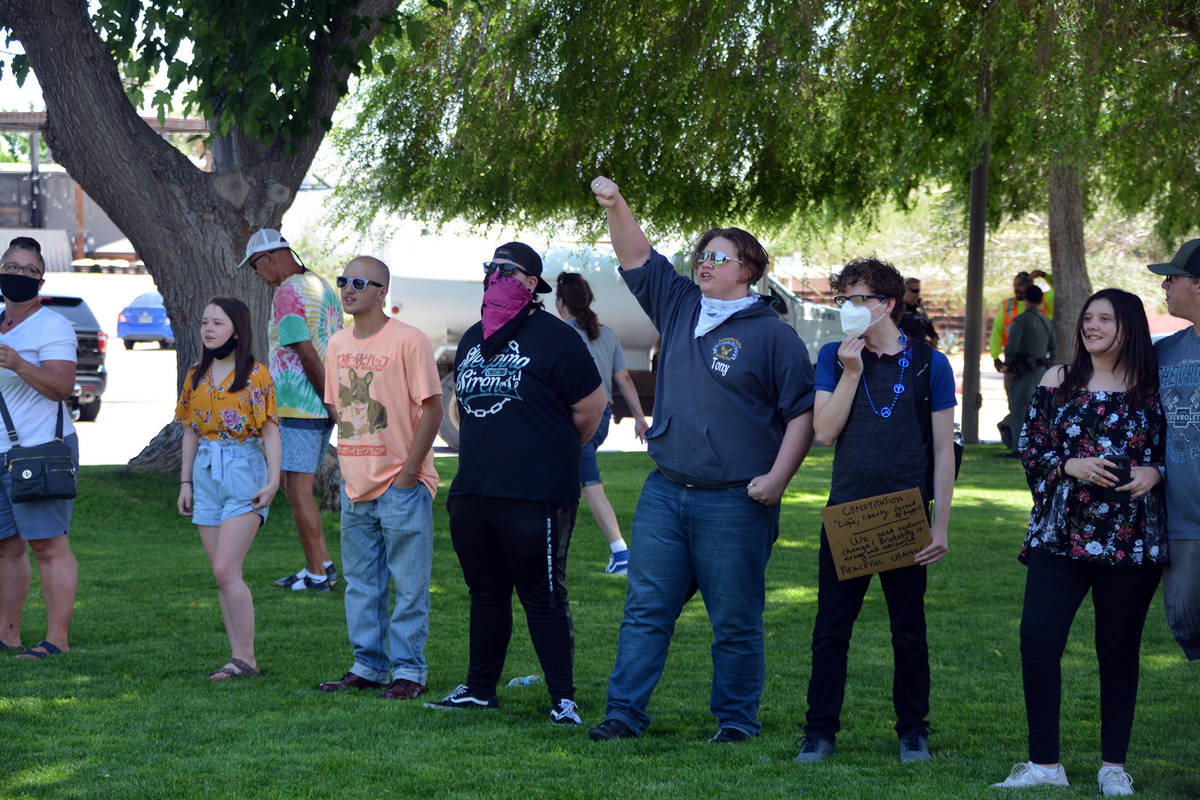 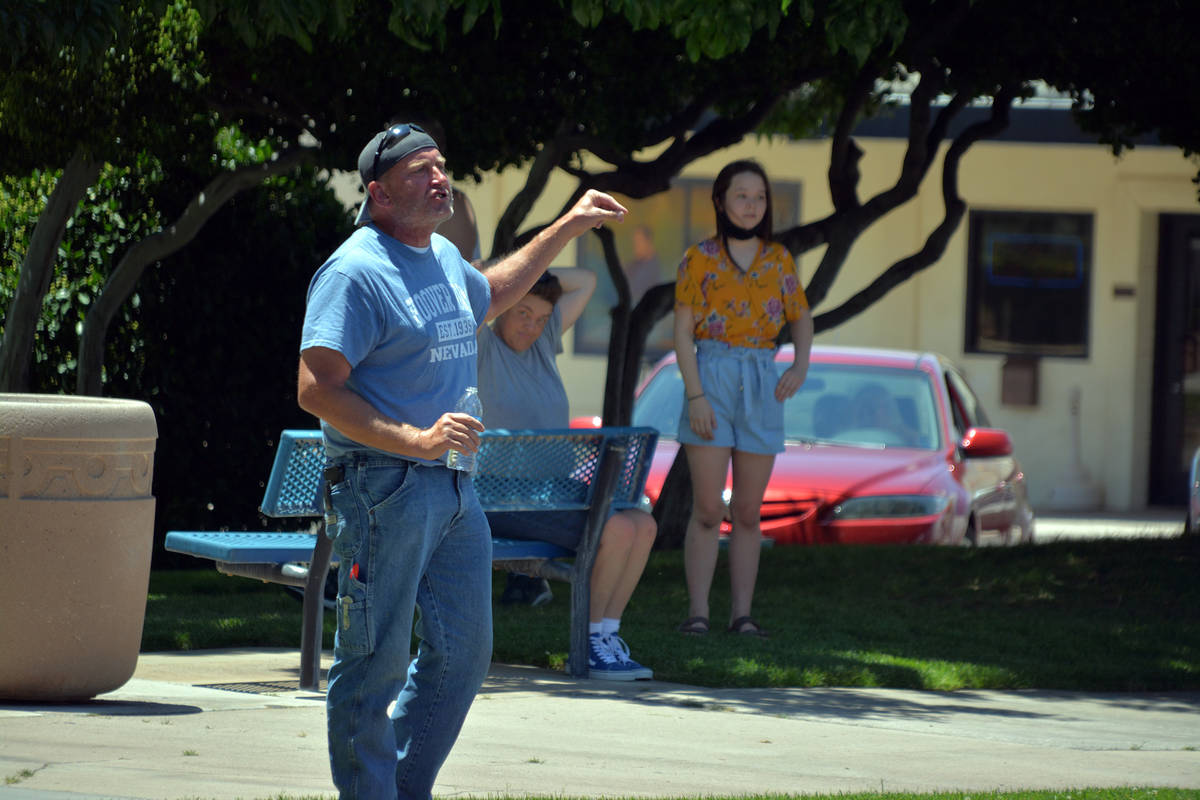 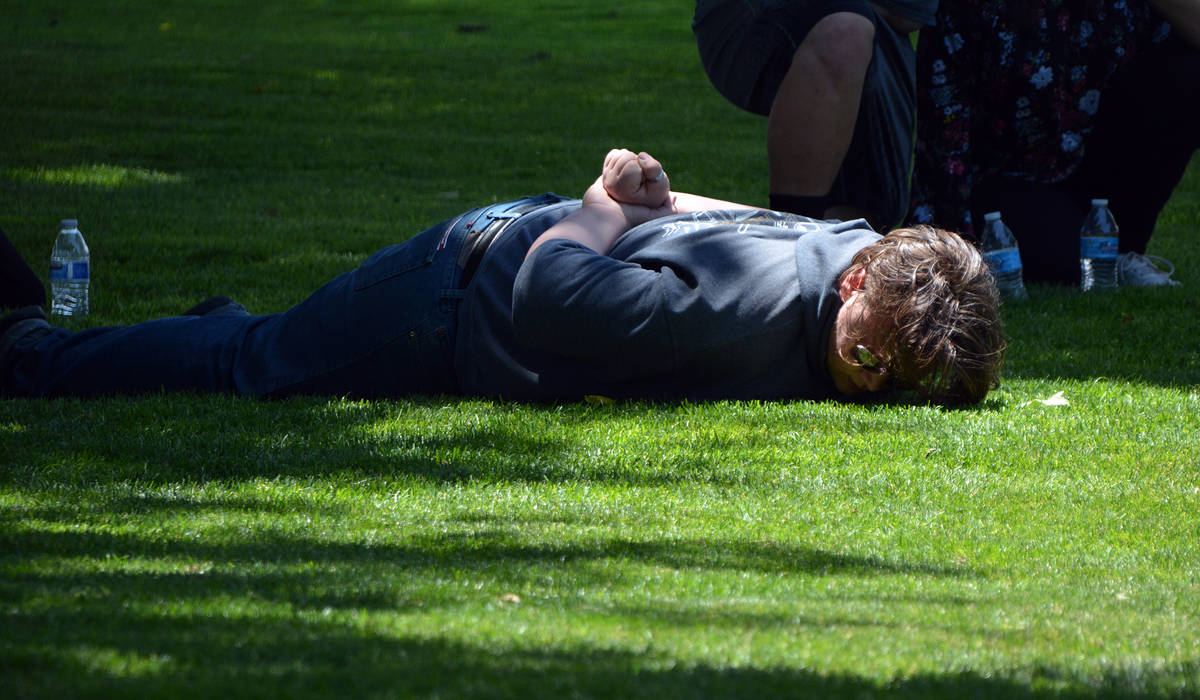 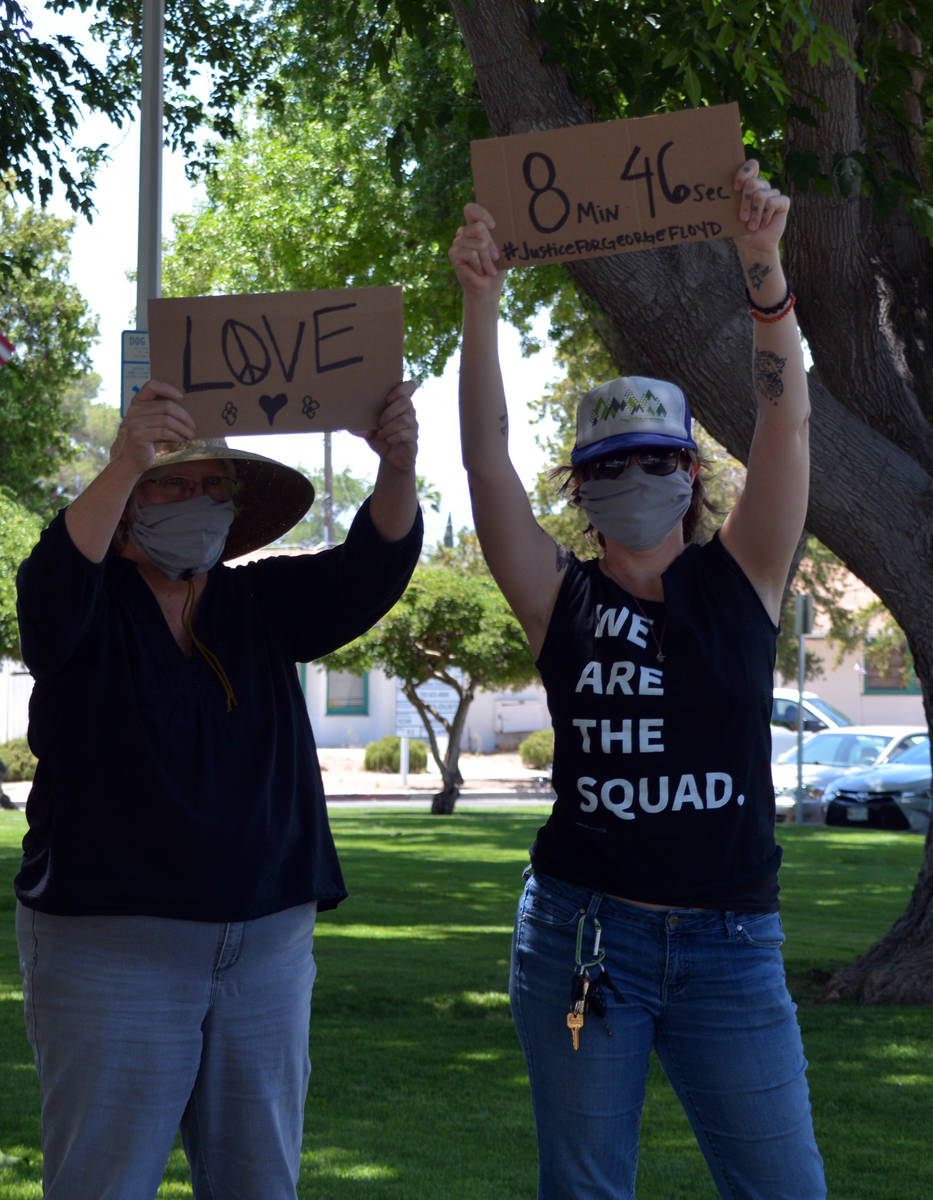 There was no violence or arrests at an informal protest June 4 in downtown Boulder City.

Almost 50 people gathered near the police station on Arizona Street, even though the originally scheduled peaceful event to protest the death of George Floyd while in police custody had been postponed by the organizer.

Floyd was a 46-year-old African American man who died May 25 in Minneapolis, Minnesota, after white police officer, Derek Chauvin, put his knee on Floyd’s neck for several minutes while he was face down on the pavement, handcuffed and gasping that he couldn’t breathe. Chauvin has been charged with second-degree murder.

“I’m here to watch the events unfold and see what these groups had to say,” said Robert Bennett, a Boulder City native.

He said these problems can only be solved through collaboration by people on the different sides of the issue and that it’s OK for people to disagree, but it’s not OK for the violence, looting and killing to occur.

He also said he was sorry to Floyd’s family for what happened to him.

“Once again, a man is dead in the streets of America. … As a white American, I’m sorry for what happened,” he said.

“I think it’s important to speak out and make a change and support black lives,” said Casey Sheppard.

Sheppard came with her mom, Johna Meints, a Boulder City resident, who said she agreed with her daughter’s reasons for being there.

“I’m also here because I’m not going to be bullied,” added Meints about comments that had been made on social media regarding the protest.

Attendee Anthony Smith said he wanted to show solidarity to those people who are suffering injustices by police officers.

Smith was very vocal during the protest and verbally sparred with a person on the opposite side of the proverbial fence who insisted that All Lives Matter instead of Black Lives Matter. This man refused to give his name while he was speaking.

Earlier in the week, statements were made on social media about the possibility of rioting and looting in town because of the protest. There were also rumors there would be a second protest. As a result, several buildings and businesses were boarded up.

“We boarded up on Tuesday night (June 2) just as a precaution to protect our building and our business. … With everything going on regarding looting, rioting, businesses and business owners getting beat up by two-by-fours and such, our family decided to board up,”said Angelica Moorhead, whose family owns the Western and Mexican Center at 415 Nevada Way. “Not every protest, as we know, has been ‘peaceful.’ Our family was trying to be proactive in this situation.”

The National Park Service office at the corner of Wyoming Street and Nevada Way was also boarded up.

“The protest was canceled, but it’s possible some people not associated with the protest could still show up intending to cause damage to property,” said Christie Vanover, public affairs officer for the park. “Because federal buildings have been recent targets of vandalism and we have an obligation to protect federal property, we have boarded up portions of the park headquarters out of an abundance of caution.”

The boards were taken down after the protest.

The doors and windows at Wells Fargo, 412 Nevada Way, were also boarded up as a precaution.

“We boarded up the windows of some of our branches, including the branch in Boulder City, as a precautionary measure during local activities,” said Tony Timmons, Nevada and Utah stakeholder communications for Wells Fargo. “The Boulder City branch is open and the boards are now down.”

After the protest, Mayor Kiernan McManus released a statement condemning the death of Floyd, praising the Boulder City Police Department and supporting the public’s right to protest.

“In the end, participants from both sides met and were able to discuss their thoughts in a calm manner,” he said. “The effort Boulder City Chief (Tim) Shea made to meet with protesters and the calming efforts of our police officers maintained a comfortable distance between the two groups and allowed them to engage in their constitutional right to peaceably assemble. The social media chatter of hostilities were nothing more than rumor and speculation; still, our officers had appropriate plans for a response if needed.”

McManus also encouraged everyone to respect each other and make sure that their actions do not harm others.