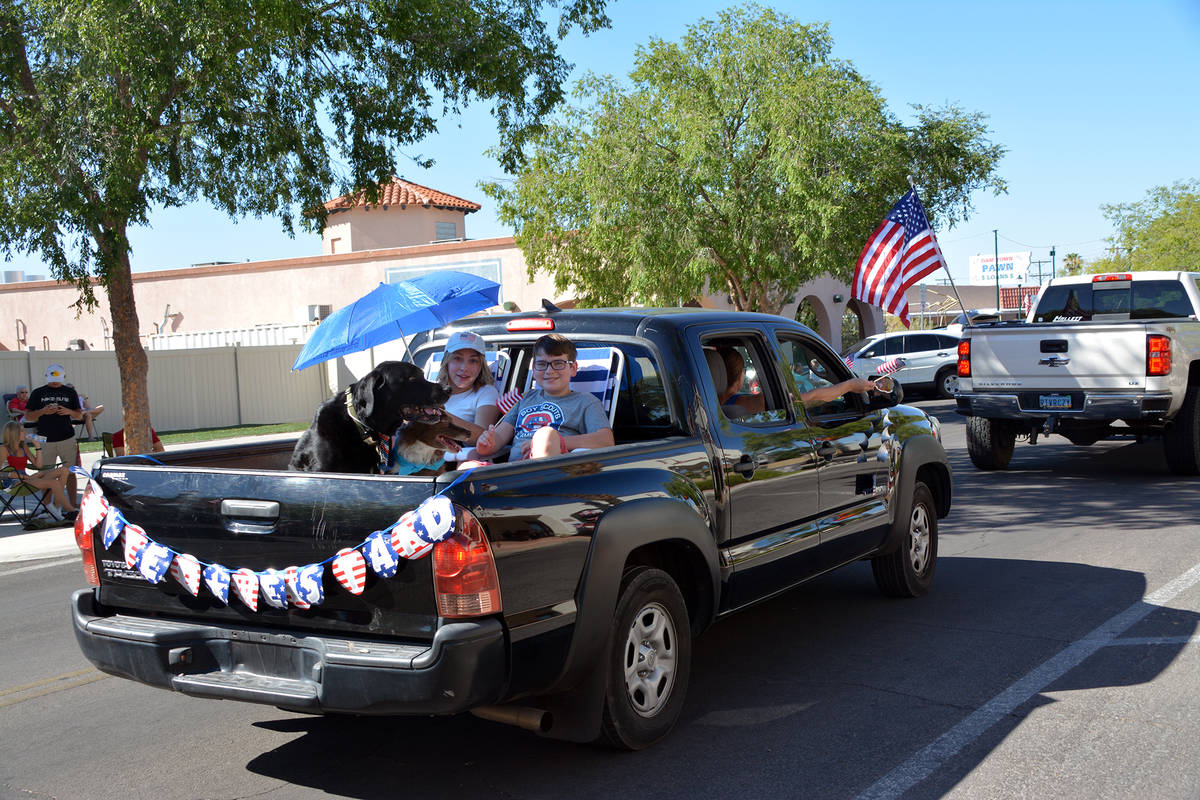 (Celia Shortt Goodyear/Boulder City Review) A family participates in the parade Saturday, July 4, that went through downtown Boulder City. The Damboree Committee canceled the usual parade due to statewide restrictions to help prevent the spread of COVID-19 so local residents organized one.

Even though the Fourth of July in Boulder City looked different this year, it was still a great day in town as people came together to celebrate independence and freedom.

The Damboree Committee canceled the annual parade and fireworks show because of limitations on the size of social gatherings put in place by Gov. Steve Sisolak due to the COVID-19 pandemic. The usual events at the city pool and in local parks were also canceled, and parks remained mostly empty throughout the day.

Residents, however, still found a way to celebrate and planned a parade of classic cars, while the Rotary Club of Boulder City held a revised version of its annual pancake breakfast.

“This is a great event because it’s the first one held this year,” said Rotarian Dale Ryan about the breakfast, which is usually held in Bicentennial Park.

This year the food was prepared in the Senior Center of Boulder City’s kitchen with board members placing the pancakes and sausage in to-go containers.

Ryan and several other members were on hand Saturday morning to bring breakfast to people as they drove through the parking lot of the senior center. Club President George Rosenbaum said they usually plan for 700 people to attend, but this year they planned for 350.

The classic car parade had approximately 180 vehicles participate. It was organized by resident Jevan Dixon.

“We have to give the people hope,” he said.

Dixon said he and fellow members of Deadman Car Club decided to hold it after they had a similar parade of classic cars drive by resident Rosie Shafer’s home in April for her eighth birthday.

“This is no different. … We ask people to stay safe, wear masks and social distance,” he said.

Participants were not supposed to throw candy or gifts from their vehicles as is usually done in the parade, and there was no water section. People gathered downtown for the event.

“We came because it’s a community and we want to support the community,” said Angela Dyer, Boulder City resident. “We do the parade every year and didn’t want to miss it.”

Dyer said she was happy when she found out there would be one.

“I think everyone will be responsible,” she said.

Sellinger’s daughter, Danielle Alexander, moved to Boulder City in April and this was their first Fourth of July in town.

“I think it’s super cool,” said Alexander of the celebration.

When the Damboree Committee canceled the parade, residents expressed their frustration on social media and some said they would hold a “protest parade.” Some of the participants did come to protest and others were there to just celebrate the Fourth of July.

“It’s a gorgeous day and I want to show our patriotism to our country,” said Paul Trautman. “It’s nice seeing the number of people here who want to see the Fourth of July celebrated and not repressed.”

Mark Lamfers said he was participating just to get out and drive.

Oiler, 72, is a veteran who fought in the jungles of Vietnam from 1968-1970. He drove one of his two Chevrolet Corvettes in the parade.

“I’m that guy who will stand my ground until the day I die,” he said.

Local business owner Rolando Medrano said he found out about the parade earlier in the week and felt he needed to participate.

“It’s … celebrating our independence day; it’s what being American is about,” he said. “It’s the epitome of our freedom to celebrate when someone tells you you can’t celebrate Independence Day. … This is what we want to do.”

Medrano said he respects everyone and their opinions. He also said he hopes that respect is reciprocated.

He had his BC Dam Taco trailer and was giving away free tacos.

The event was not endorsed by the city because of Sisolak’s directives about social distancing and public gatherings.

Police Chief Tim Shea said it had been described to him as a classic car cruise and most of the people participating followed social guidelines and traffic laws.

“For the cruises I have seen or had been aware of over the past couple of months … folks stayed in their vehicles and just drove the route, obeying traffic laws. … For the most part that is what occurred,” he said. “The significant majority of folks did what was required. They followed the traffic laws, they did not congregate in groups, when they did they wore masks as required.”

Shea said there were some people who did not follow the rules and officers had to be moved from patrol to step in and take “appropriate corrective actions.”

“We were not facilitating a ‘parade,’” Shea said. “We were controlling traffic and illegal behaviors to avoid conflicts that could result in a ‘road rage’ type situation, collisions, violations of law and to ensure compliance with the governor’s directives as much as reasonably possible under the circumstances.”

Two local restaurants were also affected by the cancellation of traditional Fourth of July events and fewer people in town.

“There was no wait list this year,” said Cindy Ford, owner of Southwest Diner, 761 Nevada Way. “They usually have to wait 30 minutes.”

Terry Stevens, co-owner of the World Famous Coffee Cup, 512 Nevada Way, said there were less people in the restaurant, but they still did well.

“Our business was good … . People were glad to be out,” he said.