Hali Bernstein Saylor/Boulder City Review The construction of Hoover Dam, including the migration of the 31ers to Southern Nevada, is depicted by artwork on a sound wall of Interstate 11. 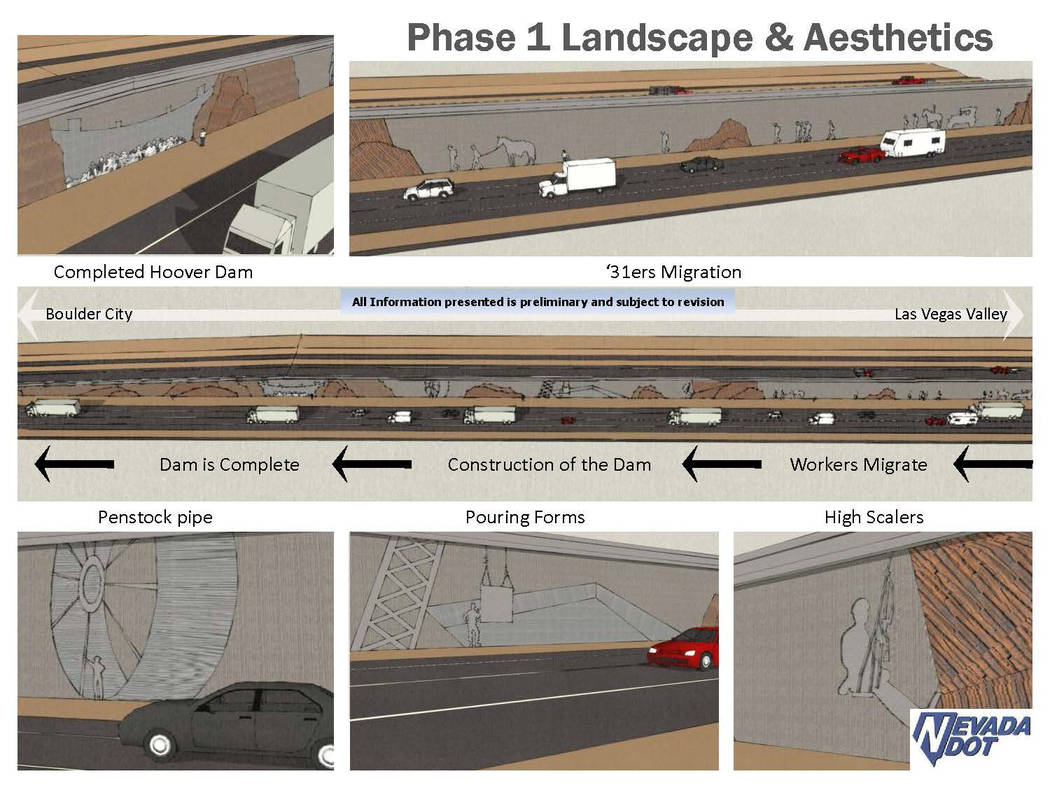 Nevada Department of Transportation Planning to be completed in spring 2018, the new Interstate 11 will feature a retaining wall with art that depicts the construction of Hoover Dam.

The new Interstate 11 outside Boulder City will feature artwork depicting what made the town famous: construction of Hoover Dam.

Nevada Department of Transportation is responsible for the first phase of I-11, which features a four-lane concrete freeway between Silverline Road and Foothill Drive, said Tony Illia, public information officer at NDOT.

The highway also includes a 28-foot-tall retaining wall with art that depicts scenes from the construction of Hoover Dam.

“The Phase One soundwall is the project’s visual centerpiece, which captures and celebrates Boulder City’s cultural history,” Illia said. “The decision to use graphics illustrating the dam’s construction was an easy one. The dam played a pivotal role in shaping Boulder City and Southern Nevada, fueling the region’s economic and development prosperity.”

The wall will also be coated with a special anti-graffiti film that serves as a deterrent for taggers, as well as featuring 20,000 cactuses, decorative rock and 5 miles of tortoise fencing.

Regional Transportation Commission of Southern Nevada is handling Phase Two of the project between Railroad Pass and the Hoover Dam bypass bridge. Construction is running concurrently with Phase One, and is also scheduled to be finished in early 2018.

New I-11 Artwork By the Numbers

■ 8 graphics depicting the construction of the Hoover Dam