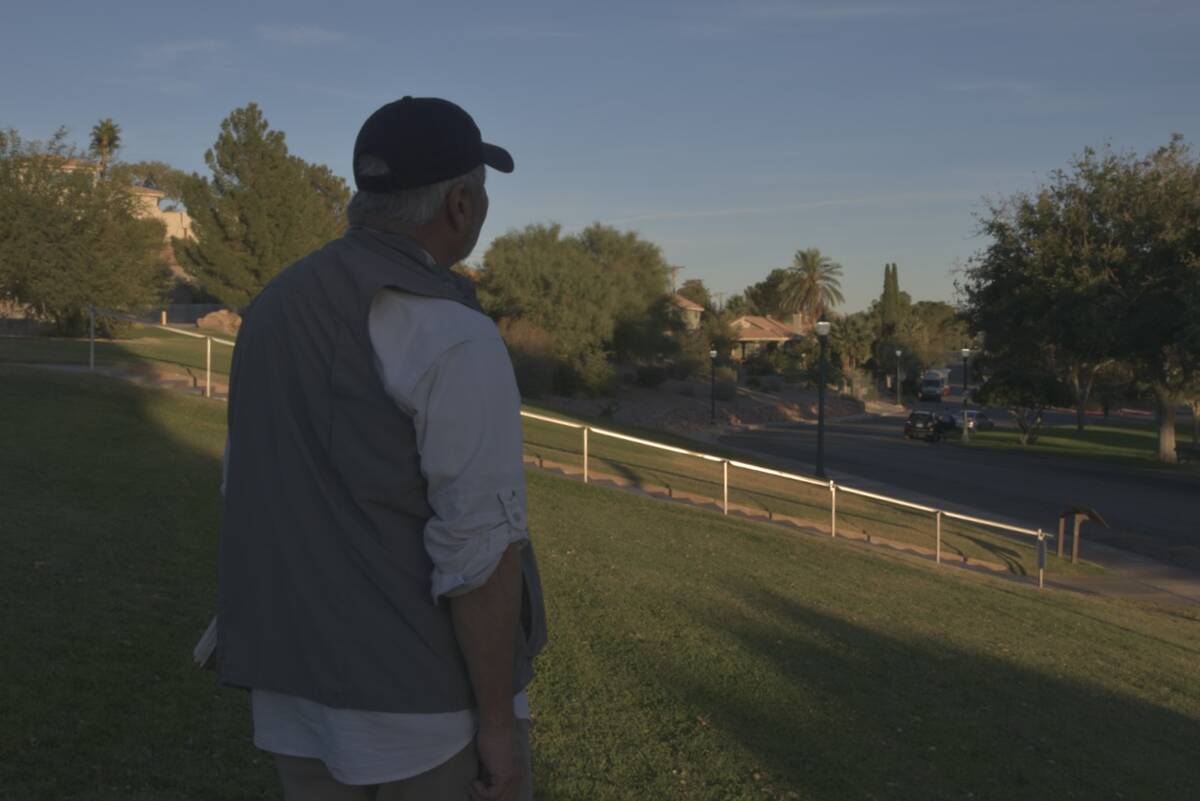 (Jimmy Romo/Boulder City Review) Alan Goya stands on the lawn below the Bureau of Reclamation's administration building near Wilbur Square Park that it plans to remove next year. 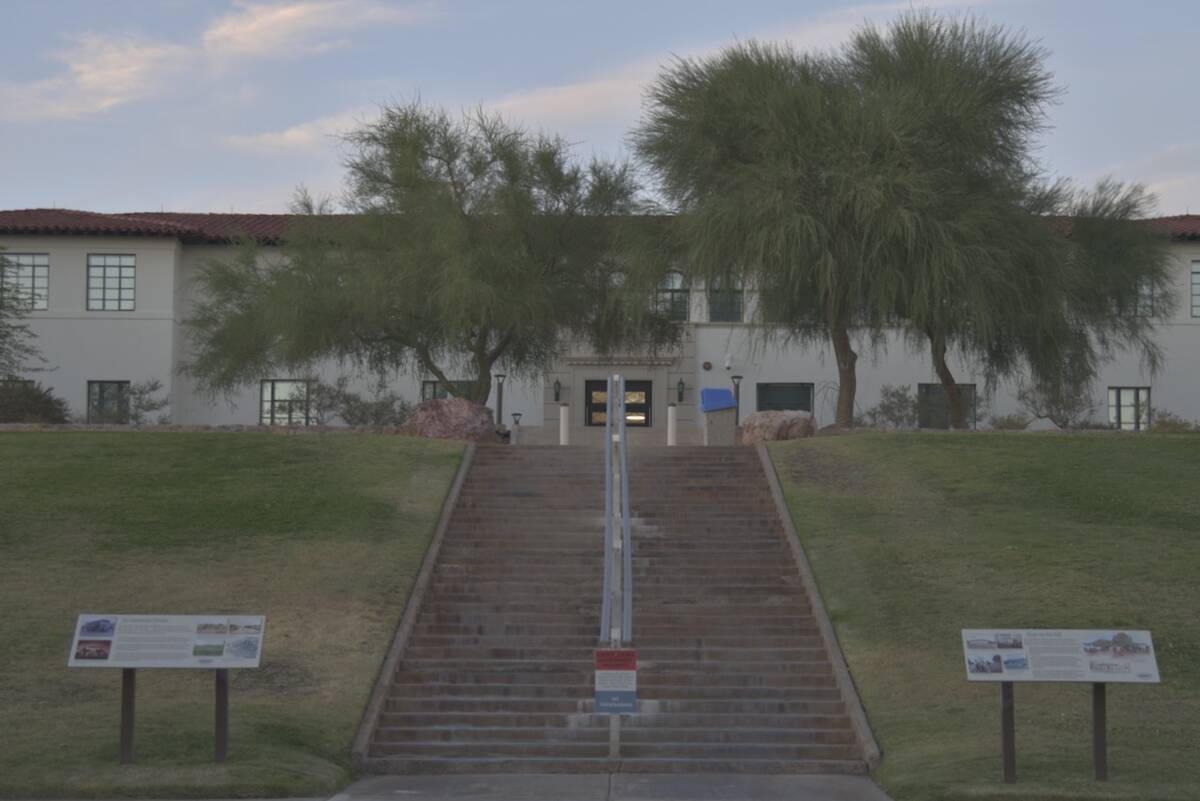 (Jimmy Romo/Boulder City Review) The lawn in front of the Bureau of Reclamation's administration building, as seen Tuesday, Oct. 25, is expected to be removed early next year, saving roughly 3 million gallons of water. 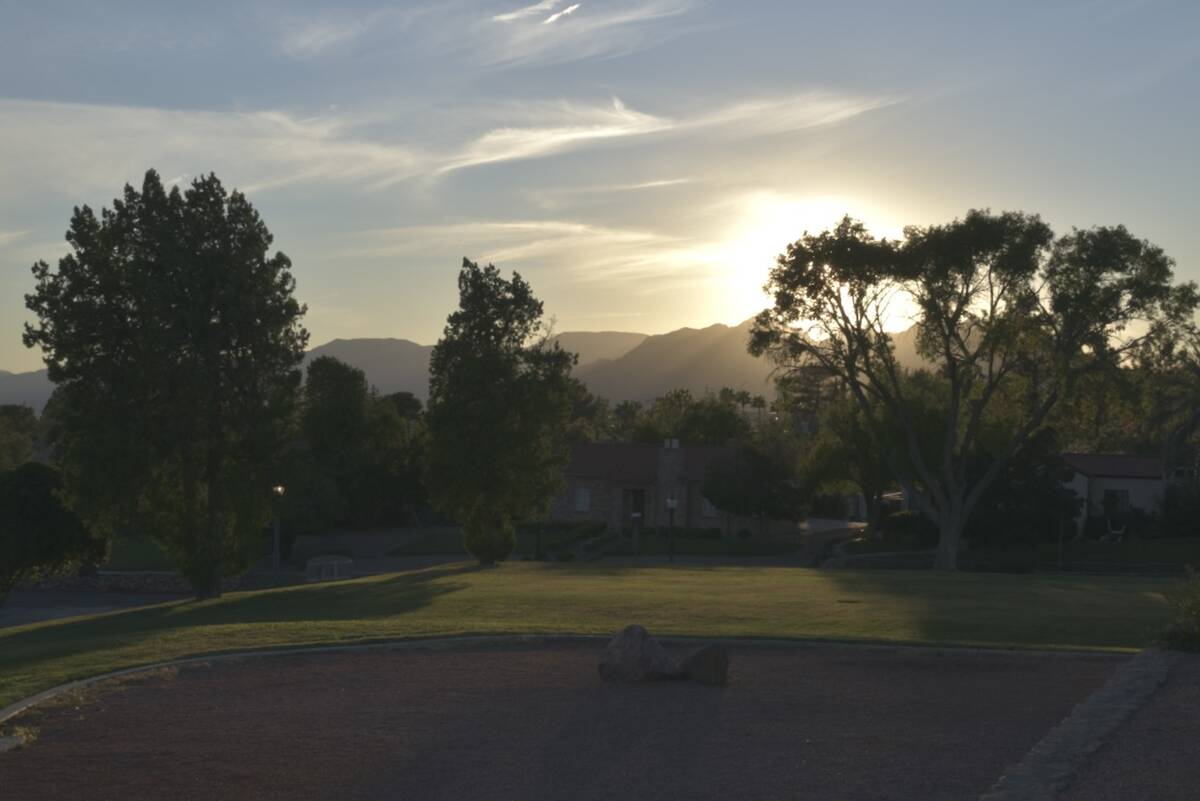 (Jimmy Romo/Boulder City Review) The sun sets in Boulder City on Tuesday, Oct. 25, casting a glow on the lawn that the Bureau of Reclamation plans to remove next year as part of its water conservation efforts.

The Lower Colorado Bureau of Reclamation is planning to replace one of the first lawns in Boulder City with desert landscaping, again.

Alan Goya, a former member of the city’s Historic Preservation Committee, said he doesn’t believe it’s in the best interest of the city’s history to replace the lawn with desert landscape

The lawn to be replaced is on the top of the hill, above Wilbur Square Park, where the bureau’s regional director’s office complex is located. Removal of the lawn is expected to save roughly 3 million gallons of water, according to Doug Hendrix, public affairs specialist for the Lower Colorado Basin Bureau of Reclamation.

“We’re going to go with a series of desert-tolerant plants, shrubs and vegetation,” Hendrix described the intended landscape. “There will be rock, sand, cactus and a lot of native species that are more attuned to the desert climate here, and a lot less water consumption.”

Southern Nevada Water Authority and the Bureau of Reclamation have done studies that demonstrate that having turf requires more water than desert landscaping.

“What we’re trying to do here is be responsible with our use of the Colorado River supply,” Hendrix said. “We’re subject to the last 22 years of drought, so we’re trying to be a good example ourselves of cutting back on our use of precious water supplies.”

“(The Bureau of Reclamation) was going to take out the lawn 30 years ago,” Goya said. “And there was a compromise where they put more drought-tolerant plants.”

The turf once stretched the full length of Park Street above Wilbur Square, now it is half gravel and half grass. But back in the 1930s, for the Bureau of Reclamation no Boulder City building was complete until trees and lawns were thriving.

It was important for the bureau to have the city look like the rest of America — green and rich with vegetation.

“They imported topsoil from Kentucky here and planted 15,000 pounds of it and planted seeds, trees,” Goya said. “And voila, you have America.”

According to Goya, the lawn was likely one of the first public spaces in Southern Nevada. Boulder City was established in the 1930s by the Bureau of Reclamation as a place to house the workers who built Hoover Dam. The workers, in turn, brought their families with them and they needed somewhere to go.

“We realize these are historic buildings, so we’re trying to strike a balance with the community so that it’s still tasteful, yet responsible with the local climate,” Hendrix said.

The bureau plans to unveil its full design by the middle or end of January.

Locals can learn more about the plans and offer their feedback during an open house between 4-6 p.m. Nov. 10 at the regional director’s conference room in the administration building. The landscape designs, and possible paths they can include, will be on display.

Engineers and architects will be present to hear locals’ comments.

Once the contract gets approved for construction, the new landscaping would be completed in mid-to-late June.

Goya, who shares the history of Boulder City with tourists and others, said he believes it would be difficult to tell the story of the city without one of its first lawns.

“It’s not for us to worry about it,” Goya repeats what his friend told him. “The next generation will figure it out if they want that knowledge.”