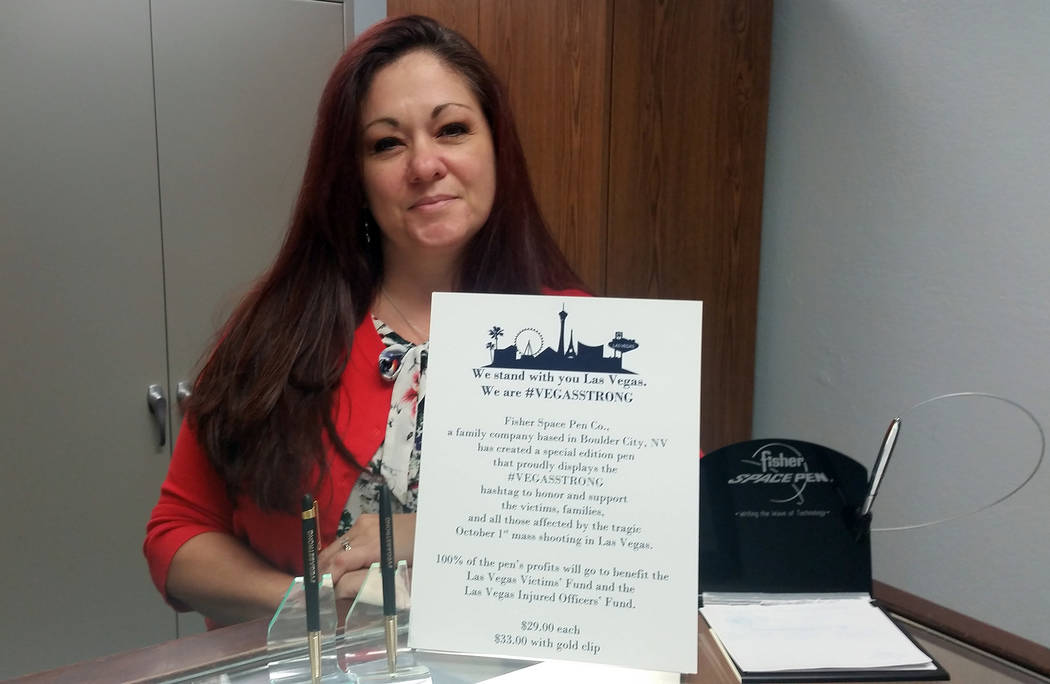 Celia Shortt Goodyear/Boulder City Review Christi Olsen, Fisher Space Pen's social media manager, showcases the VegasStrong pen she helped inspire at the company. All of its proceeds go to help those affected by the mass shooting in Las Vegas on Oct. 1. 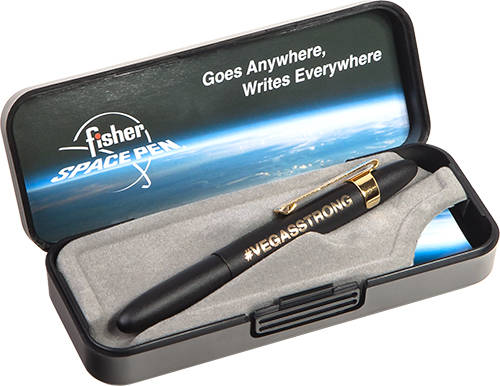 A local business has created a new way to give back to the community and to help those who were affected by the mass shooting Oct. 1 in Las Vegas.

Like many others in the Las Vegas and Boulder City communities, Fisher Space Pen and its employees were emotionally effected by the mass shooting at the Route 91 Harvest country music festival, including the company’s Social Media Manager Christi Olsen.

“It affected my community and it tore me up,” she said.

After the shooting she wanted to help those people who were affected by it.

“I work for a company that’s local,” she said. “We’re a family. It’s only right as part of the community to help those in need. The pain does not stop. The suffering does not stop when the media stops. … There is still such a need where these people are concerned.”

To figure out how to help Olsen talked to Matt Fisher, vice president of marketing and sales at Fisher Space Pen.

“I urged Matt that we had to do something,” she said. “We had to show them we care.”

After talking with Fisher, she came up with the idea to have a gold and black VegasStrong space pen. The colors are also a tribute to the Las Vegas Golden Knights.

She said that everyone is excited about two things right now: the Golden Knights and everyone coming together after the shooting. The pen highlights both.

“Of course, we are all devastated by this crazy tragedy,” Fisher said. “We wanted to support the community. … We figured this is best way to do that.”

Olsen and Fisher came up with the idea on a Monday and by Wednesday the pens were ready to sell.

Pens sell for $29 or $33 with a gold clip pen clip. All proceeds will be evenly divided between the injured police officers fund and the Las Vegas Victims Fund for as long as the pen is sold.

Fisher said that there is a not a goal in terms of a specific amount of money to raise. Rather, the company will manufacture the pens as long as people are buying them. If any are left over, they will be donated to police officers as they are useful in their field.

“I’m very excited Matt let me do this,” Olsen said.

Olsen said she hopes people will buy one or several to help provide for the victims’ hospital bills, grocery bills, travel expenses and other costs incurred from the shooting.

For more information about dropping off a donation, contact Olsen at Christi@spacepen.com.

The company’s retail hours are 7 a.m. to 4 p.m. Monday through Friday, and locals receive 20 percent off sales at the store.

Fisher Space Pen has been in Boulder City since 1976. Its pens write in the harshest of conditions including zero gravity, over grease, at any angle and underwater. In 1968 one of its pens was used on the Apollo 7 mission, and since then a space pen has flown on every manned space flight.