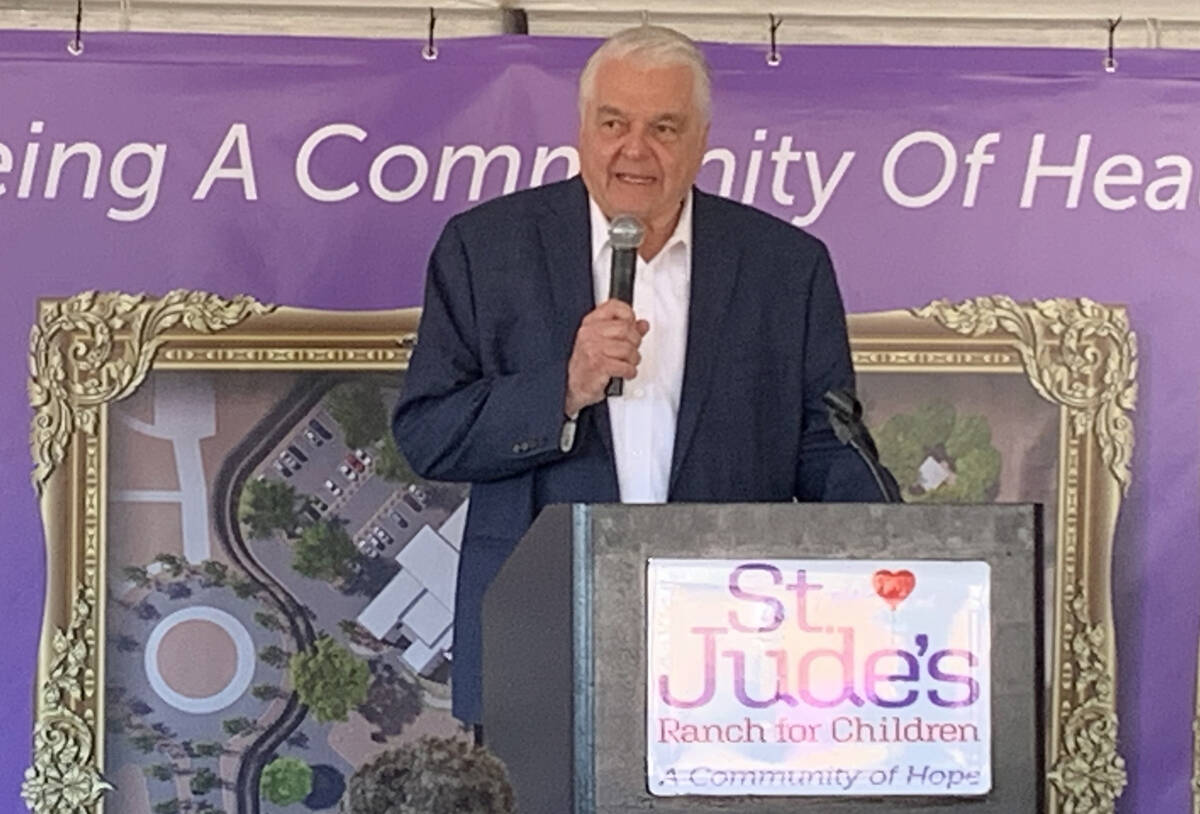 (Hali Bernstein Saylor/Boulder City Review) Gov. Steve Sisolak spoke about the need to provide all-encompassing services to teenage victims of sex trafficking to “set them up for future success” during the groundbreaking ceremony for the new healing center at St. Jude’s Ranch for Children in Boulder City on Tuesday, Oct. 25. 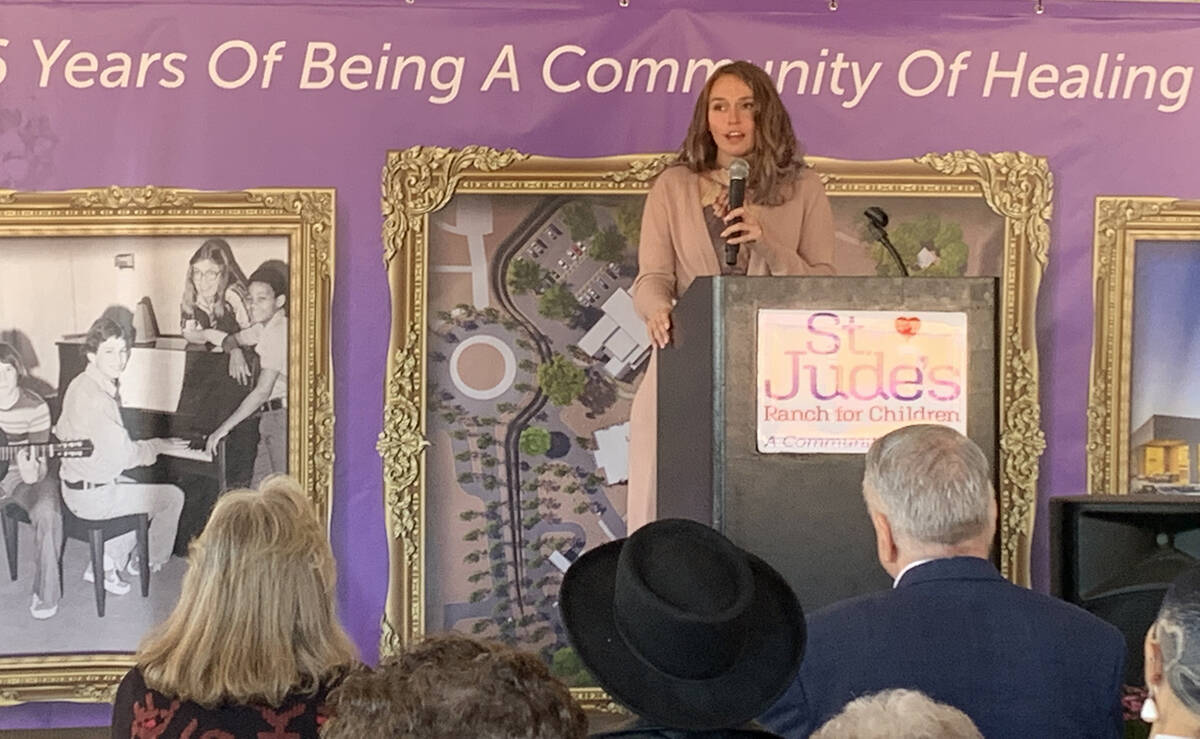 (Hali Bernstein Saylor/Boulder City Review) Annika Huff brought tears to the eyes of many after sharing her experience as a victim of sex trafficking and the importance of the new St. Jude’s Ranch for Children’s Healing Center. Ground for the new center was broken during a ceremony Tuesday, Oct. 25, 2022. 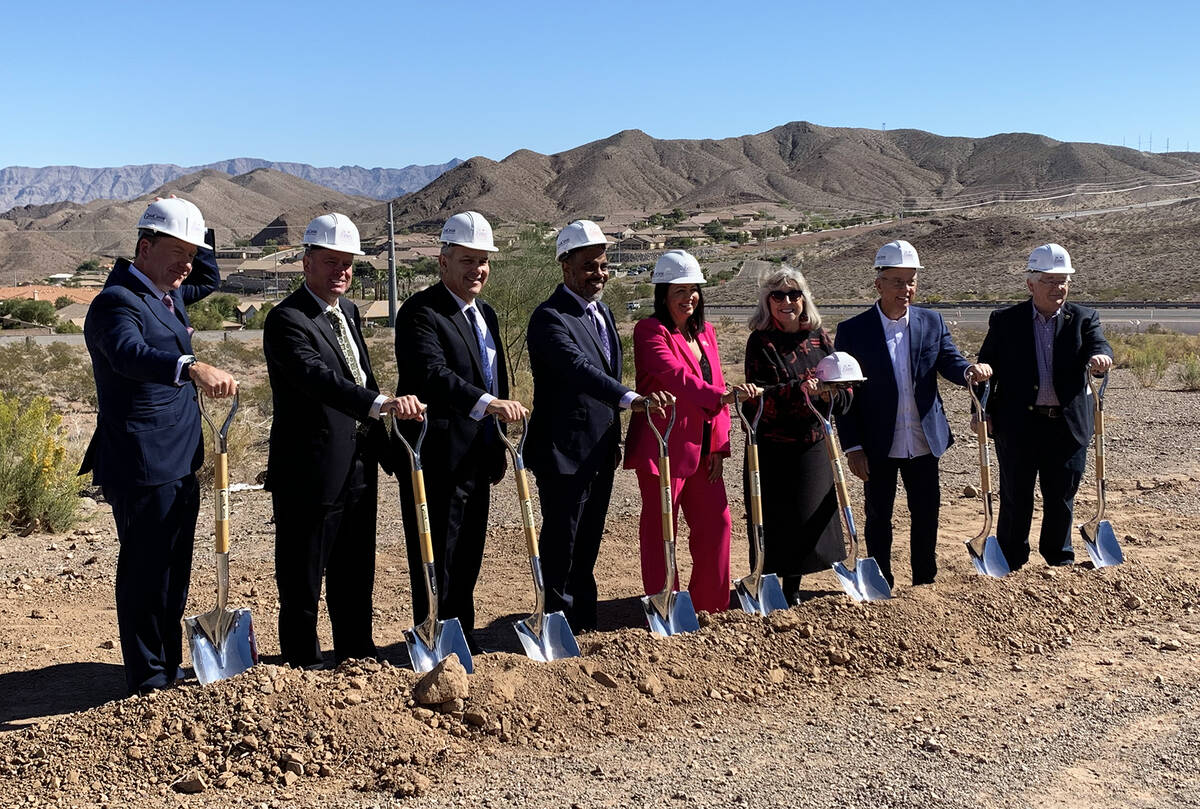 As ground was broken Tuesday morning for St. Jude’s Ranch for Children’s Healing Center, those attending the ceremony heard about the life-changing impact it will have on the lives of sex trafficking victims by a survivor and the people working to make the facility a reality.

“I can only image what my healing journey would have been if I had gotten support when I was younger,” said sex trafficking victim and survivor Annika Huff. “They will have so much gratitude for what you made possible every day for the rest of their lives.”

Huff said she grew up in a broken home where trauma was a constant part of her life. She became a runner and was already familiar with homelessness, couch hopping, hunger and no school when she came to Las Vegas at the age of 17.

Just days before she was planning to move to Ohio in search of a better life, she met her trafficker.

“Within four months I was on the brink of death more times than I can remember,” she said.

Her trafficker was abusing her and she was dying when he sold her to another trafficker for $300. When he realized her condition, the new trafficker contacted her first trafficker and threatened to take back his car if he didn’t take Huff back.

She said her trafficker needed the car more than he needed her so he brought her to the hospital. Huff had 29 broken bones, lacerations to her liver and spleen, weighed 93 pounds and had a gangrene infection that was just hours from reaching her bloodstream and killing her. She underwent 12 surgeries in the month she was hospitalized.

Huff was the first survivor to receive a jury trial against her sex trafficker in the state. He was found guilty of sex trafficking, first-degree kidnapping and 13 other charges and sentenced to life in prison without the possibility of parole.

She said a few days before his trial, she went to a bus station where she had been trafficked and saw a 15-year-old girl who was being trafficked. That changed her life and she began advocating for other victims and working in the anti-trafficking movement.

“Healing is continuous. I’m still doing it today,” she said.

She said the new center will be vital to the victims’ survival and healing from their ordeals, something she had to do on her own.

“Those children will be completely surrounded and supported here at St. Jude’s,” said Huff after sharing her story.

The center will provide safe homes and a nurturing recovery program for children who have been forced or manipulated into have sex for money.

“No longer will they have to feel shamed, blamed or like a caged animal ready to fight,” said Christina Vela, CEO of St. Jude’s Ranch for children and the “self-appointed hustler for hope.”

“Child sex trafficking has devastating consequences for its victims, including long-lasting physical and psychological trauma, disease and even death,” she said. “Through the creation of the healing center on our flagship campus in Boulder City, Nevada, we will be able to address every facet of the recovery process, while providing a safe space in which they can heal, and while still participating in fundamental parts of childhood, including going to school and creating happy, positive experiences.”

“Today is a major step to build upon St. Jude’s legacy of 50 years of serving children,” said Gov. Steve Sisolak, who was moved to tears by Huff’s story and called her a remarkable young woman and a role model for victims of sex trafficking.

By working together to provide critical services for children in need, St. Jude’s and its supporters can set those youth up for future success, he said.

“This gives new meaning to the term wraparound services. It’s like a warm and lasting embrace that enables them to see hope for their future,” he added.

The healing center will sit on 10 acres and feature a series of individual therapeutic homes that will mimic a neighborhood with walking paths and landscaping, designed to foster a sense of safety. Therapy offices and outside areas will encourage transformation through connection to nature.

Jesus Jara, district superintendent, said the partnership with St. Jude’s allows them to expand on their support of children and provide the resources they need.

Grand Canyon Development Partners, EV&A Architects, Taney Engineering and the Whiting-Turner Contracting Company will be handling the design and construction of the center.

“From the beginning, the healing center has been an incredibly important project to our organization, and we are honored to do our part to give back throughout the development process,” said Sam Nicholson, president of Grand Canyon Development Partners.

Cost of the design and construction of the healing center are estimated at $25 million. During the ceremony, Vela announced they had recently received a $2 million donation, with a matching grant, from the Engelstad Foundation and said they still have some funds to raise.

Additionally, she introduced Angela Biletnikoff, wife of former Raider and assistance coach Fred Bilentnikoff, who announced they would be building Tracey’s Place of Hope, named after their daughter who was murdered, and the Biletnikoff Center for Hope on the healing center campus.

Construction of the center is scheduled to be completed by spring of 2024 and it is expected to be open for residents that summer.