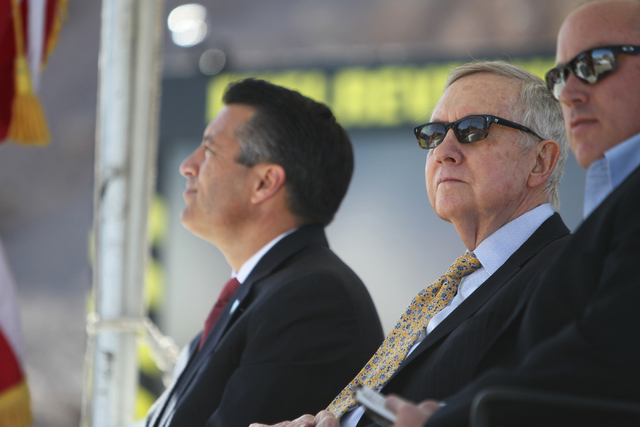 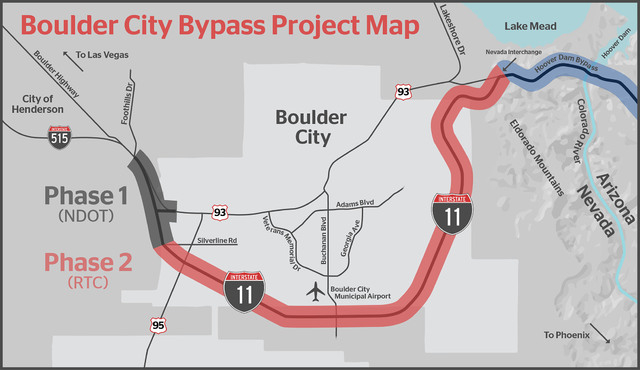 After a 12-year discussion about funding, designs, environmental studies, and what will be best for Nevada and Arizona when Interstate 11 is built, several politicians and department heads joined in its groundbreaking Monday morning outside Boulder City.

“This is one of the most important infrastructure projects in the history of Nevada,” Gov. Brian Sandoval said. “It’s going to be so important for the continued development of Southern Nevada and making sure that we can distribute to all points of the world.”

Numerous politicians took the stage expressing their excitement about the Boulder City bypass, the first step in connecting Las Vegas to Phoenix by interstate.

The completed bypass project will be a 15-mile, four-lane interstate with interchanges at U.S. Highways 95 and 93. There will be 10 bridge structures, four wildlife undercrossings, one wildlife overcrossing, an off-highway vehicle crossing, and a southbound scenic parking area that overlooks Lake Mead as part of the project’s second phase managed by the Regional Transportation Commission of Southern Nevada and constructed by Las Vegas Paving.

The 2.5-mile first phase closest to Henderson will be managed by the Nevada Transportation Department and constructed by Fisher Sand &Gravel. The commission’s portion of Interstate 11 consists of 12.5 miles that begin near Railroad Pass before circling around the Boulder City Municipal Airport and eventually connecting at the Hoover Dam bypass bridge.

According to Boulder City Mayor Roger Tobler, the city gave 640 acres for the project.

Senate Minority Leader Harry Reid, D-Nev., called the new interstate a “big deal,” as well as a step in the right direction for the country’s infrastructure problem.

“They (Las Vegas and Phoenix) are the only two metropolitan areas not connected by interstate,” Reid said. “It’s good for Nevada and Arizona.”

“They’re not one-shot jobs. It’s going to take a long time to build that,” he said.

After initial talks began about creating the interstate in 2003, Reid was able to acquire $27 million in federal funding for the project in 2005.

Clark County Commissioner Larry Brown, who also serves as chairman of the Regional Transportation Commission, said I-11 would not have been possible without the county’s fuel-revenue indexing, which allows the commission to collect a percentage of revenue from the gasoline pumps until the end of 2016 to fund road projects.

“Interstate 11 wouldn’t have been built without the (funds). Certainly not in our generation,” he said. “Today’s an example of how the future is going to be partnerships. When it comes to funding infrastructure, nobody can do it alone.”

Brown said the county is expected to gain about $700 million from the fuel-revenue indexing, which will create about 200 road projects and nearly 10,000 jobs in the next few years.

Politicians in attendance commended the bipartisan work displayed during the discussions of I-11.

“This shows the commitment (that) our two states have to this project,” Sen. Dean Heller, R-Nev., said.

“It’s obviously a big day for all of Nevada, and for Boulder City for sure,” Councilman and Mayor-elect Rod Woodbury said. “Mayor Tobler gave great leadership in getting us here. I’m just proud to be a part of it and we’re going to try to steer it in the right direction and make sure we protect Boulder City going forward.”

The city approached the Transportation Department and asked for a name change of the U.S. 93 Business Route to Boulder City Parkway, with the hope of getting more drivers to come through town after the interstate is built. The official name change is expected to take place by the end of the year, and signs on both sides of the bypass will feature the new name.

Hardy said the bypass will help increase local businesses, and Woodbury said he plans to work hard to keep Boulder City businesses on the forefront.

“We have been planning, and we’ll continue to plan for the future in terms of our businesses,” Woodbury said. “We’ve heard all the partnerships that have been going on between local, state and federal governments, and that’s going to have to continue to make sure it’s done properly.”

Reid said projects like I-11 are crucial to fixing the country’s infrastructure deficit, which is at $3 trillion. According to Reid, every dollar spent on highway projects generates $6 in return.

“This country is in desperate shape when it comes to ways to pay for our infrastructure. We’ve got to do something about that,” he said.

Fencing is scheduled to be placed around the construction site by April 20, and tortoises will be cleared out for preservation purposes.

According to Chad Anson of the CA Group, a Las Vegas-transportation engineering company that will lead the design for Las Vegas Paving, blasting around Eldorado Ridge will begin in May or June and will take about a year to complete.

Officials expect the bypass to be completed by July 2018.

“This is one of the most critical projects in Nevada’s history,” Brown said. “We’re starting something today that will impact generations to come.”