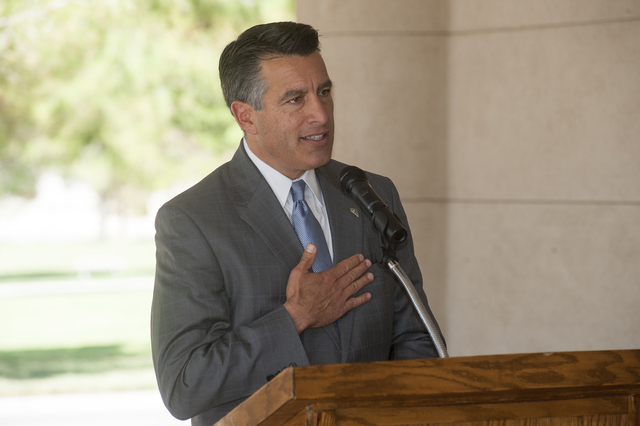 Steve Andrascik/Boulder City Review Nevada Gov. Brian Sandoval holds his hand over his heart as he spoke about making Nevada the most veteran-friendly state in the union. He received a check for $4.9 million during a ceremony Friday at the Southern Nevada Veterans Memorial Cemetery in Boulder City. The grant will be used to make improvements to the facility by evening gravesites and installing sod. 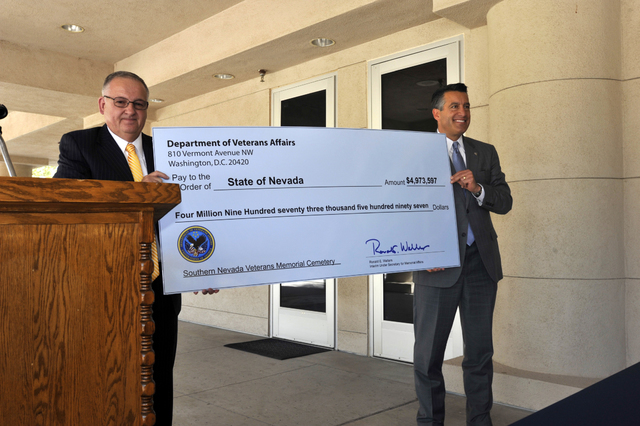 Gov. Brian Sandoval was on hand Friday as the Southern Nevada Veterans Memorial Cemetery received a nearly $5 million federal grant to improve more than 20,000 graves that have suffered wear and tear from the desert weather during the past 20 years.

“I want Nevada to be the most veteran-friendly state in the country,” Sandoval said. “I’m really proud of this staff and of this beautiful cemetery. This grant will ensure that this continues to be a sanctuary and a shrine to the men and women of our military.”

Five years after the initial application for a $5 million grant, it was approved for $3.5 million in October. The amount was increased to $4.97 million during the ensuing 10 months by the U.S. Department of Veterans Affairs.

“We sent out an inspection team and they returned saying this cemetery could really use some help,” said George D. Eisenbach Jr., director of the veterans cemetery grants program at the department. “So when another $1.4 (million) became available, and it could really help out, we said, ‘Let’s do it.’”

The grant will pay for contractors to remove grass and soil, relevel deteriorated plots and realign all grave markers before putting everything back together to look like new, according to cemetery superintendent Chris Naylor.

The project is estimated to take about a year and will include nearly 22,000 graves, according to Naylor. The bid process has been completed and the job awarded to Pace Contracting Co. of Las Vegas. Work is expected to start in early September.

“Nevada and Arizona cemeteries face a similar issue with the dry-soil conditions, which causes a lot of this,” Naylor said. “The wind brings in a lot of sand and plant debris which can cause the soil to raise. In some of the lower sections that don’t have the trees, we’ve the seen the soil raise as much as 4 inches in just one year.”

The cemetery is the second busiest in the nation with more than 100,000 visitors annually, according to Sandoval.

“This is a sacred place and these men women traveled to far away places to make the ultimate sacrifice, ensuring our freedom,” Sandoval said. “It’s important that the ceremony associated with their burials should have the ultimate dignity. Thanks to years of work from a lot of people, this is a landmark moment we get to celebrate.”