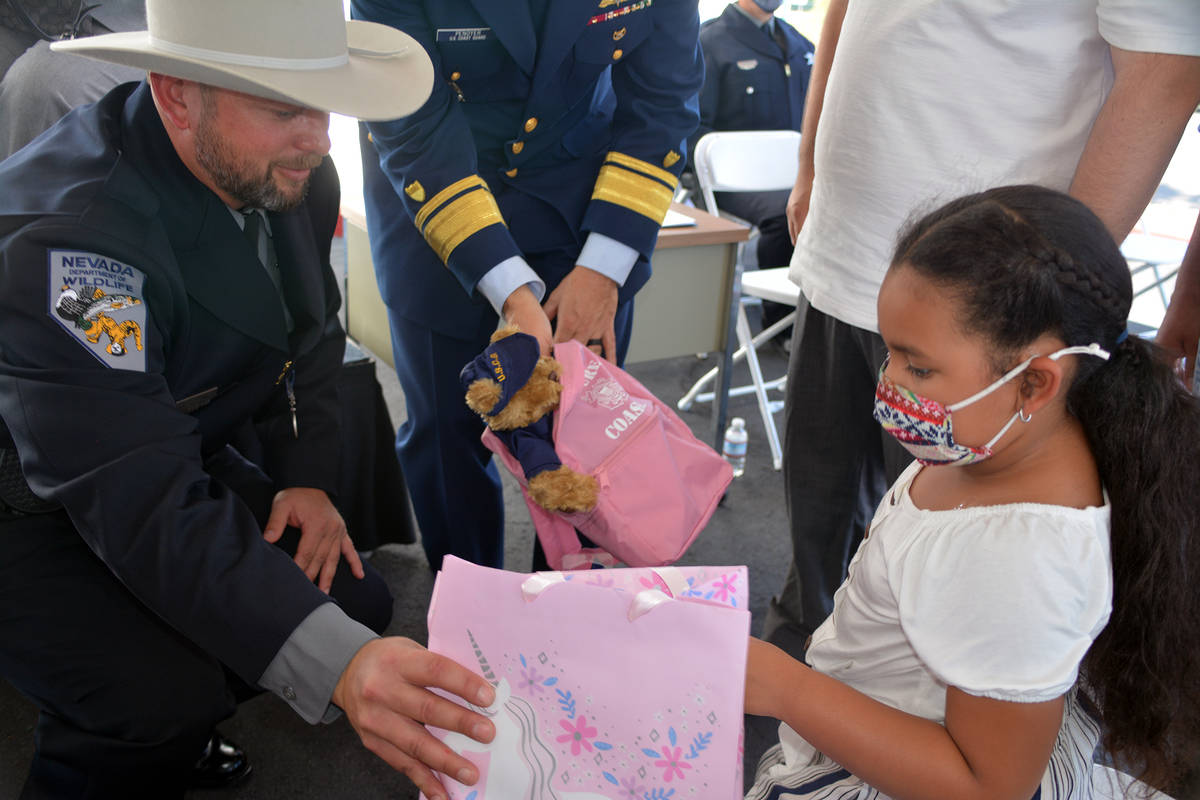 Celia Shortt Goodyear/Boulder City Review Nevada Game Warden Sean Flynn gives a gift to Leola Valladares-Polk, 4, during a presentation at the Nevada Department of Wildlife office in Las Vegas on Friday, Aug. 27. Flynn was honored for saving Leola's life during a boating accident on Lake Mead on May 10, 2020. 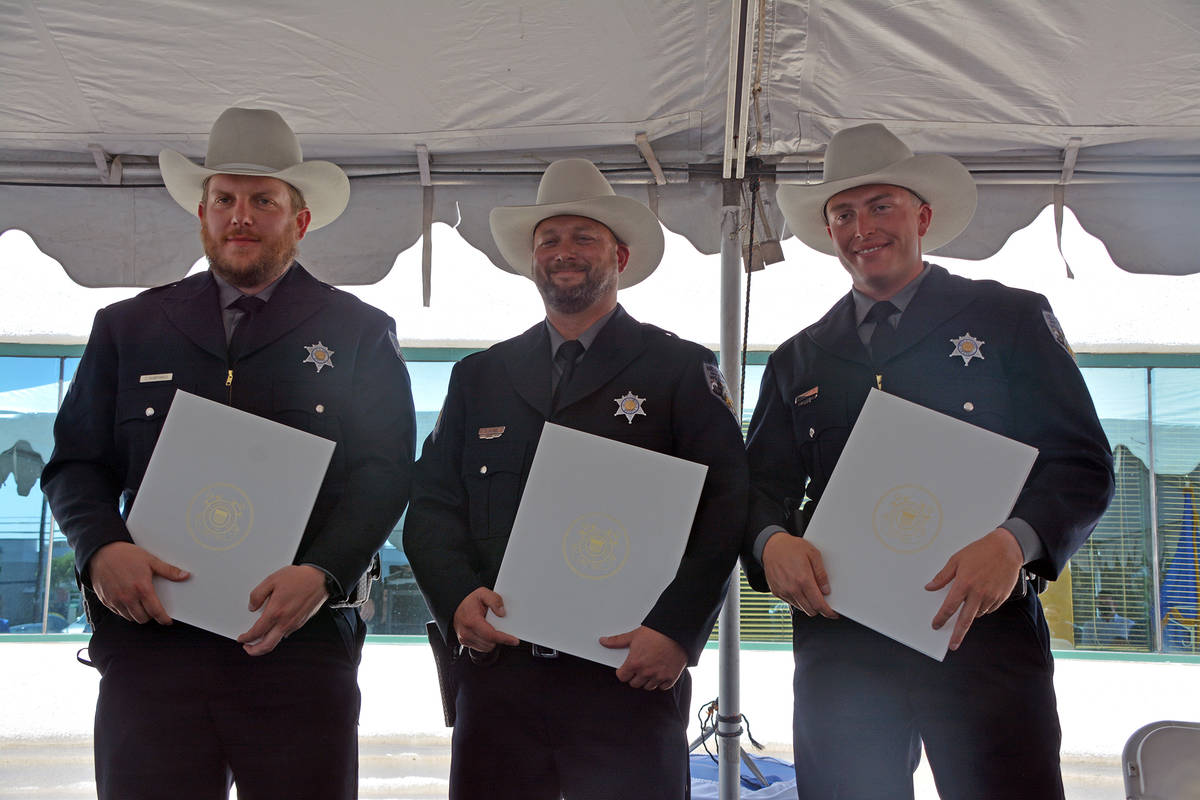 Celia Shortt Goodyear/Boulder City Review The U.S. Coast Guard honored three Nevada game wardens, from left, Casey Humphries, Sean Flynn and Thomas Hamblin, at special ceremony Friday, Aug. 27, for their roles in saving the lives of 12 people during a boating accident on Lake Mead on May 10, 2020. 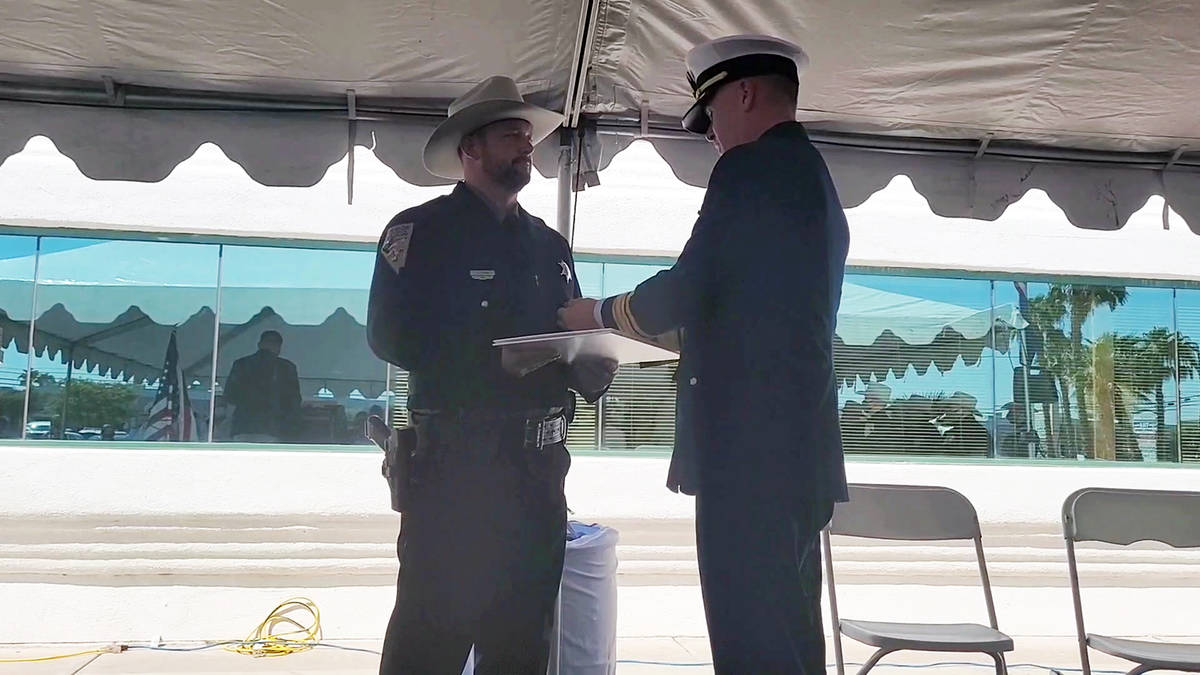 Celia Shortt Goodyear/Boulder City Review U.S. Coast Guard Rear Adm. Brian Penoyer pins the Silver Lifesaving Medal on Nevada Game Warden Sean Flynn during a special program Friday, Aug. 27. Flynn was given the medal, one of the U.S. Coast Guard's highest honors, for his role in saving the life of a 3-year-old girl during a boat accident at Lake Mead on May 10, 2020.

A Nevada game warden who risked his life to save a 3-year-old girl from drowning on Lake Mead was recently honored with one of the U.S. Coast Guard’s highest honors: the Silver Life Saving Medal.

On Friday, Aug. 27, the Coast Guard presented Sean Flynn with the medal for saving Leola Valladares-Polk when she was trapped under a capsized boat on Lake Mead. Fellow game wardens Thomas Hamblin and Casey Humphries were given the U.S. Coast Guard Public Service Award for their parts in the same rescue.

“I am very comfortable under water,” Flynn said. “I was very calm in that incident.”

On May 10, 2020, a dozen people on a church group outing were on a 20-foot-long recreational boat when it was pushed over a submerged reef and capsized due to sudden high winds. Hamblin and Humphries were first to arrive on the scene. They pulled 11 people from the water and worked with other wardens and the National Park Service on how to get to Leola, who was trapped under the boat.

Flynn then arrived at the scene to help after hearing about the incident on the radio.

“At that point, I’m looking down from my vessel and I see Leola’s grandfather with a flashlight and at that moment, it just kind of snapped and I was like, ‘We’ll need to go under there,’” he said. “I remember thinking that it was Mother’s Day, and the missing girl was about the same age as my son.”

Flynn said he then started to take off his gear and get into the water while Hamblin and Humphries held the boat and kept it from sinking more.

“I was basically holding on to the underside of the vessel and was making my way down (and) had the flashlight out,” he said. “I’m holding it with one hand … and as the vessel is going up and down; I end up seeing Leola’s arm. … The flashlight lit up her face. So she looked at me and I looked at her. She let out a little scream.”

From there, Flynn was able to take Leola to her family on the shore. She had been trapped under the boat for 30 minutes and had no injuries.

Flynn said the fact that she was wearing a life jacket was 99 percent of the reason why she survived.

“My small part of pulling her was the last one percent,” he said. “The life jacket is really what saved her life.”

He also credited Hamblin and Humphries for their help.

“Receiving this medal is truly an honor, but I would not have been able to do my part of that rescue without game wardens Hamblin and Humphries,” he said in a press release. “They were there prior to me and were able to secure the overturned boat to the shore. Without their actions, the situation would have been a lot different.”

During the ceremony, U.S. Coast Guard Rear Adm. Brian Penoyer said the Silver Life Saving Medal was created to “publicly thank heroic lifesavers” across the nation and not just those in the Coast Guard or the military.

“It’s significant to know that the criteria for the award of this medal is not simply the saving of a life, which is in itself meritorious,” he said. “It is rather heroic action at risk of life and limb.”

He said Flynn is one of less than 2,000 people who have been given this honor since it was created in 1874.

Flynn and Gloria Valladares, Leola’s mother, said the fact that his actions were being recognized was “an honor.”

“I couldn’t have been more appreciative,” said Valladares. “They made me a mother all over again.”

Flynn said he was calm during the rescue because of the training he received in his previous career as a SERE specialist with the United States Air Force.

SERE stands for survival, evasion, resistance and escape and Flynn said the training taught him how to move through and escape from water.

Flynn said he had found out about the U.S. Coast Guard giving him this medal a few months ago but he didn’t think the reality of it had set in yet. He also said he was thankful that it was bringing more attention to Nevada game wardens and that they do a lot more than just regulate hunting and fishing.

“We do a lot of rescues on the water,” he said.