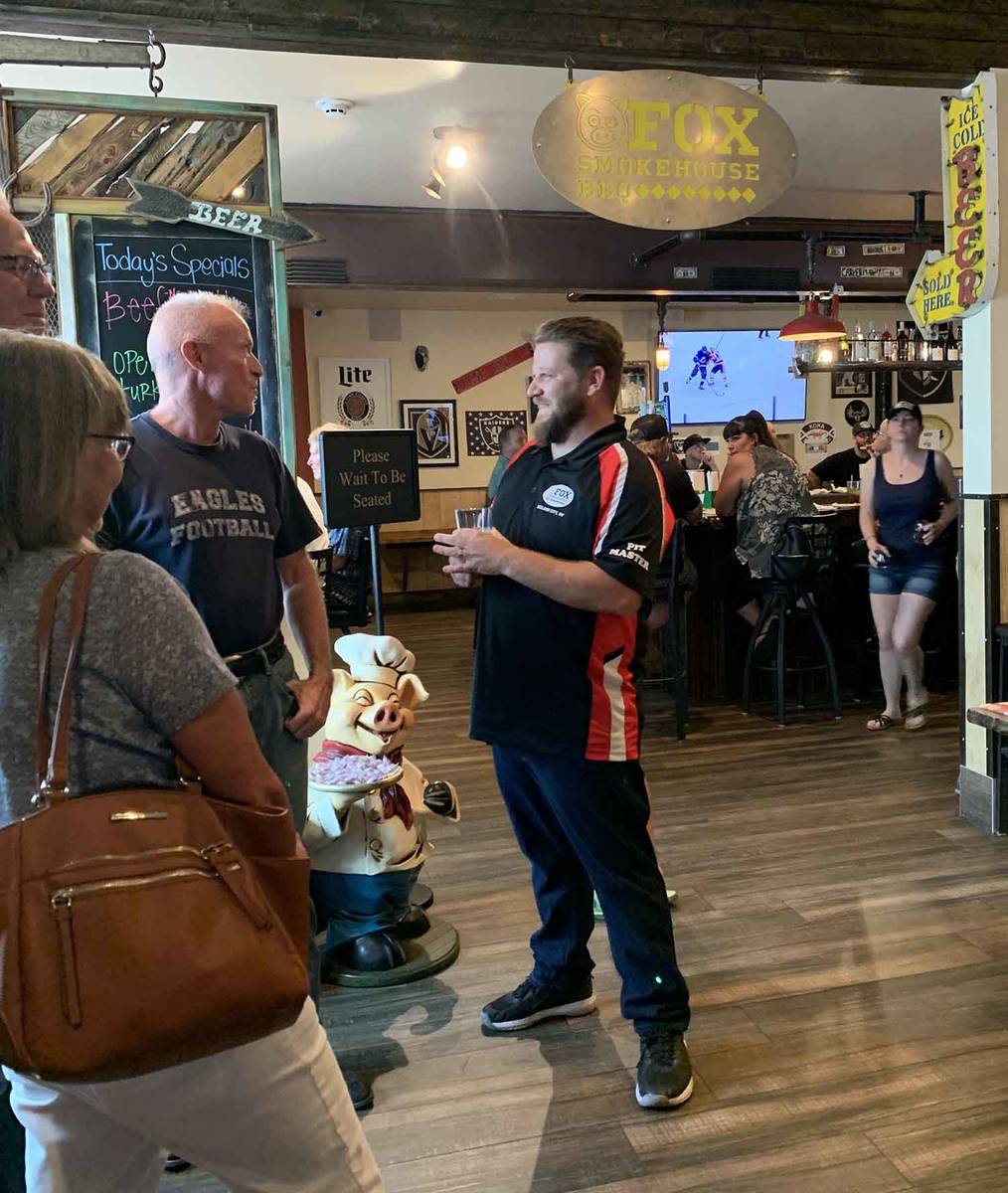 (Hali Bernstein Saylor/Boulder City Review) Mathew Fox, right, meets with supporters during a celebration Tuesday, June 15, at his family’s restaurant, Fox Smokehouse BBQ, to watch election results come in. With 1,988 votes, he is the unofficial winner of the City Council race. 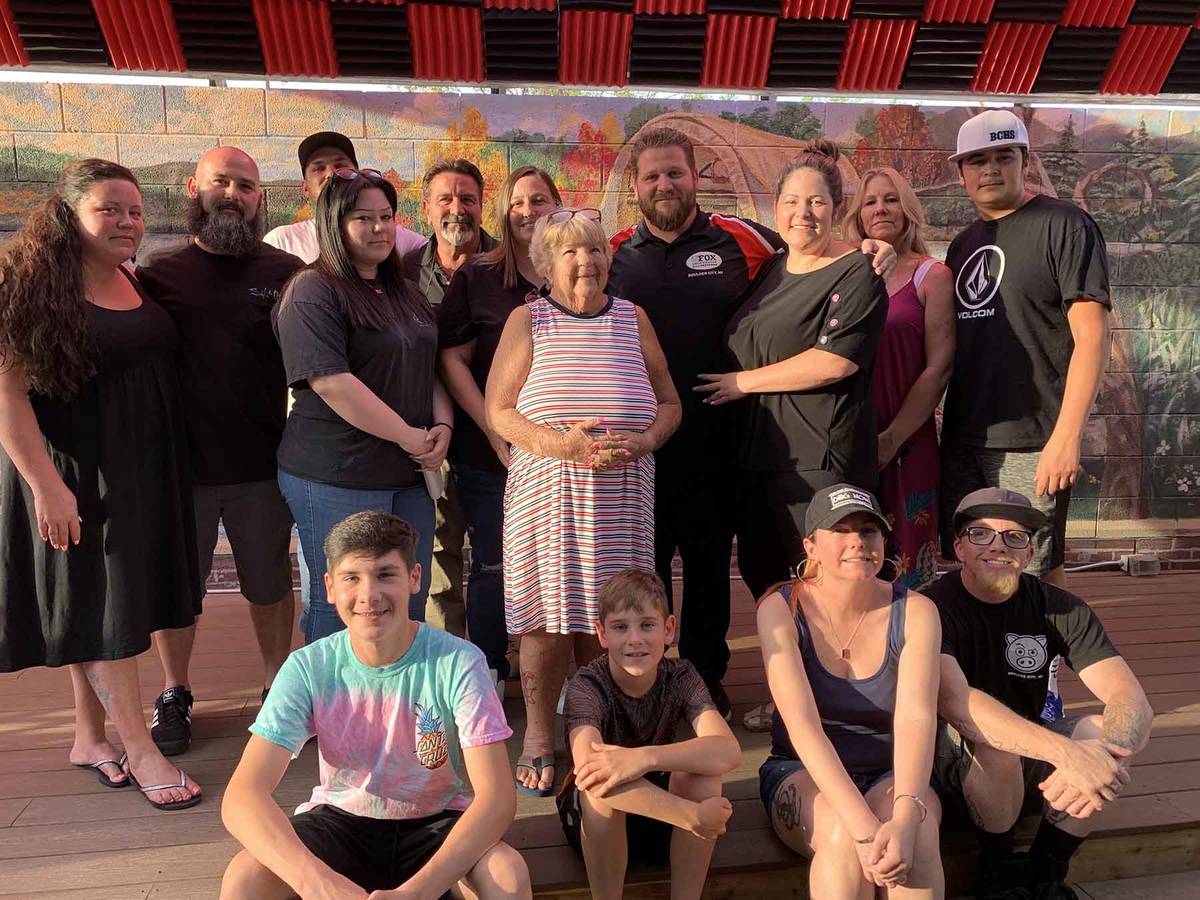 (Hali Bernstein Saylor/Boulder City Review) Mathew Fox, fourth from right in back, gathered with his family at their restaurant, Fox Smokehouse BBQ, on Tuesday, June 15, to watch election results come in. Unofficial results have him winning a seat on City Council with 1,988 votes. 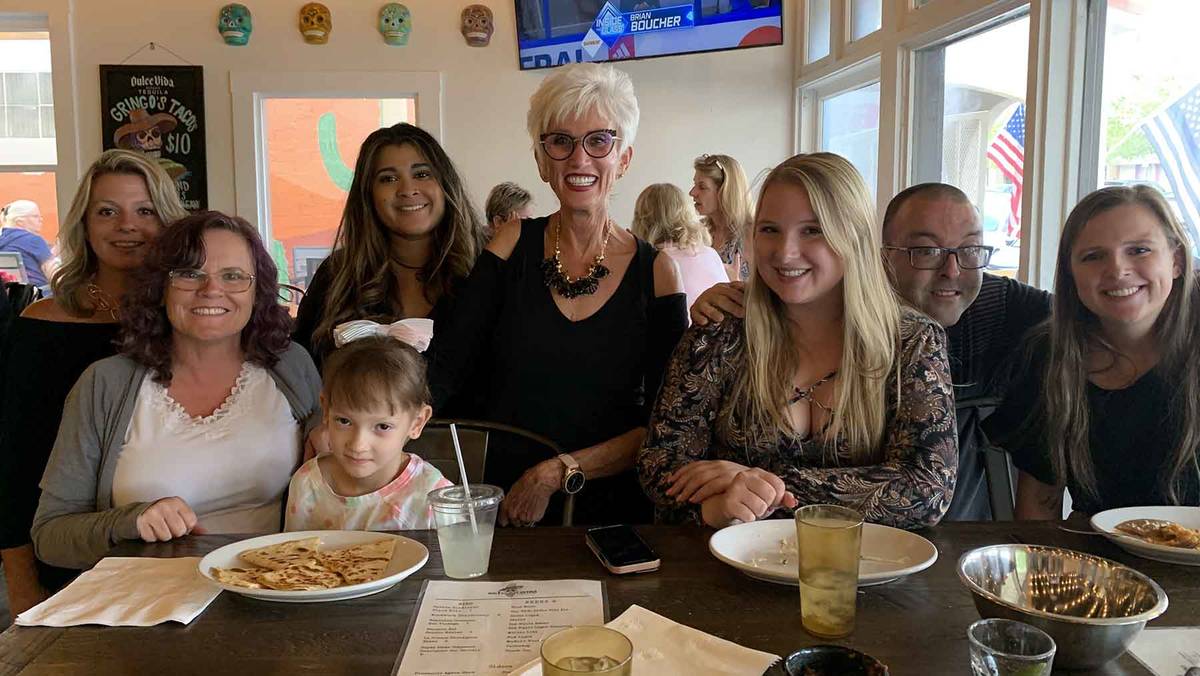 (Hali Bernstein Saylor/Boulder City Review) Cokie Booth, center, met with family and friends at several downtown restaurants, including Big T’s Cantina, to watch results of Tuesday’s, June 15, election come in. She appears to have lost her bid for a seat on City Council after receiving 47.86 percent of the vote. 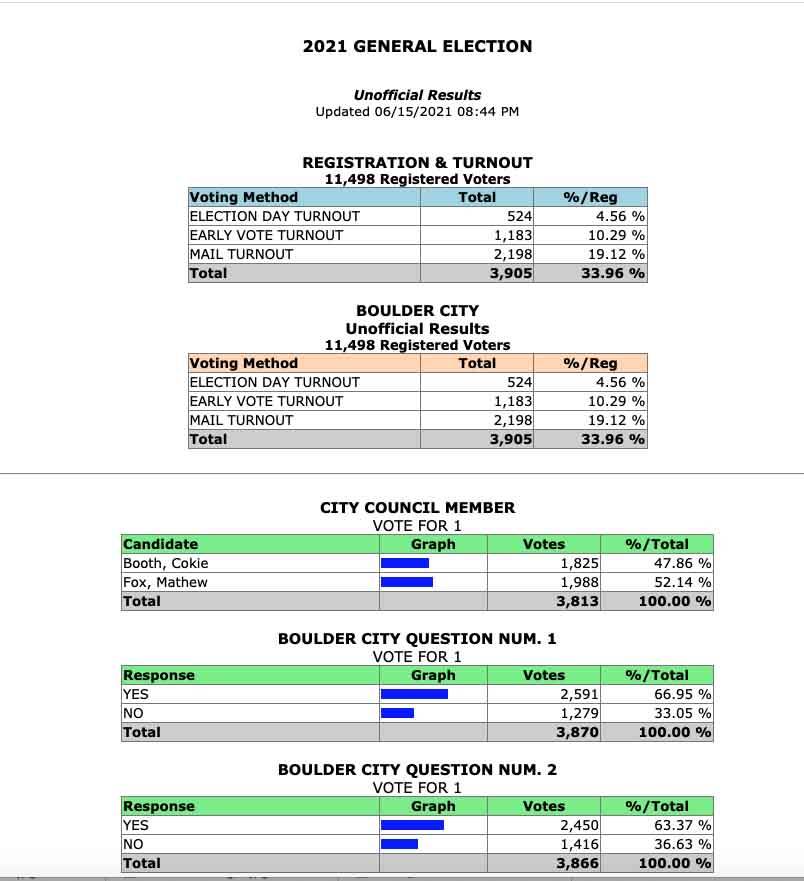 “I am very thankful to have such an amazing community and look forward to serving Boulder City in hopes to bring everyone together,” Fox said. “Thank you to all that have supported me and my family. Boulder City has been a blessing to us.”

“Thank you to all the amazing supporters, old friends and the many new friends I met along this journey. Life is a journey and this was a great point in my life because of you. I wish Matt success on the council and I will continue to be active in the community,” she said in a statement.

If the unofficial results are confirmed, he will be sworn into office July 13 along with Sherri Jorgensen, who received 2,227 votes in the primary and was elected to office.

The election also gave residents the opportunity to weigh in on building and financing a new community pool.

Ballot Question 1, which asked if the city should spend an amount not to exceed $7 million from the capital improvement fund for a swimming pool project as funds become available from the proceeds of the sale and lease of city land, appears to have passed with 2,591 votes.

Ballot Question 2, which asked if the city should spend the proceeds from the sale of land adjacent to Boulder Creek Golf Club, known as Tract 350, from the capital improvement fund as follows: 10 percent for public safety capital needs and 90 percent to fund a swimming pool project, appears to have passed with 2,450 votes.

“I appreciate the support of a clear majority of voters in approving financing options for the municipal pool facility,” said Mayor Kiernan McManus. “I want to thank all the members of the committee that worked so hard to find solutions for our aging pool. … The efforts of City Finance Director Diane Pelletier in developing a plan that would not result in any tax increase are also greatly appreciated. I believe the voters confirmed the plan that was determined by the committee for a project that is right for Boulder City.”

Additional mail-in ballots will continue to be counted until 5 p.m. June 24.

As with the primary, results of the election will remain unofficial until 9 a.m. June 28, when they will be canvassed by City Council.

Tuesday’s election saw 524 voters cast their ballots at the polls. During early voting, 1,183 ballots were cast and 2,198 mail-in ballots have been counted.

The election was the last odd-year municipal election. The city adopted an ordinance in 2018 to hold its elections in conjunction with state and federal primary and general elections. This coincides with Assembly Bill 50, which passed in 2019, to consolidate all odd-year municipal elections with even-year elections. The move is expected to save the city between $40,000 and $50,000 per election as well as increase the number of voters participating.

Boulder City Review reporter Celia Shortt Goodyear contributed to this report. She can be reached at cgoodyear@bouldercityreview.com or at 702-586-9401. Follow her on Twitter @csgoodyear.